Hello Readers! Today I bring you author Taryn Kincaid. Taryn lives in beautiful Bora Bora. Or wishes she did. When she’s not parasailing up and down the Hudson River, taking care of her aging pet walrus, or volunteering at the local animal shelter [oh, HELL, no], she loves to arrange her voodoo doll-pin collection and practice chanting. At this moment, Taryn is busy adjusting the tin foil to throw the CIA (Culinary Institute of America) off her trail. She hangs around a lot on Facebook and Twitter with her trillions of fans and pops in at Goodreads from time to time. You can catch her on her website, and her blog, where she lives for comments!
Website | Twitter | Facebook | Goodreads | Amazon
Earlier today I reviewed the third book in Taryn’s Sleepy Hollow series, Frost, from Decadent Publishing’s 1 Night Stand line (review HERE). Now Taryn is here to tell us about the fourth story, Blizzard (Decadent Publishing, The Edge Series, February 20, 2013).
BLIZZARD
By Taryn Kincaid
A short story from Decadent Publishing’s The Edge erotica line
BLURB:
Mandy Malone ditches her pharmaceutical convention and the married male colleagues hitting on her to hurry home to her waiting family. But she doesn’t bank on the blizzard that forces her off the road, into a deserted rest stop, and the rugged arms of the snowstorm’s only other road refugee.
Jack Manning is totally unprepared for Mandy’s unvarnished proposition, but intrigued by the erotic offer promising a night of no-questions-asked sex.
But when Jack notices the wedding band on Mandy’s finger, will he forego the lure of a torrid clandestine affair, or give in to the fantasy of blazing hot sex on the sly? 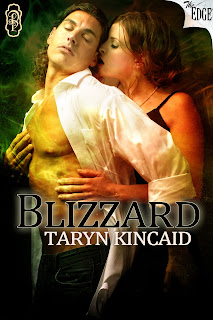 EXCERPT:
“Is this what you’re looking for, lady?”
Mandy glanced up, startled by the deep, rumbling baritone that seemed loud in the fairly quiet building. Even more startled by the tall, gorgeous hunk of manhood bundled into a down parka and standing next to her table.
I could totally jump him. Right here. Right now.
From nowhere, steamy erotic images of what she wanted to do with the man leaped unbidden into her head. Beneath her sweater, her breasts swelled, her nipples hardened with need. She’d never felt such instant attraction to anyone, such a frantic desire to get naked and get fucked. Maybe it was a reaction to her frightening experience on the Thruway. Or maybe something else created the overpowering chemistry.
Besides being the most handsome man she’d ever laid eyes on, he held out a battery-operated pocket charger. Nearly alone with him in the deserted rest stop…and still she felt…safe. A sigh escaped her as he stared down at her.
“It’s not the only thing I’m looking for.”  Her voice, husky and sultry, and laden with blatant sexual innuendo, shocked her. Where had those words come from?
“Yeah?” The man removed his parka, revealing a plaid flannel shirt, the triangle of a white, cold-weather T peeping from the open neckline. As he raised his arms, thick bands of muscle rippled across his chest, beneath the layers of fabric.  He stared down at her with brilliant azure eyes, bluer than a lake under the summer’s sun. His hair, which curled a bit boyishly at his temples, resembled a wet beach, light, dirty brown, with shimmering bronze threads straggling through the locks. But this was no boy. No indeed.
God. Gorgeous did not even begin to cover it. The longer he looked at her, the hotter she became. So hot she suddenly felt she could do anything, dare anything with this man.
BUY:
Decadent | Amazon | Barnes&Noble | All Romance | Smashwords | CoffeeTime