Today I have the privilege of welcoming back one of my favorite people, author Tigris Eden. Tigris is here today to share about her upcoming release in Romantic Tales: Bedtime Stories Episode Four.
Please welcome Tigris to That’s What I’m Talking About!
I first wanted to say a big thank you to Twimom for hosting us on the blog! We truly appreciate it darling! Again, thank you!
Originally I was going to do a cover reveal for Redeemed In Shadows, but sometime things get pushed back as life has a way on stepping to you and saying, “I’m here don’t forget about me,” so here I stand corrected and am addressing things that are going amuck in my life. Stories are still forthcoming, and yes very slowly.
Instead let’s talk about what is going on March 29th. I am excited as are the girls who co-write with me on Romantic Tales: Season Two is going to be very different. You still get your variety of Genres, and still has the Romantic Plots. Riley is continuing her story from the first season and takes you on a journey of after the wedded bliss. Mike and Juliet are both trying to navigate their way their new life, in Nothing Else Matters. Ty and I have travelled a different route. She is going to give you the long anticipated sequel to Decadent Dreams with Jessica and Nik’s story in Mail Order Groom.
I am happy to say The Genesis Project is not lost, and will be making an appearance as a full length novel. It won’t be featured in Romantic Tales, but as a Trilogy. You will get more of Gen, Xander, and Adam but at a later date. There will be a re-release of GP but with extra content added that will also pave the way for the sequel to The Genesis Project which has been titled Origins. But I hope that what is read in Episode four will still spark the interest of those into Sci-Fi/Futuristic items with a lusty helping of Romance.
I hope you enjoy the blurb, we welcome all comments! 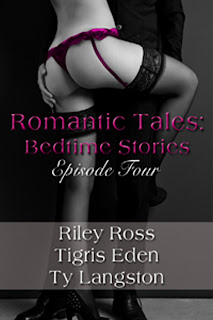 Romantic Tales: Bedtime Stories Episode Four
Release Date: March 29, 2013
By Riley Ross, Tigris Eden and Ty Langston
In Season 2 of Romantic Tales: Bedtime Stories the authors have all added a little something more. Ms. Ross continues with Mike and Juliet’s Contemporary Romance, in Nothing Else Matters. This story takes place after the wedding. Ms. Eden takes you on a journey three thousand years plus into the future where female assassins get down to business in Red Hawk Mercenary Group: Ghost. Ms. Langston brings you into a world of Contemporary Romance where a woman can go online and order the man of their dreams in Mail Order Groom.
Read a book before bedtime and fall in love with Romantic Tales.
Nothing Else Matters
Nothing Else Matters is the sequel to ‘The Getaway’. Juliet and Mike Williams are adjusting to life in Hillsboro, Ohio. While Mike is working on opening a bar with his brother, his beloved Jules is attempting to be a domesticated goddess. And once again the gloves are off between Mike’s evil mother Elaine and Juliet. From subtle to blatant insults, Juliet has to struggle with playing nice.
When a shocking secret is revealed, will it tear their family apart?  What will Mike do when he finds out that someone extremely close to him has been keeping a huge earth shattering secret from him?  Can Mike and Jules survive this latest challenge that will surely test the foundation of their own happily ever after?
Red Hawk Mercenary Group: Ghost
In the year 5051, Earth looks the way it did almost three thousand years ago. There’s only one problem; everything is artificial. Even the air is man-made.
With only two life sustaining zones, New Mecca and New Zion; life can be harsh if you’re banished to the outlands. There it’s every man, woman and child for themselves. Those said to live there are “lawless” and “unstable.”
In a society of haves and have not’s the unjust quickly rise to take advantage of those fighting to survive.
Rebekah Beecham aka Ghost has never played well with others. Rescued from her own personal hell by the infamous Reverend Mother, Bekah prefers to work alone.
But when a job gone wrong lands her in the back of a van, things go from bad to worst in one night.
How Archer ends up with a butterfly in his nest, is news to him. Any man would kill to have a rare beauty like her within their grasp; if she’ll just stop taking his legs out from under him. Literally.
The two form an unlikely bond that sets them on a trail of a killer. Bodies are being found in the unlikeliest of places where inhabitants of New Mecca and New Zion strive for perfection.
Will the two find common ground or will they kill each other in the process?
Mail Order Groom
Jessica Brooke is a successful scientist set to embark on an experiment that could change the world.  The young woman seemingly has the world at her feet, until she finds out that her long-time boyfriend broke up via internet. With her world turned upside down, her friends Beth and Kelly urge her to go onto the online dating site “A Foreign Affair”.
She does this with mixed results until she encounters, Nik Stenslav, a self-made millionaire who recently lost both of his parents.

Will the internet bring them together, or bring a world of crazy into their lives? Find out in this long-awaited sequel to ‘Decadent Dreams’.