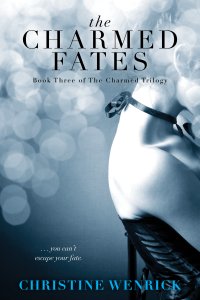 The Charmed Fates
Author: Christine Wenrick
Release Date: Feb. 18, 2013
Publisher: Red Treehouse Publishing
The Charmed Trilogy, Books #3
Genre: Paranormal Romance
Format(s):  e-book
Book Source: Publisher
About the book:
“You think you know him better than I do? Interesting . . . and so boringly human.”
Over a year has passed since Olivia Ann Greyson discovered that she is a Charmer, a Dhampir fated to be part of the violent supernatural world that surrounds our human one. In that time, she has strengthened herself physically, learned of her family’s secret past, and found a deep and abiding love with the strongest man she has ever met, Daywalker Caleb Wolfe. But Olivia’s biggest challenge still lies ahead of her . . .
Dark vampire lord Luther Davin has been obsessed with capturing Olivia so he can use her special gifts for his own reasons. As Caleb and Olivia try to make a new life together with their coven, the Nightwalker’s attempts to capture her only intensify and inadvertently bring an unwelcome visitor from Caleb’s past barging back into his life.

She is Caelestis—Celeste to the modern world—and she claims to be Caleb’s first and rightful mate. Although Olivia has grown confident and secure in her relationship with Caleb, she soon realizes that Celeste sees herself as no less than a Goddess among mere mortals and will stop at nothing to get Caleb back—which means Olivia herself must die!
When these two threats collide and fate steps in to pull Olivia away from her new family, will she be ready for her darkest hour and her greatest battle?
What Nima’s talking about:
The Charmed Fates is the third book in The Charmed Trilogy.  The books are a consecutive read and need to be consumed in order. It’s tough to give a fair review this final installment without spoilers, but here goes.  Overall, I liked the series, and I liked this book.  It was very well developed for a debut author, and I think worth the time investment.
The story begins slowly while Wenrick gives us a little time to enjoy the hard won domestic bliss from the first two books.  Then there is a lot, perhaps too much in my opinion, of everyone trying to protect everyone else.  It was obvious to me that they needed to work together, and I admit to some impatience, but this is how characters grow.  They do get there eventually.  The action and tension of the story are strengths of Wenrick’s writing, which builds to a satisfactory conclusion.
The only two real criticisms I have in an otherwise terrific tale are regarding the disposition of two particular characters.  Caelestis or Celeste, is Caleb’s ex-mate.  She had the potential to be the source of much more humor or much more evil.  I felt she was under-utilized.  The second character was Luther Davin.  His connection with Olivia has run through all three books.  In The Charmed Fates his truly evil nature comes to full light, and when we arrived at the ultimate conflict, it seemed slightly anti-climatic.  I expected it to be more drawn out.
There is less sex this go-around, but it’s still hot and timely.  It feels natural to the flow of the story, not like the characters are being forced “get it on” because they haven’t in so many pages.  Olivia’s music does still play a role in her relationships and personal growth as well.
Lycans were peripheral to the overall story arc, and I felt they should have been a stronger presence in the climactic scenes. However, the excerpt from the first book in Wenrick’s next series, The Men of Brahm Hill, which builds on the foundation of The Charmed Trilogy, suggests we’ll get to know them better.  The Charmed Fates ends Olivia and Caleb’s story, but I have no doubt they’ll appear in future stories as Wenrick explores the world and characters she has created.  There is a significant depth there to be mined.
Nima’s Rating:

One response to “Review: The Charmed Fates by Christine Wenrick”