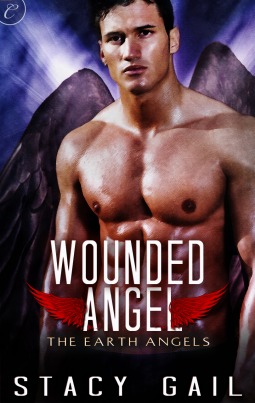 Author: Stacy Gail
Release Date: May 27, 2013
Publisher: Carina Press
Earth Angels #3
Genre: Paranormal Romance
Format(s): e-book
Book Source: Author
A descendant of the Angel of Vengeance, Nate da Luca was gifted with an uncanny ability to find things. It made his job as a detective a breeze—until he learned the hard way that some things should remain hidden. After that, his powers vanished, along with his belief in himself. Which is going to make tracking down Gabriella Littlefield for his latest client a challenge.
Personal trainer Ella Little paid a hefty price for her life—now all she wants is to live it in peace. Then a sexy hulk of a man turns up in her gym, reigniting desires she thought she’d left behind along with her real name and hair color.
Desires she can’t deny even after she discovers Nate’s no stranger to her dark past.
Before he can convince her the attraction is mutual, Nate’s going to have to earn Ella’s trust. But a demon is playing for keeps in the world of humans, using Ella as bait, and the last thing they have is time.
Wounded Angel opens like a playful game of cat and mouse. We are introduced to Ella who is hiding deep undercover, running from something in her recent past. She’s leery of everyone, but for some reason can’t help herself control when it comes to her new client at the gym, Nate da Luca. Meanwhile, Nate is searching for someone, and he thinks Ella may be his prey. In the beginning, I can’t tell if Nate is going to be the good or bad guy, and it’s a mystery as to why he’s hunting down Ella. What we do know is that he’s experiencing a very strong attraction to Ella, regardless of who she may or may not be.
The opening of the story captured my interest quickly. I honestly couldn’t tell if Nate was good or bad, based on the story alone (although it is clear from the book blurb, he’s the hero). Ms. Gail reveals pieces of Ella and Nate’s shared past in little chunks, hooking the reader and driving them to learn more. It’s well played and makes for an exciting read. Even after the reader (and Ella) finds out Nate is good, the story remains suspenseful enough that I just couldn’t put down the book.
I like both main characters. Ella is spirited and a fighter. She survived a horrible ordeal and a messy aftermath only to come out stronger. Although she is pretty much alone, she’s found two trust-worthy friends at her place of employment. They help train and protect Ella so she’ll not be a victim again. So I found it a bit odd that Ella refused to trust the instincts of her comrades when they warn her something is up with Nate. I found Ella to be immature when she refused to be careful, which seemed against her character up to that point in the story. However, in the end, although their concerns were spot on, it all works out for the best.
Nate is a bit more difficult to follow and characterize. He knows what he is: a descendant of the Nephilim. But due to his mother’s crazy actions, he has been mentally and physically scarred. He’s lost most of his special abilities and is plagued by bizarre nightmares and waking dreams. I found the dream part a little confusing and odd for a while, which made reading a little difficult. However as the story progressed, all of the pieces fell into place. It took a few “ah-ha” moments until I had a better understanding of the big picture.
Together, the pair had good chemistry, but I found their banter detracted from the heat of the moment. Their first time felt awkward to me, but the intent was positive; both Ella and Nate admitted to and gave into their attraction. The big thing: Ella trusts Nate, which moved the story forward.
Wounded Angel is another entertaining story in the Earth Angels series. I am fascinated with the series mythology revolving around human descendants of Nephilim. I really liked that we got to see the Nephilim working together as a unit (via internet), bringing back the h/h from the earlier stories. It helped keep the overall story arc cohesive. I liked the slow reveal of the “bad guy,” but am left wondering why he’s so bent on destroying all of the Nephilim. Is it simply because they can potentially defeat him? I am eager to find out more…
I enjoyed both Ella and Nate. Individually they both were interesting characters and both underwent substantial emotional growth in the short timeframe. I adore how they realized that only together and in their mutual love could they overcome the evil. It was very touching. Their union/love also allowed for much of that emotional growth I mentioned. I do feel that their sexual chemistry felt a little flat. Their scenes were smexy, but I just didn’t feel as deep of a connection as I wanted to. I think some of that was the silly banter. But in the end, their love felt natural and unforced.
Overall, I recommend Wounded Angel and the Earth Angels series… Interesting, exciting and sexy!