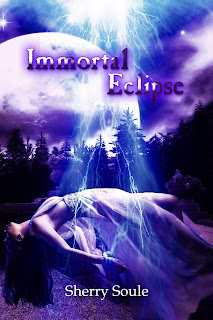 Immortal Eclipse
Author: Sherry Soule
Release Date: April 19, 2013
Publisher: Disenchanted Publishing
ISBN: 978-0976180487
Genre: Paranormal Romance
Format(s): paperback (362 pgs), e-book
Book Source:  author
Mystery, Murder, and Manolo Blahnik….A devoted fashionata and practical New Yorker, Skylar Blackwell doesn’t believe in the supernatural–until she inherits Summerwind Mansion. . . .
When her uncle is brutally murdered, and the cops seem uninterested in following up the case, Skylar journeys to California to seek answers. Her search for clues is soon overshadowed by haunting nightmares of a young woman also murdered in the house.
Now the inhabitants of Summerwind are mysteriously dying, leaving no evidence as to how or why, and Skylar finds herself in a deadly race against time to expose the killer–before they strike again.
The problem is . . . whoever it is may not be human.
Armed with only wit and Pradas, Skylar begins questioning the servants, but the growing list of suspects includes the sexy and brooding caretaker, Dorian, a man desperately trying to forget his tragic past. And a major distraction for Skylar.
Determined to play detective–instead of the fashion police–and unravel the dark history of the mansion, Skylar is plunged into an otherworldly mystery that not even she can explain away. As the boundaries between reality and dreams blur, Skylar’s greatest challenge is to stay alive long enough to learn the truth.
HOOK
Immortal Eclipse is Pet Cemetery meets Picture of Dorian Grey meets Charmed.  Three of this reviewer’s favorites.  Expertly written in first person, present-tense, Ms. Soule weaves the tale of Skylar, her great losses, and Dorian. Given that great personal loss has found them both, it’s no wonder they’re seriously attracted to one another!   HEAT INDEX:  1 out of 5.  Some steamy kisses, heavy petting…nothing to write home about.  I’d almost put this in the older YA or that ‘new adult’ category, except it’s paranormal.
What’s not to like about a sassy, spunky, sexy & snarky main character – the voice of the story – that has a serious shoe fetish and considers her fashion-sense a weapon?!?!  Skylar certainly embodies the heroines that I’ve grown to love from some of my favorite series.  Leaving behind her home of New York City, Skylar travels to California to stake her claim on the homestead that was bequeathed to her by her recently deceased uncle, Gerard.  Upon consultation with the estate lawyer, Skylar learned she needed to stay 30 days in order to collect her inheritance.  Yay!  Time for a vaca, and a welcome break from her insincere existence in NYC.
Here’s where things get flat-out weird.  Murder and mayhem ensue upon arrival.  It seems as though Skylar is the harbinger of death, where Summerwind and it’s residents are concerned.  Not to be outdone, blossoming love is on the horizon, even though death knocks at the gates of Summerwind.  Dorian is conflicted by the mere presence of Skylar, and has to figure things out, apparently.  Even though I’m kind of over the ‘it’s in your best interests if we’re not together’ trope, it sorta works for me in this title.  Dorian is, of course, the resident hottie.  The caretaker of the estate, he’s got his fingertips on the pulse of what’s going on.  Superficially, anyway.  I actually shouted at Dorian a couple times, ‘Dude, get IN there!’  Ms. Soule could have definitely made this a dirty, dirty book, but kept things chaste and sweet.  I’d let my 16 year old daughter read it (if she read stuff like this).  Dorian has many admirable traits, including his chivalry – he always seems to be swinging in to save the damsel-in-distress.  Selfless is another term I’d use to describe him.  Ultimately, however, Dorian keeps a secret for most of the title that could be his undoing when it comes to his relationship with Skylar.  And damnit!  It would’ve been a complete deal-breaker for me, had I learned that news at that specific point-in-time!
Our cast of supporting characters seemed to dwindle in size as the novel drew to a close.  Here’s a spoiler (but not really):  If only three characters live, which three do you think they’ll be?  Muahahah!  Now, you’re going to have to read the entire title in a day.  You can thank me later.
I thought Ms. Soule did an exceptional job pulling-off the first person, present-tense narration.  By choosing to narrate through Skylar, and getting backstory tossed in with Skylar’s dreams, I felt it was quite effective.  I also enjoyed the plethora of conflict.  The characters were ALL flawed, and ALL tortured.  I suppose that is one of the reasons I liked this title so much:  the characters all had a deep-seated need for redemption.  None, however, were as  clear-cut as Dorian’s.  It was painful to watch Dorian’s suffering from Skylar’s point-of-view.  We never got a glimpse inside Dorian’s head to see what he was thinking.  We never got to see what he did after Skylar left.  This is one thing that I thought was difficult as a reader, because I felt more of a connection with Dorain than I did with Skylar.
Overall, I really liked and connected with Ms. Soule’s Immortal Eclipse.  I felt she did an exceptional job with her character development, and the writing was tight, descriptive, and even humorous in difficult situations.  Her plot lines were clean and well-developed in most cases.  I’d definitely pick up another title by this author.