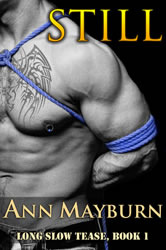 Still
Author: Ann Mayburn
Release Date: April 9, 2013
Publisher: Honey Mountain Publishing
Long Slow Tease Book 1
Genre: BDSM Contemporary Romance, FemDom elements
Format(s): e-book
Book Source: Author
Dr. Michelle Sapphire and Gunnery Sergeant Wyatt Callahan formed an unbreakable bond and an unacknowledged, forbidden attraction to each other while serving together in Afghanistan. Their lives are forever changed when a mortar attack grievously wounds Wyatt and Michelle brings him back from the brink of death. But when they both return to the civilian world, Michelle discovers that her rock-solid Marine is suffering from severe PTSD and may even be suicidal.
Wyatt Callahan fell hard for the aristocratic blonde doctor the moment he laid eyes on her. After reentering civilian life in his hometown near Austin, Texas, Wyatt is plagued by nightmares of the death and suffering he witnessed during the war. He’d love to reach out to Michelle, but — Michelle is a Dominatrix, and she has made it very clear to Wyatt she isn’t interested in a relationship with anyone who doesn’t accept her lifestyle. An Alpha male to the core, he can’t imagine the appeal of being submissive. At the same time, the idea of serving Michelle, of being everything she wants and needs, rings true in his wounded soul.
Michelle has dark secrets of her own, and together with Wyatt she will have to battle her personal demons during their emotional journey of healing, redemption, and love.
Firstly, I was thrilled to have the opportunity to read this new novel by Ms. Mayburn, as I’ve read quite a few of her stories and have yet to find one I didn’t like. Secondly, this story encompasses two topics I tend to be very greedy about reading, in no small part because both deserve far more attention than they generally get: the effects of PTSD in the brave men and women in uniform who fight for our country, and the BDSM lifestyle, which certainly hasn’t always gotten a fair shake in popular media and literature. I think it’s wonderful that Ms. Mayburn is tackling these subjects, and I was pleased to see both in such good hands.
One of the things that works best about this story is that both of the main characters’ PTSD appears as independent problems which are established on opposite ends of the path they’re both navigating, while the idea of the BDSM lifestyle as a means of healing and relief lies in the middle. Both Michelle and Wyatt have been shouldering their burdens for a long time by themselves, but it’s not until each learns to redefine what it means to let go that they are able to see that a better future lies ahead of them. It’s an intriguing idea, and, in Michelle and Wyatt’s case, it works extremely well.
An important and well-made point that Wyatt learns in Still is that submitting does not equate to weakness or loss of control. Alpha through and through, he’s been trained to keep his troubles to himself and be the rock that others can depend on in their own time of need. But, Wyatt’s PTSD manifests in a variety of symptoms, most notably debilitating flashbacks which leave him feeling alone and scrambling for solid ground where there is none. Michelle’s understanding of what he’s going through, combined with their mutual attraction and shared combat experience, plus her inherent strength as a Dominatrix, makes her the perfect person to lead Wyatt towards the peace he so desperately needs. In turn, Wyatt comes to accept that Michelle’s pleasure makes him happy (and why not—he’s been attracted to her for years), and by pleasing her through his submission, he finds inner strength and true happiness of his own.
It is a parallel lesson that, fittingly, Michelle must learn for herself in her role as Wyatt’s Domina. As a Lieutenant and surgeon in Afghanistan, she was the epitome of control. Unswervingly determined and often overbearing, there was nothing she wouldn’t do to save the lives of those brought to her, broken and dying, from the front lines. In her life as a Dominatrix, she’s become an expert at hiding her own pain in order to be strong for her sub. Her desire for Wyatt, combined with her resolve to help him find some sense of optimism through purpose and reward that only a sub, specifically her sub, can understand, blinds her to the fact that she can’t be the Domme he needs her to be if she’s trapped by her own past. Eventually, she realizes that by allowing him to help carry some of her pain, she’s allowing him to be the sub he truly needs to be.
In the forward to the story, along with other important details and information, Ms. Mayburn tells how the idea for Still came to be, and it’s definitely not something to overlook. In the effort to explore every possible avenue available to assist servicemen and servicewomen suffering from PTSD, and specifically in the case of Michelle and Wyatt, the BDSM lifestyle makes perfect sense. Based on trust and control, the dynamics of these relationships aren’t what they’ve often been made out to be, as Ms. Mayburn takes great care to show. Coming home may be a blessing for those who serve in the Armed Forces, but very often it simply isn’t enough to keep the nightmares from following, and our returning heroes deserve nothing short of the very best help that is available. I am extremely excited that there will be more of Michelle and Wyatt’s story yet to come, and can’t wait to see how the two of them will fair in the future.

One response to “Review: Still by Ann Mayburn”