Today I have the honor of bringing to you one of my favorite people, paranormal/ sci-fi author PJ Schnyder. Born and raised in the North East, PJ spent her childhood pretending to study for the SATs by reading every fantasy and sci-fi novel she could borrow from the local and school libraries. She scored fairly high in the verbal portion. 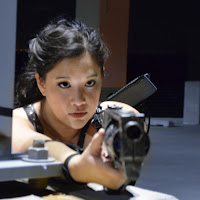 She was introduced to the wonderful world of romance a decade later by her best friend at an anime convention in Seattle.
She now lives somewhere temperate watching the seasons go by with her two dogs and super stealthy ninja kitty, writing her stories and gaming.
PJ is here today to talk about her new release, Bite Me, the first book in her new London Undead series. Keep reading to learn more about her book and enter an awesome GIVEAWAY!
Please help me welcome PJ toThat’s What I’m Talking About.
Werewolves, hunting zombies, in London!
As a writer, I tend to keep an eye on calls for submissions, especially when they’re from my editor.  Back in fall of 2011 and likely earlier, Mallory Braus included a request for a “zombie hunter romance” in her call for submissions via Carina Press.
On reading that, I giggled. And then I had an idea. That idea almost became a whole bunch of different things. The final result, though, evolved into the London Undead series and I am very happy Mallory and Carina Press acquired it. I’m elated to celebrate the release of the first book in the series, Bite Me.
The moral here is to have fun imagining what you’d do in a zombie apocalypse and also to keep an eye on those calls for submissions. You never know when inspiration might lead to a great match. 😉 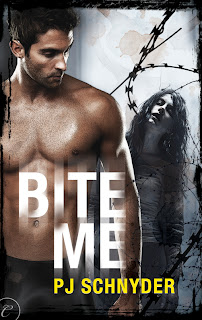 Blurb:
Few people walk the streets of London since the zombie outbreak, but that’s not an issue for Seth. As a werewolf, he can handle himself and save humans reckless enough to take a nighttime stroll. While on patrol he comes across a group of people under attack. The one woman brave enough to take a stand against the zombies catches his eye—and not just because of her way with a gun. Learning the beautiful woman is homeless and fends for herself despite her disability only intensifies his urge to protect and care for her.
Maisie can’t help but admit that she’s attracted to her werewolf rescuer. She’s drawn to Seth’s strength and ferocity, and finds herself opening up to him in ways she never imagined, even though she’s determined to not to rely on Seth or anyone else. She doesn’t want another person to get hurt—or die—for her sake. She has enough scars, physical and emotional, from the last time…
But when Seth realizes something is drawing the zombies to Maisie, there may be nothing he can do to save her….

Giveaway: In celebration of the release of Bite Me, PJ is giving away a prize pack of Bite Me themed items including a spiral-bound notebook, signed cover flat, signed bookmark, and 1Gb USB flash drive pre-loaded with an e-copy of Bite Me.

Open to International entries. Follow the instructions on Rafflecopter to enter.
Play find the PJ around the Internetz:
Website: http://pjschnyder.com
Twitter: @pjschnyder
Facebook: https://www.facebook.com/AuthorPJSchnyder
And be sure to stop back later today for my review of Bite Me!