Hello Readers! Today I bring you author SM Blooding. SM lives in Colorado with her pet rock, Rockie, Ms. Bird, the Chicken and SistaPITA. It’s quite the zoo. She’s taken a break from the piano, which Ms. Bird is quite happy about, and now knows more than one word in Arabic. Basically, she can say hello, good-bye, give it to me, and hurry up! 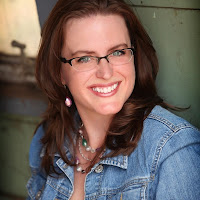 She’s dated vampires, werewolves, sorcerers, weapons smugglers and US Government assassins. Yes. She has stories.
SM is here today to talk about the world-building in her new release, Fall of Sky City (Book 1 of the Devices of War Trilogy). Please help me welcome SM to That’s What I’m Talking About.
Thank you so much for having me and letting me talk about the coolest part of this series, the world building. I have to say that building the world for this trilogy has been more challenging than any other series I’ve ever written. There have been so many discoveries along the way, but let’s stick to the Top 10 World Building Moments that led to what we have now.

10. The Solar System
It would be silly of me not to mention it. This solar system is how the whole idea behind the book began. I wanted to do something wildly different, so I took the coolest solar system that I’d been building over the past several years and said, “Let’s write a book.”
9. Understanding the Seasons
Looking at this system (which is hanging from my ceiling), you can see that everything is going to be different. Day, night, seasons, years, everything. The biggest impact was winter, which spans up to five years at a time. It’s like a mini ice-age every turn. So in order to survive this, all the cities and civilizations had to develop around the ability to move. This led me to thinking. What are some of the different types of cities we could have that would allow us to be mobile?
8. Discovering the Air Ship
The easiest way, of course, is to be on a ship. That was kind of a no brainer. My favorite steampunk element is the air ship. I love ‘em! I knew as soon as I said “steampunk”, there was going to be an air ship.

7. Figuring Out How to Keep the Ship in the Sky
But this led to several troubling questions. I couldn’t rely on what other authors had done because they were alternate histories of Earth. We’re on a different planet. Who’s to say they know what hydrogen is? Were they able to study elements the same way we did? I’m sure someone somewhere on their planet is doing something similar, but were they able to make the same leaps?
The answer I came up with was yes and at the same time no. Life on this planet is very symbiotic. So with that in mind, my next question was, what creature could I put in the sails of this ship so that would allow it to float? I discovered that I have a secret love affair with the jellyfish. Even I didn’t know this, but every time I dipped a toe into research mode, it came out “jellyfish”. So on this planet, we have several different types of jellies, one of which is the air jelly.
5. Keeping the Air Jelly Alive
Now, in my travels on this newly developing world, I came across some interesting knowledge. The air jellies volunteer to be harnessed to the air ships and in return, the airmen keep them safe from the sky cats! We’ll get to them in a minute. But this also opened my mind to the vast ecosystem of the sky and how the air ship has to somehow incorporate that in order to exist.
I tripped upon this fantastic website called The Featured Creature, where I discovered the Chinese Dragon Worm and the feather starfish. At this point, my brain pretty much exploded. Between this and the Blue Dragon nudibranch, which keeps the toxicity of the jellyfish to a minimum so they’re not inadvertently killing the crew, I had a pretty good start to a working ecosystem.
4. Killing the Parasites
When you have an ecosystem like this, you’re going to have parasites. Actually, Miss Think and Miss Sunshine pointed out how cool parasites could be. I think they were trying to gross me out. They succeeded that night, but it got me to thinking. Parasites really do happen everywhere. What would happen if a…iridescent feather worm started infecting the ship? What if they preyed on the red feather worm that the El’Asim fleet relies on to feed their air jellies? What if one of the air jellies at one of the iridescent feather worms and was poisoned by it?
SistaPITA decided that we needed to have spitfyre falcons to protect the ships. The leaders of the El’Asim go to the volcanoes of the Koko Nadi Islands and chose one egg each spring. Once the egg hatches, they raise the falcon and bond with it. It really changed the whole feel of the ship. It was a family before, but all of a sudden there was a great bond, one that you could hear as well as see.
3. Discovering a Volcano City
When Egolda City was destroyed, I didn’t know what to do with all the survivors. I was like, “Doh! I’m so sorry! I didn’t plan for this. You guys might be hooped! My bad.” But then I was listening to MerBear, a coworker of mine, and she was telling me a this peacock rock. You’ll have to Google it. It’s absolutely stunning.
At the same time, I was watching a documentary about volcanoes. Since this world is mostly air and water, studying volcanoes was a good idea. I learned about lava tubes, and those two ideas collided in my brain! We uncovered a newly formed series of islands riddles with lava tubes, with walls covered in peacock colored algae. Inside these tubes and series of caves was an entirely self-sufficient ecosystem. Egolda City survivors were saved!

2. The Most Versatile City…EVER
As much as I loooooooove the air ships, I have to admit that the coolest cities are on the letharan. These guys are massively HUGE jellyfish that can house a city the size of Denver! The trunks become the columns of the city. The finer tendrils are like the arms that help to raise and lower the platforms of the each level of the city. The veins of the jellyfish line the walls, and the “lights” are the jellyfish’s blood which glows in the dark, radiating from blue to green to yellow to orange to red to pink to purple and back to blue.
I admit. I’m torn. I don’t know whether I should love this city more or if I should remain stubbon and continue to love the ecosystem of the air ship. The lethara are able to reside above the ocean. The smaller ones have to remain in constant contact with the water, but the older ones that are several hundred years old can actually rise into the air. They typically don’t, but that doesn’t mean they can’t.
They’re also able to completely submerge without harming the people living inside their city. The lethara has a film that drops from the medusa (hood or bell), that envelopes the entire city. Oxygen is created through the type of synthesis as the jelly pumps the ocean water through his veins. He’s cognizant, aware, and able to communicate to his citizens.
1. The People
The greatest world building element for this series has been discovering the people. Each tribe, each Great Family, each religious sect, they have their own rhythm, language, set of values. It was so very interesting to meet each of them, and I think I convey that in the book, especially in book 2. We speak each other’s language as a sign of respect. We honor each other’s ways.
This book truly has been a great challenge to write, but it has been incredibly rewarding at the same time. I hope you enjoy! And thank you again for stopping by!
SM, thank you so much for stopping by and tell us all about your new series. Here is more about SM and where to purchase her book:
Amazon – Kindle * Amazon – Paperback
Goodreads * Facebook * Twitter * Website 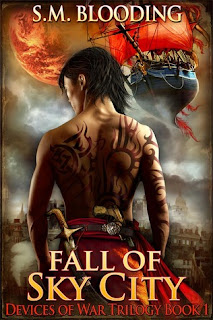 Fall of Sky City
Book 1 of the Devices of War Trilogy
April 5, 2013
In a world governed by the opposing forces of the mystical House of Tarot and the tribal Great Families, Synn is caught in the crossfire.  He witnesses the slaughter of innocent people, and the devastating murder of his father. This act awakens his Mark of power, a Mark greater than any the world has seen in a very long time.
Queen Nix thought she won a great prize when she destroyed Synn’s father, the leader of the strongest Great Families. She had no idea she’d be doubly blessed by capturing his son. However, before Synn can become her treasured weapon, before she can use him to bring the rest of the world to its knees, she must break him and bind his soul to hers.
She does her job with brutal brilliance. Synn’s mind is broken and his soul is seared to hers in an unbreakable bond.
That doesn’t stop him from wanting to be free. She may have broken his mind and claimed his soul, but he will find a way to destroy her.
Experience a world of ships that sail the clouds and cites buried beneath the ocean, and survive the fiery battle brought forth by those who control the forces of nature!