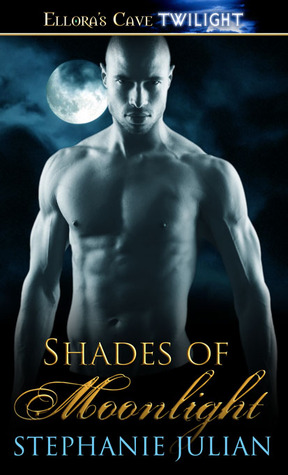 Shades of Moonlight
Author: Stephanie Julian
Release Date: May 17, 2013
Publisher: Ellora’s Cave
Lucani Lovers #6
ISBN: #978-1419946561
Genre: Paranormal Romance, Erotic
Format(s): e-book
Book Source: Publisher
Wolf shifter Race Aragon knows Mara Marrucini is meant to be his, in bed and out. And he’s not about to let anyone or anything get in his way of protecting her and her baby. She’d been the prisoner of a madman and has the emotional scars to prove it. Now that she’s free, he’s going to make damn sure she gets to live her life—with him at her side.
Mara adores Race. He’s the first man to make her feel like a woman. To make her feel protected. His touch ignites her desire but she fears for his safety. Her presence in his life puts him in the crosshairs.
But with her son’s life on the line, Mara trusts no one but Race to keep them both safe. And to care for her heart—always.
The first glimpse we’re given of the potential for a relationship between Race and Mara comes at the end of book 5, Grace in Moonlight, which I also recommend. It is a sweet little tidbit about the future mates, and sets up their interactions in Shades of Moonlight nicely. As is common for Ms. Julian’s shifters, Race’s attachment to Mara is evident from the very beginning of her time with the versipelli (“skin shifters”), even if he doesn’t understand it. One my favorite things about this story is that Race doesn’t really care why he feels so strongly for Mara, he simply throws himself into an endearing devotion to her happiness and well-being. Mara similarly trusts Race when she hardly trusts anyone else, and worries that any contact with her will put him in danger.
The ongoing build up to war with the “Malandante” (evil descendants of the Etruscans who care only for money and power) provides plenty of action throughout the series, Shades of Moonlight included. An unwilling former breeder for the Mal, Mara lives in fear for the safety of both herself and her infant son, Arin, and worries that her time with the wolves is a temporary arrangement at best. Arin, meanwhile, has a special gift of his own that throws the shifters, as well as their deities, into a further state of alarm. And if all that wasn’t enough, Race is confronted with a crisis close to home that puts his and Mara’s faith in one another to the test.
I’ve had the privilege of following the Lucani Lovers series for a long time now, and I believe it is a fine addition to the collection of any fan of shifter erotic romance. As a novella-length story, Shades of Moonlight advances the tension between the wolves and the Mal, while telling the story of an unlikely pair of misfits discovering a loving and undeniable bond with one another. Neither Race nor Mara believes they’re good enough for the other, but they can’t resist their mutual attraction, either. It isn’t logical, but it’s extremely romantic and absolutely sexy. While this story can stand alone, it is better when read within the series, as quite a few of the secondary characters already have novels of their own. While fairly simple in its execution, this story has plenty of action and sensuality to make up for it. Sometimes, the best parts of a narrative lie in not having to worry about all the details in favor of simply enjoying the story as it is, and Shades of Moonlight does that and more just fine.