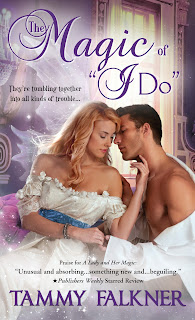 The Magic of I Do
Author: Tammy Falkner
Release Date: June 4, 2013
Publisher: Sourcebooks
Faerie #2
ISBN: #978-1402268151
Genre: Historical/ Paranormal Romance
Format(s): Paperback (320 pgs), e-book
Book Source: Publisher
Claire Thorne is a faerie on a mission. When the governing body of her world puts a prohibition on magic, she escapes to the human world and straight into the arms of Lord Phineas Tremble. When he insists on being her crime-solving partner, she does everything she can to get rid of him—until she realizes his gift for smooth talking might come in handy when tracking down a killer. Before long, Finn has his hands full keeping Claire out of trouble, because the two of them together create more sparks than her faerie dust ever could…
I thoroughly enjoyed the first book in this Historical Paranormal Romance series, A Lady and her Magic.  The second novel, The Magic of I Do, is just as fun and fluffy and was more even more engaging.  I continue to enjoy this fresh Faerie series.
As we reenter this fascinating world of Faerie, we are better introduced to Sophia’s sister, Claire.  While Sophia is stubborn, Claire in contrast will make Sophia look as if she lacks a backbone.  Claire is delightfully hardheaded, sarcastically witty and carries a bit of a chip on her shoulder.  She is having a very difficult time adjusting to the impact that Sophia’s romance and marriage to Ashley, the Duke of Robinsworth, had on the fae.  Most notably the inclusion of her estranged/banished mother, father and her siblings (most who are not considered fae).
Finn, the Duke of Robinsworth’s brother, is a rake.  He is the younger son, so he is a gentleman with no profession.  Except, he enjoys solving mysteries, interestingly enough, and it seems it is something other members of the ton know.  Finn seems to have a somewhat successful time of solving crimes, discretely which causes someone to seek his assistance in The Magic of I Do.  However, as the novel begins Finn’s life was devastated when his long time mistress leaves him for a wealthier gentleman.
At the conclusion of A Lady and her Magic, Claire is entrusted into Finn’s care.  As The Magic of I Do begins it seems that Claire and Finn are stoutly opposed to each other.  However a bit of whiskey and relaxation create the catalyst for them to find themselves attracted.  With the isolation they are experiencing at the time, they find themselves in an unplanned tryst.  After their passionate encounter, Claire is shortly whisked away with the winds to be reunited with her family due to the death of her grandfather.  While home, Claire discovers that her indiscretion with Finn may have a more serious consequence than the breaking one of the five Unpardonable Errors. But the changes occurring in her homeland and the reconciliation that her parents seek with her are too much for her to handle.  Claire finds an old paintbrush from her childhood as she attempts to hide from her parents and nurse her anger.  It seems Claire has an unusual talent for being able to step into paintings.  In trying to runaway for a moment of solace, finds her back in the temptation of Finn and without her magic faerie dust.
While trapped for the time being as an almost human with Finn, she discovers Finn’s talent for solving mysteries and attempts to help him.  Much to Finn’s chagrin, he discovers Claire trying to sneak around and spy on him.  However, as much as Finn tries to protect Claire, she finds herself in the crosshairs of an evil man who is bent on painful retribution on Finn and Ashley.  As the mystery heats up, so does the attraction between Finn and Claire – much as they remind themselves that they will not fall in love.
The Magic of I Do has many different parts.  As I write this review there is so much that happens and yet the book is not as long as you think.  It is just richly written with the right balance between passion (and some VERY steamy moments/interludes), the mystery and drama of the evil man and the resolution of the attraction between Finn and Claire.  If you haven’t tried this series yet, I urge you, if it is your cup of tea, to pick it up.  The Faerie series is a fun historical romance with a good dash of paranormal romance.

Purchase Info:
The Magic of “I Do”

One response to “Review: The Magic of "I Do" by Tammy Falkner”