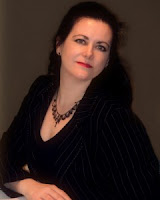 She turned to indie publishing in 2011. Her indie titles have been nominated four times for Book Of The Year and Byzantine Heartbreak was a 2012 winner.  She has been a national magazine editor and for a decade she taught romance writing at MacEwan University.
She is addicted to Irish Breakfast tea and chocolate, sometimes taken together.  In her spare time she enjoys history, Sherlock Holmes, science fiction and ignoring her treadmill. An Australian, she lives in Edmonton, Canada, with her husband, a former professional wrestler, where she moved in 1996 after meeting him on-line.
Tracy is here today to give us the top nine laws of time-travel in romances. In addition, she tells us about her latest title, Kiss Across Chains, the third story in her Kiss Across Time series.
Please help me welcome Tracy toThat’s What I’m Talking About.
The 9 Laws of Time Travel in Romances
A tongue-in-cheek and (very) generalized look at the genre of time travel romances.
1. There will be no mechanics, gears, wheels or electronics to aid the time travel.
The traveling through time will happen spontaneously, without the need of equipment, tools or machines…or Einstein’s Theory of Relativity.
2. The traveller will experience very little disorientation upon arrival in the past/future.

There will be no side-effects from the traveling, and when the traveller arrives, they can figure out very quickly where they are, and what has happened.  They accept the idea of traveling through time without question.
3. The traveller will instantly understand the local language, dialect and idiom.
Even if the locals are speaking a northern Italian early medieval version of Latin, the traveller will be able to both understand, speak and write in that language.  Ancient English dialects present no barrier at all.
4. The traveller invariably meets someone famous in the past.
Time travel authors can’t help themselves.  The historical personage not only appears in the story, but they are usually enamored with the traveller and their “advanced” thinking…

5. The traveller will find the contemporary clothes of the time they are visiting suits them perfectly.
There is never any disorientation about how to don historical garments, and the traveller never, ever finds the clothing irritating, frustrating or just plain uncomfortable.
They do, of course, look fabulous in their new garb.
6. The traveller will never fall ill of local and contemporary diseases.
There are some deadly diseases that have been all but contained or completely wiped out in our times, that a modern traveller would have no antibodies to resist if they met a nasty virus.  Even a common cold would be an ancient variant that modern travelers should succumb to.  Nevertheless, the traveller will breeze through their time in the past with nary a sniffle or spike in their temperature.
The traveller will also be able to consume and digest all local foods without ill effect or an adjustment period.  No food intolerances are permitted.
7. The traveller will never fall foul of local laws, unless it brings them into contact with the hero/heroine.
Breaking the law, falling foul of local customs and ignoring the etiquette of the times never happens.  The traveller, regardless of the degree or lack of historical education, manages to avoid all entanglements with the rules.  They instinctively acquire a working knowledge of the local laws when they arrive.
The only time they will screw up is when it helps bring them together with the hero or heroine…or drives a wedge between them.
8. People in the past will not be suspicious about the traveller.
Despite the traveller having the most odd accent the locals would have ever heard, a lack of familiarity with current events, and a general air of ignorance, locals will overcome their usually hostile or suspicious reception of strangers and accept the traveller as one of their own.
9. Whatever the traveller does in the past, it will rarely have any affect upon the future.
Einstein’s theories dictate that a visitor to the past must change the past, and even the smallest changes can ripple down through time, their effect expanding as history becomes more and more changed as the new events unfold.  But that doesn’t happen in time travel romances.  The traveller can bumble around in the past, meet and interact with key figures, even interfere with and change the course of key historical events, but because it is a time travel romance, they will find everything right with their world when they return to their own time.
—–
For every law, above, there is probably a time travel romance out there that proves it is an exception.  But time travel romances are too much fun to read and write to ever let little things like Relativity to get in the way.
I know I’m not about to abandon the genre! Kiss Across Chains
Self-Published, July 1, 2013
When dying becomes an act of love.
It is four years since Taylor and Brody almost lost Veris during the First Crusade. Now they know how to control time jumps, they have settled into a very nearly perfect, nearly human life, raising their daughter Marit.
When Brody defies Queen Tira to protect Marit, the three of them jump back three days in time to collect evidence the queen set up Brody for a drug bust in retribution.  The jump sends them back to Brody’s personal nightmare:  Fifth century Constantinople.
While Brody survives as a flogged slave, Taylor masquerades as the wife of an aristocrat and searches for Brody to release him.  They must wait for Veris to find them before jumping home and Taylor watches each brutal chariot race, wondering if this will be Brody’s last.  Brody once died in the Hippodrome and he is human this time, too….
Warning:  This story features two super hot alpha vampire heroes, multiple sex scenes, including anal sex, MM sexual play, and MMF sex.  Do not read this book if frank sexual language and sex scenes offend you.
The time-space continuum was restored to order at the end of this book.  Promise.
Books in the Kiss Across Time Series (click for review)
Book 1: Kiss Across Time
Book 2: Kiss Across Swords
Book 3: Kiss Across Chains
You can find Tracy on the web:
Website…Amazon…All Romance eBooks…Smashwords…Kobo…Facebook…Twitter