Today I welcome back author Jessica Lauryn, who is here today celebrating the release of her new title, Dangerous Proposition. Please say hello to Jessica…

Thanks for having me back, Jen!  It’s great to be here, on That’s What I’m Talking About, sharing a bit about my latest release, Dangerous Proposition.  The third installment to the Pinnacles of Power Series, Dangerous Proposition starts off in mountainous North Conway, New Hampshire, but things quickly take a turn and hero and heroine find themselves in the middle of the city that never sleeps, New York City.

Though we readers don’t often consider it, setting plays a major role in both the plot and overall feel of romance novels.  A novel’s setting can teach us something about the characters as we observe them in a place that is familiar to them.

The same can be true when we observe characters in a place that is unfamiliar.  In Dangerous Proposition, when heroine Julia Dyson heads to the big apple to rescue her missing father with his presumed abductor Colin Westwood, she finds herself in a new place, one she lived in briefly, a long time ago. Julia quickly discovers she must adjust her behavior, her street-smarts, and even her wardrobe in an effort to keep from sticking out like a sore thumb.  Her obvious resistance tells the audience a lot about who she is, and who she isn’t, and it makes for some very humorous moments along the way.

Just as setting can create a dangerous and suspenseful feel, it can create a romantic one as well. Think about some of your favorite romance novels and what time and place in which the chapters are set. If you especially enjoyed them, you may remember the sights, sounds and smells described in a favorite chapter, all elements of setting, all of which are key to creating a memorable mood and feel. “Romantic” is typically the mood we feel in romance novels, but you might be surprised to discover just how many romantic settings are described in each one.

Unlike my last novel Dangerous Proposal, Dangerous Proposition is a cutting-edge suspense, which is driven by the danger that is lurking in the shadows.  Both stories are suspenseful as well as romantic, but in one, romance spurs from misunderstandings, and in the other it comes from two characters being thrown into dangerous situations, which force them to rely on each other.  This is not to say that Colin and Julia would not have come together on their own, because of their attraction and contrasting personalities.  But, setting definitely plays a role in their story.  In this case, the danger around them essentially forces Julia and Colin to turn to one another.  In other cases, and in this case as well, setting can make the hero and heroine vulnerable, and this can play a huge role in the hero and heroine actually getting together.

No matter what story you’re reading, setting is bound to affect the overall feel.  England in 1810 might feel a lot different than New York City today, or, depending on the author and the story they’re telling, they might seem more alike than you would think.  No matter what you find on a romance novel’s cover, you won’t experience what the characters do until you read their story.  Thankfully, the greatest thing of all about romance is that there is always more of the good stuff around the corner!

You can find Jessica on the web:
Website:  http://www.jessicalauryn.com/

Charging to the foot of the bed, Julia lifted the ends of the comforter. In one swift motion, she tossed it into the air and pulled herself underneath.

Pressing her body down, she held her breath. Instantly she grew hot, and her vision became about as good as it might have been on a rainy night in the woods. She could barely breathe, and the hefty down comforter on top of her was causing her to sweat profusely.

Two sets of footsteps sounded against the floor. The door to the room was shut from the inside.

“Tonight? How in God’s name do you expect me to take care of this tonight?” a man, who sounded even more afraid than she was, asked.

A deep-toned reply ignited goose bumps along her arms. “That’s your problem. Not mine.”

Heart pounding so hard she could feel it in her throat, Julia shifted her body. She urged herself to sink as low into the mattress as possible.

“I can’t possibly—I’m not sure you understand—”

A harsh reply came like crackling thunder. “What I understand is that if you don’t rectify this situation within twenty-four hours, there’s going to be a serious change to the status of your employment. Understand that?” 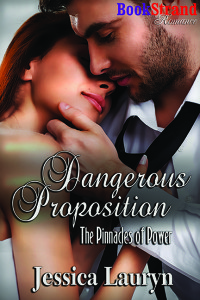 “Yeah.” The owner of the softer voice seemed to swallow. “Sure, boss.”

“Yeah, I understand you!”

“For your sake, you had better mean it,” the man, whom Julia was certain had to be Colin Westwood, growled.

The knob jangled, and the door to the room was opened.

Colin, presumably, spoke in a hushed voice. “Keep this to yourself. I want no one to know that Dyson is missing.”

Julia gasped, forgetting to put a hand over her open mouth. She’d been completely right in coming there. Colin Westwood had kidnapped her father!

She had been doing all she could to convince herself that this wasn’t happening. That Colin might be a criminal, but that he couldn’t possibly be responsible for her father’s disappearance. She was going to be sick. And then she was going straight to the cops, getting a SWAT team to raid that mansion, and dragging Colin Westwood out of there on his billion-dollar ass!

Sliding forward so she could breathe a little, Julia urged her forehead against the cool air. Colin, who seemed almost as anxious as she was, was standing in the doorframe.

She should have ducked, but a mix of fascination and fury kept her in place as he shut the door, enclosing the two of them inside the room. Watching him take off his jacket, Julia almost forgot she wasn’t invisible. He seemed deeply troubled, as though he was carrying the weight of the world on his shoulders.

Taking something from the dresser, an object she couldn’t quite make out, Colin clenched his hand into a fist. Failing to flick the light switch, he sat on the sofa and rubbed his tired-looking eyes.

Colin stared at the object in his hand. He remained that way for several moments, deep-blue irises lost in the contents of his hands. Slipping whatever it was he held into his pocket, he closed his eyes again and leaned forward, massaging his temples.

He seemed so strong and confident, even in spite of how stressed out he appeared to be. Watching him, Julia found herself imagining how his arms would feel around her body. Wondering whether his large, shapely hands had murdered her father, she stared at them. That was, until Colin turned in the direction of the bed.

Heart slamming hard against her rib cage, Julia ducked beneath the covers. Footsteps thundered toward her with a quick stride.

“Who sent you here?” As though it weighed no more than a feather, Colin tore the cover from the bed. “Damn it, woman, answer my question!”

Julia was paralyzed. She wanted to move but couldn’t. She shifted sideways, nearly sliding off the bed. But before she could get one foot on the ground, Colin dove on top of her, locking her between his legs.

Arms that felt like steel pillars held her in place. She fought to move as her wrists were pinned against the mattress.

“No one sent me,” she exclaimed, fighting with all of her might to break free of his hold. “I sent myself!”

“You sent yourself,” he repeated in a mocking tone, as though it wasn’t possible.

She narrowed her gazed. “Yes.”

“You came here on your own?” he persisted. “There’s no one you’re protecting?”

“Think so?” She smiled cleverly. “You must really have an onslaught of nemeses if you think a woman who can barely balance her checkbook is trying to shake you down.”

“Enough!” he roared. “Tell me who you are and who you’re working for. Assuming you cooperate, I might decide to handle you with kid gloves.”

“Isn’t that sweet of you? I guess this is how you get all of your enemies to back down—crush them until there’s no air left in their lungs. You’ve been warned. I’m not that easily broken.”

A sinister smile formed on Colin’s lips. With his free hand he snatched hold of her chin, smoothing his thumb across its surface. “There are easier ways to break a woman than by crushing the air from her lungs.”

Did he mean…did he intend to… Julia shook her head furiously. Just because his words were laced with sensualism and he was staring at her lips as though they were coated in cinnamon glaze, it did not mean he was going to kiss her.