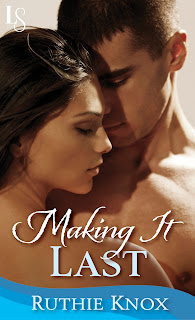 Making It Last
Author: Ruthie Knox
Release Date: July 15, 2013
Publisher: Loveswept
Camelot Series, Book #4
Genre: Contemporary Romance, Novella
Format(s): e-book
Book Source: Publisher
About the book:
A hotel bar. A sexy stranger. A night of passion. There’s a part of Amber Mazzara that wants those things, wants to have a moment—just one—when life isn’t a complicated tangle of house and husband and kids and careers. Then, after a long, exhausting “vacation” with her family, her husband surprises her with a gift: a few days on the beach . . . alone.
Only she won’t be alone for long, because a handsome man just bought her a drink. He’s cool, he’s confident, and he wants to take Amber to bed and keep her there for days. Lucky for them both, he’s her husband. He’s got only a few days in Jamaica to make her wildest desires come true, but if he can pull it off, there’s reason to believe that this fantasy can last a lifetime.
Ruthie Knox has bookended her Camelot Series with Tony and Amber Mazzara’s story.  Together the novellas represent the blissful beginning of their romance and then the reality of after “happily ever after.”  Making It Last picks up Amber and Tony’s story fourteen years after the first book ends.  We’ve seen them make guest appearances through sibling Caleb and Katie’s romances, but not enough to know more than the fact that they’re still married with children.  We are allowed to assume that their love has given them the answers to wedded bliss, perfect hair, stress-free Christmases, a new car every five years, as well as expert parenting skills that make their lives the stuff of fantasy.  So what’s there to write about?  Knox bravely takes on the romance, or lack of it, inside of real married life.
I have to admit to a serious “This is Your Life” vibe that is no doubt coloring my glowing opinion of this story.  I am an exercise instructor, stay-at-home mother of three high maintenance kids (including one with generalized anxiety disorder) who lives in a small suburb of Ohio, all things I share in common with lead character Amber.  I even read the book at the beach with my family, not at a wedding, but a fiftieth wedding anniversary reunion.  There are enough common markers, however, to give most married women with children that same feeling.  We all struggle with fatigue, body image, being “the bad guy”, the economy, in-laws, eating all our fruits and vegetables, inconvenience, and guilt.  We are also all human with finite resources and energy.  Something’s gotta give.
Making It Last begins with Amber at one of those critical moments when if something doesn’t give, she will crack under the weight of her responsibilities… even when those responsibilities are desired blessings.  I appreciate that Knox has woven her trademark humor into some serious themes and situations.  It has always been my position that humor keeps us from becoming brittle, flexible enough to carry the stress of life without breaking into a thousand pieces. Knox treats the serious stuff with its proper due, it is poignant and thought-provoking, but it’s not over-worked into being a burden to read.  Overall I found it to be a quick read, but one I wanted to return to again and again for validation and inspiration.
Especially significant to me as a reader was a personal note Knox tacked on to the end of the book.  She talks candidly about some of the book’s themes and her belief in the romance of marriage.  I’m giving this little novella my highest rating, which I rarely do, because it is difficult to write about this aspect of married life with authenticity, humor, and hope.  We all love the newness of first love or the right love and the idea of finding our soulmate, but rediscovering the one you already have without being cheesy or cliché’ is a far greater challenge.  Kudos Ms. Knox.

Reviews in the Series:
How to Misbehave (Book 1)
Along Came Trouble (Book 2)
Flirting with Disaster (Book 3)

One response to “Review: Making It Last by Ruthie Knox”