Welcome to the Urban Fantasy Summer Reading Celebration here at That’s What I’m Talking About!!
The celebration runs from July 1 through July 12, 2013, with guest posts, author and series spotlights and lots and lots of GIVEAWAYS!! In fact, each day there is a new post, there is new giveaway to enter! CLICK HERE for more information.
Today UF author ML Brennan is here to talk about choosing monsters for a UF story. In addition, Ms. Brennan is donating a signed copy of Generation V to give away, details below.
Choosing Your Monsters
Here’s one of the most fun questions you can face – you’re about to start writing an urban fantasy, a genre that’s fundamentally about monsters in the city. So – what monsters will you pick. Ones that we all know about, or something that not many people are using?
Everyone knows about vampires, right? Maybe not everything, but the basic pieces that we absorb through movies, tv, music, spooky campfire stories, and general pop culture references. Ask people about Dracula, and just about everyone can tell you what he looks like, what he eats, and how he terrorizes people. How many of those people have actually sat through a Bela Legosi movie? How many of them have sat down and plowed their way through Bram Stoker’s classic? How many of them will talk about Vlad Tepish, or the folklore origins of the vampire myth?
Some, to be sure. But these aren’t requirements. How much do we absorb just by seeing the basic vampire costume-in-a-bag hanging on the shelves every Halloween? Or by reading Bunnicula when we were little? So there’s a lot of flat recognition when it comes to vampires, because it’s just part of our daily culture. And if you happen to be a reader, well, then you have much more than just recognition – vampires fill the fantasy shelves. And in urban fantasy the vampire is a favorite building block – sometimes the author uses all the classic tropes and rules, and sometimes the author reinvents almost all parts of the vampire. The same with werewolves, ghosts, and a few other staples of fantasy. As a reader, I love it all, from the familiar to the outlandish. When I sat down to write my own urban fantasy series, I went straight for the vampires. My main character, Fortitude Scott, may be fairly different than a lot of the other vampires out there, but he’s still recognizable and familiar on a fundamental level.
But what happens when a writer wants to add in something more unusual? I wanted to have a shapeshifter character in my book, but I didn’t want her to be a werewolf. I was interested in a type of creature that I first encountered when I was teenager – the Japanese kitsune, which is a fox that can change into a woman. I’d seen a kitsune in fiction only twice – once when I read a beautiful fantasy short story that was set in medieval Japan, and then when I read Sandman: The Dream Hunters. That was my only exposure to the myth, and I’d already fallen in love enough to want to use it in my book. So what was the next step?
Research. Lots of research. 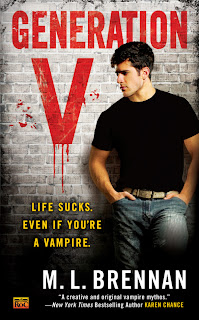 The kitsune is outside my own cultural background, and I didn’t want to be insulting in my portrayal. At first I just did a bit of research online, which gave me a bit of a base. I don’t speak Japanese, so I couldn’t look at original source documents, but I could do the next best thing – I found as many translated collections of Japanese fairy tales and ghost stories as I could, and started reading them. What was great about this was that it showed me how the kitsune was presented in the culture (similarly as if you read old collections of Irish tales about fairies and elves). I learned that how the kitsune act depends on which story you’re reading, because sometimes they act maliciously, sometimes they act nobly (usually in response to a human’s nice action first, though), but even when they are nice, they are fundamentally tricksters. I also read a great graduate thesis on the myth itself by Michael Bathgate called The Fox’s Craft in Japanese Religion and Folklore that brought in a lot of sources that I hadn’t been able to find before, plus it gave context, background, and a view of how the myth itself was representative of the culture that created it.
I was also doing a lot of reading into fox behavior, watching documentaries, and I viewed a lot of online video clips that people who owned pet foxes had made. All of this was incredibly helpful when it came to character construction, because there was this sense to the foxes that they were always having a lot of fun. There was intelligence, sneakiness, but just this overwhelming playfulness that I found extremely appealing and influential when I was creating my kitsune character Suzume. Since my vampire was on the emo side, my kitsune offered a chance to lighten him up, and also challenge him. As a writer, I also had a lot of fun bringing together two very different types of monsters – one that is very familiar in urban fantasy, and one that shows up fairly rarely.
Thank you, ML Brennan!
About Generation V
(ROC, May 7, 2013)
Fortitude Scott’s life is a mess. A degree in film theory has left him with zero marketable skills, his job revolves around pouring coffee, his roommate hasn’t paid rent in four months, and he’s also a vampire. Well, sort of. He’s still mostly human.
But when a new vampire comes into his family’s territory and young girls start going missing, Fort can’t ignore his heritage anymore. His mother and his older, stronger siblings think he’s crazy for wanting to get involved. So it’s up to Fort to take action, with the assistance of Suzume Hollis, a dangerous and sexy shape-shifter. Fort is determined to find a way to outsmart the deadly vamp, even if he isn’t quite sure how.
But without having matured into full vampirehood and with Suzume ready to split if things get too risky, Fort’s rescue mission might just kill him.…
GIVEAWAY:
I have one (1) signed copy of the first title in the Fortitude Scott series, Generation V, to give away here at That’s What I’m Talking About. Thank you to ML for sponsoring the giveaway. To enter, please complete the Rafflecopter form, below, and leave a comment at the end of today’s post telling us the most unusual paranormal creature you’ve encountered (book, TV, movies, etc.). Winner will be selected randomly from eligible entries. CONTEST IS OPEN US Mailing ONLY, and prize will be mailed by the author. Contest open from July 3, 2013 until June 10, 2013 at 12:00 AM EDT-midnight. I am not responsible for items lost in the mail. If you have problems with the Rafflecopter form, please email me at twimom227 at gmail dot com.