Today I am happy to have back romance author, Christi Snow. Christi’s latest release, The Shadow of Mudflap, is a special collaboration with Texas radio personality, MF Smith. The pair have teamed up to raise money for a special cause, and Christi is here today to tell us more. Please welcome Christi Snow to That’s What I’m Talking About.

How a writing partnership and friendship evolves via texts.

The Shadow of Mudflap is a book that has been written by Christi Snow and MF Smith for the purpose of raising money for the Lubbock, Texas Red Cross (all the proceeds from the sale of this book are being donated to this incredible organization). Christi Snow is a romantic suspense author with four previously released books and MF Smith is a radio personality. On paper, this seems to be an unlikely pairing to write a romance novel together, but they’ve done it and are both really proud of the end result.

Here’s the progression of the writing relationship as told by Christi:

MF and I are related. We’re second cousins and as family often does, we hooked up as friends on Facebook. The only thing I really knew about him was that somehow he was related to me on my mom’s side of the family and had a bizarre name because he works in radio in Lubbock, TX. I didn’t think I’d ever met him, but you know how family functions are…you meet lots of people that you never remember who knew you when you were only one. He’s my mom’s first cousin, but much closer in age to me so you would think I’d remember him, but nope, nothing.

So when he sent me a message on January 8th of this year, I was a little surprised. But you know, he follows my Facebook page, so he knew I was a romance writer… something he wanted to try his hand as this year’s charity project for his radio show. Over the next couple of months, we threw ideas around and learned the best way for us to communicate was via text.

We also began to slide into our writing roles. MF is a creative guy and he is really great for knowing intuitively about how to amp up those little details in the story that make a book work. He created the core of the characters within the book and I built the story around them, then we began to write.

Almost every component of our writing relationship and friendship happened through 160 character texts. It’s a little mind-boggling to think about.

But here’s the way our typical day would go:

6:00-9:00 … this is the time slot of the Jeff, Kelli, and Mudflap morning show on 96.3 KLLL, Lubbock. Typically, I would listen to it via my phone app or computer internet while doing the morning/school routine with the kids. We almost always would exchange a few texts during the show about what they were talking about or promo for the book or simply about what was happening at home.

Afternoons … these are my quality writing hours, so we would tend to exchange a few texts as I hit snags with the writing or story line or needed just that perfect comeback (that golf scene… it’s his!).

Evening … at some point, I would send him the updated doc of the story so he could read the newest additions or changes. That would always prompt a flurry of texts as he read and provided immediate feedback with where he felt the story was. Easily most evenings, we would text back and forth for a couple of hours. (It should be noted here that both of our spouses are saints and obviously very patient and understanding people…we love you, Shannon & Ben!)

From start to finish, we’ve been working on this project for eight months. I’m afraid to look at my cell bill to see how many texts that adds up to… it’s easily hundreds of thousands. Thank goodness for unlimited data plans. But along the way, we’ve become friends too…and that honestly, is the best thing to come out of this project. And… I did finally get to meet him and his gorgeous wife Shannon in June. 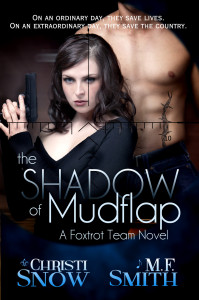 To us, first responders are heroes. But for them, risking their lives is a normal, everyday thing.

Mudflap:
Born the baby of the family, Mudflap has always had something to prove to emerge out of the shadows of his older siblings. He spent eight years as a Special Ops elite sniper and is now a firefighter. But at his heart, he’s just a normal West Texas good old boy who loves his beer, women and football, until the Department of Defense calls him up to say they need his skills again.

Shanae:
Shanae is a first responder of a different sort. She’s a trauma nurse who works on a medical evacuation helicopter team. But while she lives a life full of adrenaline every day, it’s just a cover for her real life, where she hides in the shadows and is secret agent, Shadowfox for the Lubbock Foxtrot Team (LiFT). She’s living the kind of life that most people think exists only in movies and books.

Working for two different branches of the government, Mudflap and Shanae are in a race against time and the terrorists who threaten the very heart of West Texas life, football. They’re working toward the same goal, but find themselves in a confrontation against each other and the lies they’ve each had to hide behind. Can love win out in the end or will the cost be each other and their very lives?

First responders are heroes every day, but this story tells the tale of when they become even more and find love along the way. The key is for them to stay alive so that they can complete their mission and just maybe live happily ever after.