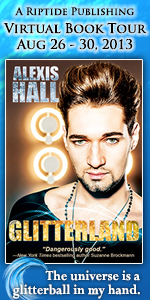 Today I am pleased to bring you debut author Alexis Hall. Alexis was born in the early 1980s and still thinks the 21st century is the future. To this day, he feels cheated that he lived through a fin de siècle but inexplicably failed to drink a single glass of absinthe, dance with a single courtesan, or stay in a single garret. He can neither cook nor sing, but he can handle a 17th century smallsword, punts from the proper end, and knows how to hotwire a car. He lives in southeast England, with no cats and no children, and fully intends to keep it that way.

Today Alexis is here to talking about his new title, Glitterland (B.’s review HERE), and introduce us to the game of Nabble. Please help me welcome Alexis to That’s What I’m Talking About…

Hello, and welcome to my first ever blog tour, celebrating Riptide Publishing’s release of my first ever novel, Glitterland. Yay! Thank you so much to That’s What I’m Talking About for hosting me. And, to you, dear reader, for stopping by. If you’d like to come with me and keep me company on my virtual wanderings, you can find a full listing of when and where I am here.

There’s also some kind of contest type thing happening. The truth is – and already I reveal the rather limited scope of my imagination – quite a lot of the incidental things in Glitterland have a little bit too much reality to them. In the sense that they’re, cough, in my house. Occasionally about my person. One of the things that absolutely isn’t about my person, and has always been solely decorative, is the peacock feather Venetian mask Ash has in his bedroom. I, too, rather admire the beauty of artificial things. If you’d like to win this slightly random souvenir, answer the three questions below (answers in the book) and drop me an email. I’ll announce the winner a handful of days after the end of the tour on the 3rd of September.

“Nabble is the opposite of Scrabble. Basically you can only play words that aren’t in the dictionary. It’s really simple. Any made-up word counts, assuming you have the letters, and somewhere to place them, and you can make a case for what the word means. But if it’s not convincing, then it gets disqualified.”

— Ash, explaining Nabble, somewhere in the middle of Glitterland

It has often been said that it is the little things that matter, and this is particularly true in a work of fiction. If one is reading a book and something happens in that book which you feel is not the sort of thing that should have been able to happen in the kind of book that you are reading, the whole illusion can be shattered, and your disbelief, willingly though it was suspended will come crashing down upon you like an unpleasantly large drinks bill. 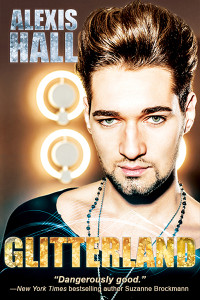 Imagine my shock, then, when just as the final touches were being put on Glitterland, just as the final copy edits were being finished, and I was starting to feel like my role in the long and arduous process of publishing a novel was coming to an end, I received an email from my editor at approximately 4am my time with a subject line that read something like: “OH MY GOD ERROR IN Glitterland.”

I freaked out. I had absolutely no idea what could possible have gone wrong. I’d been over every word in that manuscript a dozen times, and I could think of nothing that I could possibly have missed. I shook myself awake and through a drowsy haze read the rest of the email. It turned out that my publisher’s mother had read the book, and she had been shocked to notice that there were, apparently, three K tiles used in the Scrabble scene.

There’s always something, isn’t there.

And yes, I have a confession to make, gentle readers. Although Nabble is a real game – one I played at university with my friends after I got sick at their continually beating me at conventional Scrabble (as Ash observes in the book, Scrabble is at its heart a numbers game, not a words game) – the actual game of Nabble that Ash and Darian play in the book was not actually derived from a real life instance of gameplay and yes, I fear I did take a certain creative liberties with the actual rules of the came and the composition of the set in order to produce a result which sounded pleasant and provided the narrative effect I was looking for.

However, I do feel that my reputation has been somewhat maligned here (and you cast aspersions on an Englishman’s Scrabble-playing at your peril) and so I did go back to the text and make certain that the Nabble game which Ash and Darian play was indeed legal and possible using a conventional scrabble set. I admit that my editor’s mother was right, and the game does fall apart around flinkling (although I ran out of Fs rather than Ks), but I like to imagine that at this point in the game Ash and Darian had started just throwing words at one another flirtatiously, rather than actually trying to lay tiles out on the board.

So, in order that none may ever again question the plausibility and viability of the Scrabble scene, I present a full, unexpurgated, blow-by-blow replay of the Nabble game played by Darian and Ash in Glitterland, complete with pictorial evidence. The text only includes Darian’s moves, meaning that I had to add Ash’s words retrospectively. None the less, it does all work, and it works like this:

At close of play, the board looks like this: 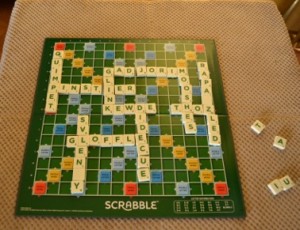 I confess that I did not take the time to work out the final score, but I rather think that Ash and Darian didn’t either.

Once the golden boy of the English literary scene, now a clinically depressed writer of pulp crime fiction, Ash Winters has given up on love, hope, happiness, and—most of all—himself. He lives his life between the cycles of his illness, haunted by the ghosts of other people’s expectations.

Then a chance encounter at a stag party throws him into the arms of Essex boy Darian Taylor, an aspiring model who lives in a world of hair gel, fake tans, and fashion shows. By his own admission, Darian isn’t the crispest lettuce in the fridge, but he cooks a mean cottage pie and makes Ash laugh, reminding him of what it’s like to step beyond the boundaries of anxiety.

You can read an excerpt and, y’know, cough, buy the book, if you want, at Riptide Publishing.