Today I welcome romance and steampunk author Lynn Viehl to That’s What I’m Talking About. Lynn is here today to share a little about her upcoming steampunk series: Disenchanted & Co. Please say hello to Lynn…

My mother has always been supportive of my writing career; she bought me my first notebook, my first typewriter (and my first bottle of correction fluid.)  She loves to read and has always been willing to look at any of my stories.  This includes the very first novella I wrote (the diary of a Russian scientist exiled after WWIII to Africa, when the dinosaurs come back!) to most of the dark, depressed You’ll Be Really, Really Sorry When I’m Gone blank poetry I wrote in high school and forgot to hide.

Mom especially loves historical romance fiction, and probably hoped in secret I’d grow up to be the next Jude Deveraux.  Unfortunately I didn’t, but she was still thrilled for me when I began my pro career writing the SF adventures of a mouthy, genetically enhanced cardio-thoracic surgeon.

She also dutifully reads every book I write, too.  Sometimes I have to explain them (the SF duology with alien killer whales as fighter pilots was a bit of a stretch for her) but she’s remained 100% enthusiastic about my work.  This even when she couldn’t always pronounce the characters’ names, figure out how a medieval-era virus mutated Templars into vampires, or exactly why alien killer whales would want to become fighter pilots.

For these reasons when I accepted an offer for Disenchanted & Co., my Victorian-era urban fantasy series, I was really excited to tell Mom. This is how our telephone conversation went:

Mom:  Sweetheart, I’m so proud.  What are the books about this time?  More vampires?

Me:  Nope.  I’m writing about a lady private detective in the Victorian era.

Mom:  You sold a historical series?  I love those!  Is it set in London?

Me: No, this one takes place in America.

Me:  The city is called Rumsen.

Mom:  That doesn’t sound familiar.  Where is it located?

Me:  In a parallel universe.

Me:  It’s like a copy of our universe where things happened differently.  America isn’t called America over there, either.  It’s called Toriana.

Me:  Because over there America lost the War of Independence, so we’re all still British.

Mom:  Um, okay.  Does it take place during the Civil War?

Me:  Actually in Toriana the empire abolishes slavery in 1833, so the Civil War never happened.

Mom:  Well, that sounds like a very nice universe.  What does this private detective do?

Me:  She makes her living investigating magical crimes and exposing the charlatans behind them as frauds.

Me:  She thinks she is, until she finds out that magic is real.

Mom:  Then how can the criminals be frauds?

Mom:  I see.  And when do the killer whales show up?

Me:  There are absolutely no killer whale fighter pilots in the story.  I promise.

Mom:  So the Lord does hear my prayers.

Despite the renaming of America, the magical mystery and all the other oddities in my parallel universe, I felt sure Mom would love the series, and she bravely agreed to read the manuscript.  The morning after she read it she called and asked when I’d have the next book finished.  She also informed me that as my mother she should be the first one to read it; the sort of emotional blackmail she’s never used to get any of my other books.

While I’ll never be Jude Deveraux in this universe or any other, I’ll take that as a very good sign.

Thank you Lynn for sharing that wonderful conversation with us all! 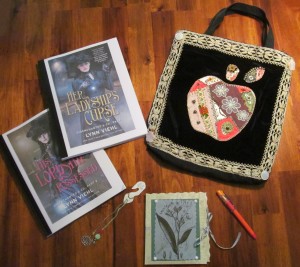 In celebration of the upcoming release of Her Ladyship’s Curse (Disenchanted & Co # 1, August 12, 2013 by Pocket Star), Lynn is hosting a special #GIVEAWAY. The giveaway includes:

To enter the giveaway, please leave a comment or question for Lynn. Or, tell us about a fun conversation you’ve had with one of your parents. Please include your email address so that I can contact the winner. Contest is open to any and all, except where prohibited by law – international mailing addresses accepted. Contest open from August 1, 2013 until August 7, 2013 at 11:00 PM EDT. One (1) winner will be selected at random from the comment entries. Prize will be emailed to winner directly by author. I am not responsible to items lost in the mail/email system. In a steampunk version of America that lost the Revolutionary War, Charmian (Kit) Kittredge makes her living investigating magic crimes and exposing the frauds behind them. While Kit tries to avoid the nobs of high society, as the proprietor of Disenchanted & Co. she follows mysteries wherever they lead.