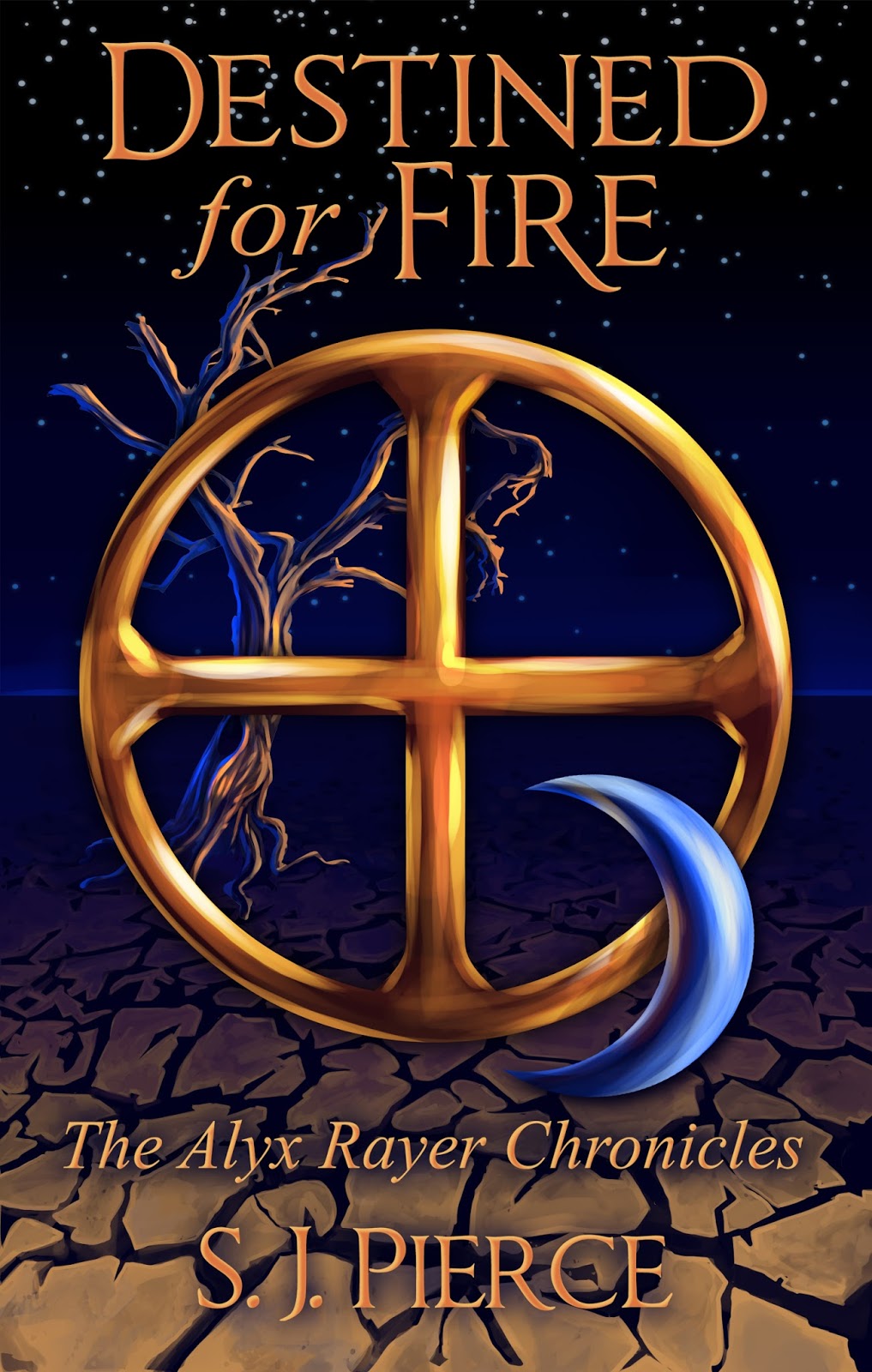 The final chapter of the Alyx Rayer Chronicles has arrived.  As this trilogy comes to a close, everything is wrapped up (with a big bow), questions are answered and a bittersweet happy ending is found.

First off, we really enjoyed this series.  The Alyx Rayer Chronicles were a fresh and fascinating new series from a debut author and Destined For Fire is the best of the three! Considering it is the end of a series, it will be difficult for us to make our review spoiler-free, and but we have endeavored to do so. Please note that if you haven’t read the series yet…there will be some minor spoilers.

Destined For Fire starts right where Tethered by Fate left off: angry, saddened and reaching desperately for some sign of hope.  Alyx, much to her own chagrin, has taken Micah back to Earth in hopes of revenge.  What starts off as a simple mission for revenge suddenly morphs into something more – hope.  We are introduced to Rae (whom we instantly loved), a surviving thirteen-year-old who is trying to protect the younger children.  Her spunky spirit and gritty faithful determination were exactly what our two unlikely heroes needed. As we get to know Rae, we watch as Micah’s world is turned up-side-down.

Alyx is surprised to find help as she works to find Serpious and at least give him a piece of her mind, if not end him.  It is not surprising that Sam comes to Alyx’s aid but it also contributes to his own very tragic and sad story.  We LOVED Sam, his gentle spirit, determined protective streak, and utterly loyal heart were hard not to fall for (lest we forget he is hunky and gorgeous).  As the four of them (Alyx, Sam, Micah, and Rae) encounter their own trials and tribulations on their quest to find Serpious, they continue to strive and support one another in their goal for vengeance: an example of a beautiful spirit contrasting with their mission of blood.

Although we had a few issues (which we will mention in a moment) they did not detract from our overall enjoyment of the novel (and series).  More so, they gave Gikany and Una topics to discuss once we had both finished reading.  The first issue was the clichéd way a competing group (searching for Serpious) ultimately clash with our heroes.  We thought the leader, Lachlan, being as charismatic as he is would have been more likely to show his true evilness by waiting until the last minute to betray them.  To us, the blackest evil would be a stunning betrayal accomplished through subterfuge from the beginning only to reveal their hand at the end – when they think they have won.  However, that being said…the way this sinister group returns later was just as enriching to the storyline.

One issue that is more an over-arching issue on the series is the mythology. It gave us the feel that the world building was a bit green — young and still developing.  Considering that our narrator (Alyx) is a bit lost to begin with, it is understandable since we see the world through her eyes.  It also contributes to the belief that the ways of the Creator are beyond our understanding.  That being said, the Creator in this world seems bound by rules we do not know or understand.  There are a couple of instances that puzzled us…why, being that this is the Creator, he cannot just snap his fingers and have his will satisfied.  Why would it take sacrifice to achieve something he desires?  Despite this (and much discussion between Gikany and Una that we’ll spare you) it may be because the Creator has his own mysterious ways and we are just not able to comprehend them.

The final note is not an issue we have but rather a plea to Ms. Pierce.  The character of Sam received a pretty raw deal in this trilogy.  Our heart aches for him.  Although we are given a glimmer of hope for his ever after, we would love to see the author revisit another one of the worlds that is referenced. Specifically one where we might see Sam and in either a standalone story or serial one as he finds his HEA that is so surely deserved.  We do know that Ms. Pierce will be releasing a young adult spin-off series from this one.  Gikany and Una look forward to when it debuts.

If you would like to enjoy a different series, one about choices, beliefs and sacrifice, pick up the Alyx Rayer Chronicles.  We truly like the journey and think you may as well.

“Fire… this was her destiny. She would leave this world in fire and hopefully right all of these terrible wrongs.”

In this final installment of the Alyx Rayer Chronicles, follow Alyx and Micah as they travel back to the hell that once was Earth in search of Serpious and his legion, as well as the only thing they have left to care about now – revenge.

May not be suitable for YA.

Reviews in the Series:
Marked for Vengeance
Tethered by Fate