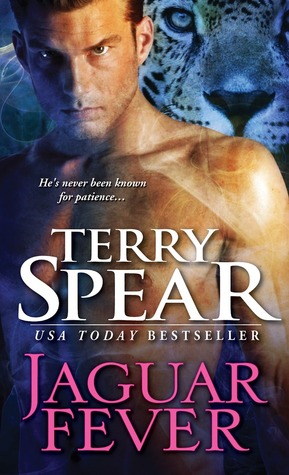 Although she loves her life as a “wild” jaguar, alternating her time between the garden nursery she owns with her brother and traveling to the jungle where they can run as big cats, Maya Anderson is lonely. Taking advantage of her brother’s rare absence, she’s determined to meet others of their kind at a shifter-friendly nightclub. But, she never planned on getting in the middle of a deadly animal smuggling operation, or running into the one male she’s ever really wanted.

Wade Patterson is on the trail of a group of illegal animal hunters with his brother when he meets the pretty jaguar shifter who piqued his interest while on a mission in the Amazon months before. Immediately drawn to the independent beauty, he finds himself in entirely new territory when she becomes a target and he realizes that he has more to lose than ever before.

I’ve always liked Ms. Spear’s wolf shifters, and was very happy to see that her jaguars were just as enjoyable. Maya is strong, both physically as well as in temperament. Far from impetuous, however, she is cautious and deliberate in her actions, yet she doesn’t hesitate to do whatever is needed, even if she’s on her own. That she isn’t content to sit back and let the men around her call all the shots is a bonus, especially since her determination to do whatever might be necessary to save innocent lives causes said males a substantial amount of irritation.

Wade, however, is almost too perfect at times: he’s gorgeous, committed to his pursuit of justice, protective, and accepting of Maya’s initial claim that she’s not ready to settle down with a mate just yet. He’s clever and skilled in battle, and he hits all Maya’s buttons from the very beginning. What keeps Wade from becoming a cliché Alpha male is his considerable awkwardness and sense of humor, his resolve to do what’s right, and the easy rapport and affection he has with those he cares about. In truth, Wade is kind of a dork, and I liked that about him tremendously.

Jaguar Fever isn’t just a romance; it has a lot of action among its merits, as well. Wade is a soldier and takes his job very seriously, and Maya is likewise passionate about putting an end to the wrongdoings they uncover during the course of the novel. Ms. Spear has a talent for writing strong female protagonists, and gives most of the power in the various interactions to the women in the story. While not entirely a “nail-biter,” Jaguar Fever does have some wicked villains, and since hating the bad guys is sometimes part of the fun, I found doing so with these to be a rewarding experience.

Jaguar Fever was a good story with nearly equal parts action and romance, and it can be successfully read as a standalone (although, these jaguars are fun, and I’m still recommending it be read as part of the series). Maya and Wade are great characters, and, although the momentum of their relationship is a little quick at first, they make a wonderful match for one another as the story progresses. Ms. Spear’s jaguars are highly sensual creatures, and Maya and Wade are a perfect example of that nature, learning one another sometimes literally by touch. Quite a few of the secondary characters, most notably Wade’s brother, David, also shine throughout the novel, and I believe there’s no shortage of possibilities for them yet to come. Overall, this was a nice addition to a series that was already off to a strong start, and it’s one I’d like to continue along with for its duration.

She’s being pursued by everyone, in more ways than one.
Even in an exotic world of humans, jaguars, and tantalizing creatures who shift between the two, Maya Anderson stands out from the crowd. Interest from human suitors is bad enough, but when male shifters give chase, the real trouble starts.

Who’s the hunter and who’s the prey?
Investigating the black marketing trade of exotic animals keeps Wade Patterson more than busy. When he and Maya both get entangled in a steamy jungle mission, it becomes impossible to tell who is being hunted or who the hunters are. Wade is desperate to survive this deadly game of cat and mouse. But it’s Maya’s piercing eyes that keep him awake at night.