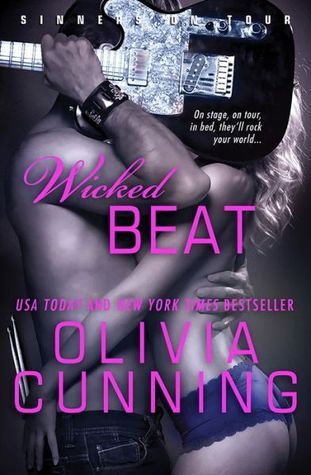 Rebekah Bates has worked hard to become a top-notch soundboard engineer, and when she gets the chance to fill in on the crew of one of the biggest rock bands on earth, she won’t let anything get in her way. Not only is Sinners her favorite band, but, for as long as they are on the road, she’ll be close to the object of her desires, and ultimate bad boy, rhythm guitarist, Trey Mills. It’s a fine plan, until the tall, quirky drummer of the band, Eric Sticks, is suddenly the one filling her thoughts—among other things.

Joining Sinners years ago was the best thing to ever happen to Eric. Though not originally a drummer, he’s happy behind his kit, and the songs he weaves together have earned the band fame as well as a huge and devoted fan-base. Life as a rockstar is the best—at least, it was until his perfect woman joins the band on the soundboard, and openly lusts after one of his bandmates. Although he learned a long time ago to take whatever he could get where his body and heart were concerned, something about the petite engineer makes him want more. And he’ll do anything to have her.

Firstly, I think Rebekah is one of the strongest women yet in the Sinners on Tour universe, and is absolutely one of my favorites. She launches herself fully into every situation in her determination to truly live her life on her own terms, even if she has to reassess that decision later on. For all that impulsiveness, however, Rebekah’s actions sometimes feel like a performance in that she’s trying to convince herself, as much as the men around her, of her own desirability. Having nearly died once, she wants to live. Simple enough. I also appreciated that Ms. Cunning allowed Rebekah’s talents shine early, rather than make her scramble through series of disasters that would have called her capabilities into question before finally proving herself. The battleground that is her fight for respect in a male-dominated profession is certainly present, but not as all consuming as her efforts to find love. Not that that isn’t an extremely important issue, but Rebekah has the skills to do the job. She knows it and owns it. Her heart, however, is a different issue.

Eric is even more likable, I was happy to discover, with a self-depreciation that suits him well. He’s a loner, in practice, but has the potential and desire for so much more. He’s funny, and goofy, and has no filter whatsoever between his brain and his mouth, yet his intentions are so earnest and free of malice that it’s endearing, rather than horrifying. He’s happiest behind the drums, staying in the shadows of the other members of the band, and has no real inkling of his own worth. It’s a testament to Ms. Cunning’s abilities as a writer that he carries these traits so vibrantly, when they could have easily reduced him to a caricature of the “odd-man-out” syndrome. Eric is a hero in every sense of the word, but has just enough tarnish on the armor to make it very clear he’s no saint. I already liked him from his scenes in the other books in the series, but fell in love with him here.

Great characters aside, Sinners on Tour is a series about life on the road with a famous rock band, and sex is a dominating factor. And there’s lots of it in Wicked Beat. Ms. Cunning is both thorough and inventive in her descriptions, and does an excellent job of keeping the encounters from becoming stale as the story progresses. No small feat, since there are a lot of sex scenes in these books. I mean…lots. In varying locations and configurations, sometimes with accessories and sometimes without, and there’s even a quick, but unexpected, m/m scene later in the story that I read enthusiastically. Twice. Sex isn’t a commodity in Wicked Beat, but rather a form of communication, the limitations of which Rebekah discovers the first time Eric allows her into his home.

Sinners on Tour is a deliciously sexy collection of stories, and the latest addition, Wicked Beat, is no exception. As is true of the other stories, it can be read separately, but will be much more enjoyable if read as part of the series. Each of the band members has a tale to tell, and they’re all connected, which adds to the intimacy of the series as a whole. Despite the somewhat heavier theme running through the novel, it is an optimistic tale of dreamers and lust, life on the road, and, of course, love. Rebekah and Eric are extremely well matched, and I enjoyed watching their dance towards one another very much. While I’ve grown to love the series overall, Wicked Beat has definitely taken its place as one of my favorites.

From the moment he lays eyes on Sinners’ new front of house soundboard operator, drummer Eric Sticks knows he has to make Rebekah his. Unfortunately, she’s too busy trying to seduce guitarist Trey Mills to pay him much attention. Rebekah never planned to fall for the tall, goofy drummer with the weird sense of humor and a heart the size of the galaxy, but Eric makes her laugh and his constant attention makes her feel sexy and irresistible–exactly what she needs after the things her last lover said to her. A woman who gives as much as she takes, Rebekah makes Eric feel like a total stud–exactly what he needs after surviving a decade of watching the incredibly talented members of Sinners from the wings.