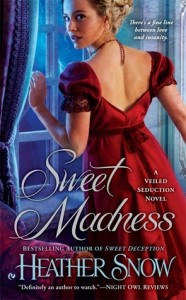 …”Have you considered that your affliction could stem from traumas you experienced during battle?”

He regarded her.  “I’d be a fool not to have,” he answered.  He still had the dreams of death and battle and even the waking nightmares occasionally.  “In fact, I have often wondered if that is where this lunacy got its start.”

The dreams had brought on terror and confusion, but he’d take that every day of the year over the bouts of madness that had marked his past months.  “But even were that the case, it has gone far beyond anything I suffered from the wars.  And therefore beyond both your experience and your best intentions, I’m afraid.”

“I will admit I’ve never seen a situation quite like yours,” she said tactfully.  “Bu don’t underestimate me.  I dare say my methods will be better than what you’ve endured thus far.  Mr. Allen told me of the purges, the cold baths, the leeching.”  An involuntary shiver shook her shoulders.  “He said you even asked to be blistered?”

This time the shiver was his.  He’d never forget the agony of hot plasters being placed on his skin, raising blisters that were then lanced and drained.  “That’s barbaric, Gabriel.  Why would you let them do such a thing?”

“Why do you think?” he shot back in clipped tones.  This time it was he backing away from her, ashamed.  Did she know everything of his time in this madhouse?  “Because some bloody doctor told me it could heal me.  Some blather about the overstimulation of my nerves and restoring my natural balance, and hence my sanity.”

The worst part of it was that he’d thought it had worked.  For a few hopeful weeks, he’d been episode free and begun to dream about returning home and picking up his life.  But then he’d had another episode, one worse that any before it.  “I’d have done anything to be the man I once was,” he finished in a low voice.

Penelope surprised him by not allowing his retreat.  She followed, placing herself so close he could detect her subtle scent.  She tilted her head up slightly.  She wasn’t a short woman, but neither was she tall.  Rather, she was the perfect height to capture his gaze and his attention.

“Then don’t send me away, she said.  “I may have started down this path unintentionally, but I have helped many men in the last two years – men who suffered terribly.  I can help you, too.”

He turned his head in slow denial.  The very idea of laying himself bare to Penelope horrified him.  However unbarbaric she might think of her methods were, they would be sheer torture to him, just by virtue of who administered them.  Even if he thought she could help, he couldn’t bear it.  “No.”

Her lips firmed into a stubborn line.  “I gave my word.”

“I don’t hold you to any promises you made my family.”

“I never asked for your help,” he stated gruffly.

“Oh, yes, you did.”  A pink flush tinted her cheeks.  As close as they were, he could see the rapid beat of her pulse in her throat.  “Yesterday.  When you — when we were on the floor, just there.”  She tipped her head to the left.