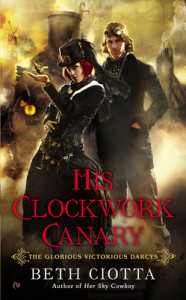 A newsboy appeared hawking the morning edition of the London Informer.  Unable to resist, Simon purchased a copy.  Just as he unfolded the wretched tabloid, someone snatched it out of his hands.

“You don’t want to read this,” the kid said.

“Oh, but now I must.”  Simon retrieved the newspaper and focused on the front page.

The Informer’s star reporter has taken a sabbatical in order to chronicle the exploits of the Honorable Simon Darcy, London’s most controversial civil engineer (and relation of the infamous TIME VOYAGER), as he joins the Race for Royal Rejuvenation — now known as the Triple R Tourney!  The Clockwork Canary will record a firsthand account of Mr. Darcy’s adventures, to be published in serial form upon completion of the expedition.  Prepare to be dazzled by tales of risqué romance, high drama, and nail-biting intrigue!  Will Mr. Darcy dazzle and deliver like his notorious cousin  Or, like his unfortunate father, will his dreams go up in smoke?

Simon’s temper sparked and snapped like the malfunctioning turbine on the Flying Cloud.  Strangling the Canary would only land him in prison — or worse.  In addition, the blasted pressman possessed knowledge that Simon very much needed.  Tempering the urge to kill, he glanced over the top of the paper at the red-faced sensationalist.  “If I were a violent man–”

The kid’s cheeks burned even brighter.  “I’ve done my research.  You have no prior record or history of physical violence.”

“There’s always a first time.”  Simon folded the paper and shoved it in under his arm.  He leaned in, glowering down at the dark-haired, dark-eyed, ruddy-skinned bohemian.  An intimidating move meant to allow him closer, intimate proximity.  His body responded in a familiar, intimate way.  Bleeding hell.  Mina?

“I did not write it,” the kid gritted out.  “That particular article, that is.  My editor assigned someone to take my place.  Whilst I’m away.  With you.”

Simon merely watched as the Canary fidgeted beneath her coat.  Her coat.  Oh, yes.  He would bet his comfortable own house this pressman was indeed a bird.  And quite possibly his former betrothed.  Question was, what was she playing at?

“Did you purchase our tickets?” Willie asked as a whistle blew and a conductor invited passengers on board.

Looking anxious to distance herself from Simon, she tightened he grip on her valise and tugged down the brim of her floppy cap.  “What car–”