Andrea Speed joins me today at That’s What I’m Talking About to tell us about her new title, Strange Angels. She is also giving away a digital copy of Prey (Infected #1) to one lucky commenter. Keep reading for details, and please help me welcome Andrea…

The next in my series of interviews with characters in my latest book, Strange Angels, I talk with Balor, a Celtic death god. He’s … unusual. I can’t stress that enough.

Andrea: Thanks for talking with me.

Balor: I have no idea why you want to talk to me. I don’t really play much of a part in this story.

Andrea: Wow. You’re so wrong. You play a big part in it.

Andrea: That’s debatable. So what would you like to tell readers about yourself?

Andrea: What does that mean?

Balor: I don’t really have any truck with the dead anymore. There’s lots of other death gods, so no one really noticed when I hung it up.

Andrea: You can just stop being a death god?

Balor: Sure. I mean, the powers don’t go away, but you can set aside the trappings of god-dom and do other things. I did.

Andrea: Yes, your realm is .. interesting. Without spoiling anything, why do you exist in that realm?

Andrea: Umm, that really doesn’t explain it at all.

Balor: How familiar with my story are you?

Balor: Well, Human myths have it that my own grandson killed me and plucked out my death eye, but that isn’t true. I kinda wish it were true, ’cause the reality is horrible.

Balor: (sighs) Please keep in mind I was kind of a dick back then. What happened is, I opened my eye on him.

Balor: It’s the only eye I have.

Andrea: And he died?

Balor: He was disintigrated, as are most things when I open the eye. It’s called a death eye for lack of a better term, but it can shred everything, breaking it down to constituate atoms. I can rip holes in the space-time continuum if I want. It’s why I rarely open my eye.

Andrea: But how do you see?

Balor: It’s only got the one purpose. I have internal eyes.

Andrea: How does that work?

Andrea: Then why can’t you turn off your death eye?

Andrea: How does it work?

Balor: (sighs) Look lady, I’d have to pull you into a pocket universe, where time moves much more slowly, to explain it all to you. But I have paperwork to do and really don’t have the time.

Balor: Well, I don’t know about the rest of them, but I sure do.

Want to read more about Balor and his equally weird fellow gods? Check out Strange Angels, out September 16th. But don’t say I didn’t warn you. 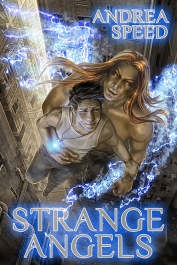 Death is the family business, and Brendan Connolly is about to come into his legacy. Nobody warned Bren that Dad was a death god, or that someday he’d inherit his powers. So far, falling in love with the angel sent to protect him has been the only good thing to come out of this whole mess.

Bren’s guardian angel, Lorygdarain, knows the aura of a ticking supernatural time bomb when he sees one. Add to that the angel’s first taste of the human emotion called love, and protecting Bren from the god who killed his father could be Dar’s hardest job in an eon.

Snakes, amnesia, and a mysterious god named Bob might not be much of a rescue plan, but one guardian angel can only do so much. With a veritable pantheon on his heels, and the universe hanging in the balance, Bren must learn to lock and load the most dangerous weapon of all: himself.

Ms. Speed is offering a digital copy of her book Prey (Infected #1). To enter, please leave a comment for Ms. Speed and include your email address so that she may contact the winner.