Today I’m helping celebrate the release of Visions of Fire and Ice by Teresa D’Amario. This is the first title in her new paranormal romance series based on Egyptian Mythology. 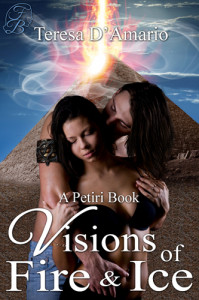 Trapped on a planet not their own, the Petiri spend their lives hiding the natural gifts that set them apart from the world. They live long and unfulfilled lives, unable to find their soul mates on this backward planet known as Earth. That is until the night Ramose comes face to face with Tamara, a woman whose gifts rival his own. Determined to find why this human is in possession of an ancient magical Petiri relic, he arranges a meeting.

But Tamara, embittered from past events, is wary despite lifelong dreams of Ramose and a sure knowledge he is her soul mate. Before long the couple find themselves ensnared in a battle that has raged for millennia in Egypt’s desert. Set, Egyptian God of Chaos, is determined to take his just due: the throne of Osiris.

The only way to stop him is for Ramose to put his trust in Tamara, but, first, he must gain the same from her. The ensuing sensual relationship is filled with romance, lust and love. Their relationship is tested by an unnatural evil. Will her powers over fire, combined with his ice be enough to win the day? Or will the ancient gods and goddesses of Egypt destroy more than just their love?

In celebration of Ms. D’Amario’s newest release, That’s What I’m Talking About, along with the author, will be hosting a fun giveaway. Come back next Friday, September 27th, for more details!

One response to “Book Release Spotlight: Visions of Fire and Ice by Teresa D’Amario”