Today we are spotlighting the re-release of Geekus Interruptus by Mickey J. Corrigan. 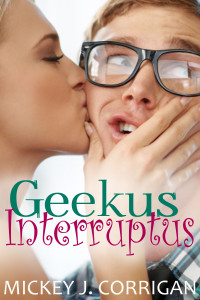 But Marcy loves her husband, even if Jess Margate is from the planet of the nerds. She decides to play it smart for a change. Using spyware and creative strategy, she plots to find out why her geek has been interruptus. Armed with the latest in miniature technology, Marcy plans to uncover the cause for the downtime in their love life.

A modern romantic comedy of hot errors and hotter apologies, Geekus Interruptus is a story for our time. Because these days, nerds rule. And geeks have guilty pleasures too–some quite different than our own.

Find the author on the web:

At dinner Sunday night, Jess ate quietly, his eyes downcast. He pushed his boiled red potatoes around with a fork and avoided the broccoli casserole entirely. A thick slice of roast beef (rare, the way he liked it) sat untouched, bleeding into a pool in the center of his dinner plate.

She was hesitant to chatter about her day like she usually did, for fear of blurting out her recent spy activities or demanding he tell her what the fuck he was up to. Her nerves were on the edge of something. A dangerous something that could easily blow her cover. So she tried to make small talk and found herself unable to ask her husband a single leading question about his recent work. Like, How’s the X account? Or, Did you complete the Y software design? Over the last year or so, she hadn’t taken much interest in the details of Jess’s work life. And it showed.

He stabbed an innocent chunk of potato and brought it to his mouth before setting it back on the plate where he seemed to think it belonged.

“What crest? What’re you talking about?”

He looked at her, or maybe through her.

“What I mean, Marce,” he said slowly, as if talking to a dimwitted child, “is when you hit a certain age, you no longer come up with worthwhile innovations. Your brain is incapable of making the connections required for new leaps in design. In the field of mathematics, this brick wall to creativity can appear by the time you turn thirty. I’m afraid software engineering’s a young man’s game.”

She laughed but stopped abruptly when she realized he was serious. Cresting at thirty? It seemed a ridiculous concern for a brilliant man like Jess.

“I’m not kidding, Marce. And there’s plenty of scientific research on brain development to back up what I’m saying. I’ve got maybe ten years left, then I’ll be fully over the hill. While the youngsters fresh off their post-docs take over the world.”

He popped a potato chunk into his mouth, then thought better of it and spit into his linen napkin. Geeks had the worst table manners. She’d had to learn to live with it.

Marcy reached for his hand and covered it with her own.

“I’m sure you have plenty of genius left in you, darling,” she said.

In fact, she had no doubt. The idea he was washed up at thirty-one was nonsense. Was it this sort of crazy thinking that had propelled him into the arms of another woman? Was he suffering from decaying self-esteem, bizarre geek phobias, some sort of engineer’s block?

An idea formed in her mind. Wouldn’t hot sex with his devoted wife help boost his deflation? Couldn’t the old in-and-out be a kind of cure for his work-related depression?

She stood up and posed, pushing her breasts and ass into pre-coital position, moving her hips back and forth, swaying gently just beyond his nose. Jess continued to stare blankly at his bloody beef.

Marcy sucked in her breath. She hated being turned down. It was totally humiliating. But Jess seemed to be in need of a good fucking. Maybe she could win back his attention using the old tricks. She swallowed her pride and prepared for action.