It’s been a long time since I’ve read a book that completely captivated my attention like Forged in Dreams and Magick.  As the first title of Ms. Kat Bastion’s self-published Highland Legends series, readers are certainly in for a pleasant surprise.

I went back and looked at my Goodreads updates while I was reading this title.  I don’t think I’ve ever been so up and down and all around emotionally for a dudes-in-kilts title as I was while reading this one.  Which is a good thing.  Ms. Bastion’s writing is tight, and able to transport the reader to 13th century Scotland or to the ancient Pict villages with her vivid descriptions and her attention to details needed to bring the reader into the time periods in question.

In reflecting on Forged in Dreams and Magick, there’s nothing that irritated me.  Which. Is. Amazing.  Most of the time, even when I’m reading a fabulous book, something just doesn’t sit right with me.  You know, that one thing that makes you go, “Hrmmm…”  Additionally, I spent days revising this review just so I could write it spoiler-free.  VERRA difficult.  Here’s what I came up with.

Characterization and setting were the primary focus, for me, while reading Forged in Dreams and Magick.  Without ever having been to Scotland, I felt as though I were riding through the woods on a trusty steed, wind in my face, the smell of the sea filtering through my lungs.  I could nearly smell the aromas in both time periods.  The tactile experiences were nothing short of amazing.  I could practically feel the fabrics and furs beneath my fingers.  I relished the experiences of Isabel, which can be two-fold.  The reading experience is EPIC.  Sometimes, however, vivid experiences such as this, throw me into the dreaded book hangover.  Not this time.  Ms. Bastion expertly resolved everything to my satisfaction, for this storyline.  Gently bringing her reader out of author-induced story hypnosis, and sending us on our merry way, with a smile on our faces.  A spoiler-free passage needs to make its way into my review; however (and seriously, I marked MANY passages I loved…this was the only one that was spoiler-free).  The illustration of emotion Ms. Bastion has masterfully crafted should convince any reader of the genre that this is a must read:

Iain masterfully orchestrated every note of my unfolding sonata, building the tension toward a crescendo.

Velloc, one of Isobel’s soulmates, was unexpectedly tender, caring, and open to new experiences.  As a Pict Chieftain, and based on my own knowledge of the time period, I wouldn’t have expected such behavior.  While I spent nearly the entire novel solely Team Iain, Velloc did eventually win me over.  A little bit.

The nuances between Velloc and Iain were distinct.  They were powerful.  Both men were passionate and all-in, all the time.  There was no half-way for either.  At first.

Iain was Isobel’s other soulmate.  First, I can’t imagine having two soulmates.  It’s exhausting having just one.  Second, Iain was one of the most flexible characters I’ve seen in a novel in a long time.  In the 13th century, Iain was open to Isobel’s need for several things, contrary to typical behavior of men during that time.  Because he loved her so much.  His drive to make her happy was really the only thing that mattered.  In turn, I totally fell for him.  Because of Iain, I think I need to create a Book Boyfriends list for 2013.  The way I fell for him wasn’t all Twilight-ish; it was a slow, gradual unraveling that frayed me from the inside out.  Ms. Bastion needs to be aware that if she ever kills off Iain, she better warn me to read that title when I have plenty of tissues and a week off work.

Isobel is our sassy heroine.  Tossed around in time, Isobel’s knowledge of the time periods helped her assimilate much faster than the average Jane.  It also allowed her to look at customs and practices with an analytical eye that made it easy for the reader to understand.  I loved Isobel’s voice.  I loved her determined nature.  What I loved the most about Isobel is that I saw a little bit of myself in her character.  When I can connect with a character like that, it makes my reading experience that much better.  I think the cool thing about the way Isobel is written is that most anyone can see a little of themselves in her.

Like I mentioned, writing a spoiler-free review was so difficult!  I have so many favorite parts – happy parts, sad parts, mad parts – that I could have gone on for days.  I think I need a support group to discuss.  Suffice it to say, I highly recommend Kat Bastion’s newest series, Highland Legends, to any reader that adores a good, solid love story with concrete plots.  Special interests in men in kilts optional.  Forged in Dreams and Magick definitely makes my BEST OF list for 2013, and I look forward to many more opportunities to read Ms. Bastion’s work. 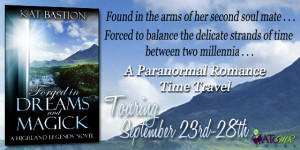 Isobel MacInnes wakes up in present-day California, lunches in medieval Scotland, and by ten days’ end, falls in love with a man and his country, only to lose them in a heart-wrenching twist of fate . . .

Found in the arms of her second soul mate . . .

Forced to balance the delicate strands of time between two millennia . . .

Shocked by revelations rewriting the very foundations of history . . . of everything.

Isobel, a rising-star archaeology student, is dropped into two ancient worlds without warning . . . or her permission. Her fiery spirit resists the dependency thrust upon her. Amid frustration at her lack of control, she helplessly falls in love. Twice.

She struggles to adjust to the unimaginable demands of two leaders of men—a laird in the thirteenth-century Highlands and a Pict chieftain in a more ancient Scotland. Isobel transforms from an academic, hell-bent on obtaining archaeological recognition, to a woman striving to care for those she loves, and ultimately . . . into a fearless warrior risking everything to protect them.

Want to know more about Forged in Dreams and Magick? Click here to see where else the blog tour stops!

5 responses to “Review: Forged in Dreams and Magick by Kat Bastion”