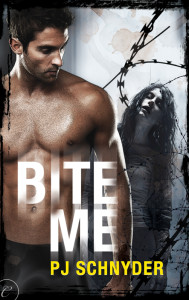 “I want a blood sample.”

Seth narrowed his eyes. “Why?”

“Whatever it is you’re on, I figure it’d be useful to help the newer wolves with their rage control.”  Danny paused.  “Or I could sell it as a recreation drug.  I’d make a fortune.”

Seth tossed a towel at the pack medic and stood up from the weight bench where he’d been pressing more weight than any three human body builders could have handled.  “Get on, then.”

“Seriously, man, I left you out on a solo patrol cause you had to burn off some temper, and you come back all sunshine and posies.”  Danny handed Seth a water bottle.  “One of the pups freaked out , thought he might have seen an actual smile on your face.  Maybe.”

“Only fresh from killing zombies, covered in gore and high on adrenaline.  You’ve got a reputation for being a bit mad, you know.  Seeing you smile like a normal man, in the middle of the day?  Nah.  That’s enough to creep me out too.”

Seth growled.  Danny had known him for years, well enough to know there’d been a time when he’d smiled like a normal.

Danny held up his hands.  “All right, fair enough.  But I am curious.  What happened last night to trigger such a big change?  I won’t say how long it’s been, but it’s good to see.”

Mollified, Seth turned his attention to removing the heavy weight plates from the bar and returning them to the rack.  “There might have been some zombie killing involved.”

“Not the main reason, I gather.”  Danny was a smart man and didn’t push the joke further.

“Did you save her from the zombies?”

Wouldn’t that have been classic?

If she’d have ben an ordinary damsel in distress, he’d not have stuck around after saving her.  Nah.  And if he’d have called Maisie a damsel in anything, she’d have stabbed him with one of her crutches.  Or used it to crack him over the head.

Seth chuckled.  “Well, now, she was in the process of saving someone else from zombies, but I decided to step in when those idjits’ screaming attracted more.”

“Sounds like an interesting woman.”  There was a cautious note in Danny’s voice.

Rightly so.  Seth hadn’t mentioned details and the last time a lady had entered his life, her betrayal had almost been the death of him.  It’s be ironic the way he and Danny’d been talking about Sarah only a short time before Seth came upon Maisie, but a day rarely went by when Seth wasn’t reminded of Sarah.  He made it a point to remind himself about her, so he’d not allow anyone close to make the mistake of relying on magic again.

Maisie relied only on herself…and her guns.  Clean, practical.

“She’s a plucky girl, not like any I’ve met before.”

He’d said it as much to reassure Danny that Maisie wouldn’t be a repeat in history as to give him a hint of her character.

Danny never let caution stop his curiosity.  The medic might be spending too much time with the leopard pride.  The big cat shape-shifters had moved into London proper in the last year, after hiding out in the countryside for a couple decades scaring the bejeezus out of farmers around Devon and Cornwall.  While the werewolves were glad to have their help in controlling the growing zombie infestation, only Danny and the leopard pride healer could visit either group without triggering territorial aggression so far.

“And how’s she different?”

2 responses to “Sunday Snippet – Bite Me”