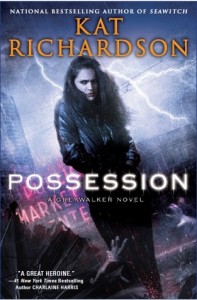 “Any luck?” I asked, hearing Wrothen snort in derision behind me.

“Depends on how you define that.  Lots of ghosts around, but they aren’t talking to me.”  Then he drew and excited breath and perked up, staring over my shoulder toward the bed.  “Oh! She’s up!”

“No, she’s not,” the nurse snapped, looking at the monitors and making rapid notes on an electronic clipboard.  “Her blood pressure is up, and she’s upright, but she’s not awake.”

“I didn’t say she was awake,” Stymak objected.

Ignoring the argument, Goss rushed toward the bed and I followed her.

The patient – sickeningly thin, her dark hair hanging limp around her head — was sitting rigidly upright in the bed and staring straight ahead as her left hand groped across the bedspread for something.

Goss snatched a flat paintbrush from a jar on the nearby table and put it next to her sister’s seeking hand.  Julianne grabbed it, but nothing else in her body or face seemed to react. I could see the silvery mist of the Grey coiling around her in a thick, moving mass.  A clutter of shadows pushed and boiled near the bed, then began to draw aside as the patient started painting on the bedspread.

Goss pushed the table with the easel over to the bed and into place in front of Julianne, who transferred the brush to the canvas.  The patient daubed at the canvas with the empty brush for a moment before she swung her arm suddenly to swirl it I paint from the art supply table.  She moved no more of her body than her arm, not turning or looking at what she was doing.  Then she went back to the canvas, painting with rapid movements.

I drew closer, peering at her.  Her aura hadn’t changed since I’d entered the room, but something opaque and dark now hung over her left arm and side, wrapping around her back.  Her half-open eyes were focused not on the canvas or the supplies near her, but slightly upward and far away.  Her mouth was slack.  Goss and Wrothen stood on either side of the head of the bed while I moved closer and then past the foot of the bed, more interested in watching Julianne than seeing what she was painting.  Stymak was somewhere behind and to my right, but I didn’t spare any attention for him.

The unconscious woman hit me in the face with the paintbrush.  No one really expects a vegetative patient to flip a brush loaded with sage green paint into their eye from six feet away, but I suppose I should have seen it coming — I’m a ghost magnet.  I wasn’t sure who or what might be in charge of Julianne Goss’s body at the moment, but it seemed to have a juvenile sense of humor; right after the paint came the babbling.

I reeled back a few steps.

“Turn on the recorder!” Stymak yelled.

“I can’t see it!  You turn it on!” I shouted back, swiping thick sticky oil paint off my face and hoping nothing else was winging my way while I was temporarily blind.  You wouldn’t think oil and pigment would sting so much…

I could hear Stymak and Goss scrambling around me to get to the table where the digital recorder lay.  An alarm was going off from one of the machines monitoring Julianne’s bodily functions.  I held still in spite of an urge to help — which in my state would be no help at hall; I didn’t want to blunder into the machines by mistake and I could feel the paint starting to burn my eye.  I really needed to get to the sink without falling in to anyone’s path or crashing into anything vital, but I couldn’t find the bathroom without aid.  I cursed my inability to get out of my on damned way, much less get a look at what was happening to Julianne Goss.  I squeezed my eyes closed and took a deep breath, shutting out the distractions in the room as I sank into the Grey.