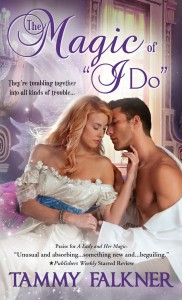 “I’m afraid you don’t have a choice, Miss Thorne,” Fin drawled.  “Trust me, the idea of it doesn’t settle well with me either.”

He didn’t like the idea of sharing a bedchamber?  She highly doubted that .  A small part of her was momentarily offended by his comment.  She’d been told she had striking features.  Why don’t you want to share a bedchamber with me?” she asked impulsively.  She wanted to bite the words back as soon as they left her mouth.

“I tend to favor a warm bed partner, Miss Thorne.  Not a cold one.”  He stalked past her and into the corridor.

Her offense at his lack of interest was absolutely absurd.  But it niggled at her more than a little.  She shoved the thought aside and forced her attention back to the facts at hand.  “I think we should go elsewhere.  At least an inn would have staff.”

“They have staff where you come from, Miss Thorne?”  He continued down the corridor toward… Where was he going?  “In your land, Miss Thorne?” he prompted.

Of course.  Her land was structured much like his, except hers was prettier.  And in hers, things tended to be a little more fanciful.  “My grandfather is one of the Trusted Few, my lord.  Do not doubt my origins.”

“Trusted Few?” he parroted, his brow quirked at her.  A grin tugged at his lips.  Why was that amusing?

“The governing body in our world.  Much like your aristocracy.  The House of Lords.”

“Only you have a house with a trusted few?” He chuckled.  “Certainly, you do.”  He finally came to a grand room lined with books, which must have been his library.  Claire gazed at the overstuffed shelves.  One of her favorite pastimes was reading, and she nearly salivated at the thought of looking through all the books.  She forced her attention back to him.  “When will we be leaving.”

“When Robin sends words that his business is concluded.”  He dropped into a chair behind his desk and began to sort through a stack of correspondence.  “Is Ramsdale really your father?”

“No.” She didn’t say more than that.  Just the single word.

“We were raised by our grandparents.”  She turned and pretended to peruse the shelves.  Talking of her parents still hurt a little.  She had never met them.  She’d been raised with the fae, along with her brother Marcus and her sister Sophia.  There were never any parents in their lives until Sophia stumbled across the Ramsdales.  They’d lived in London all her life, right where she could have found them, if she’d only known they existed.  Claire still hadn’t met them.  Nor did she plan to.  Nor did she plan to meet her human brother and sisters.  The children her parents had kept.

“If the Ramsdales are your parents, I supposed I should use the family name and call you Miss Thorne,” Finn said with a much too friendly smile.

“That will do nicely.”

“No problem, miss,” he said, a crooked grin lifting his lips.  He looked quite pleased with himself.

“You my call me, Finn, Claire.”  He was taunting her.  She was well aware of it.  And he was enjoying it.

Benny bustled into the room with an armful of wood.  “My lord?” he asked quickly.  Lord Phineas motioned with an impatient hand toward the hearth.  Benny began to stack wood in the grate and lit it with a quick flick of his flint.

“There,” he said, dusting his hands together.  “I’ll take care of the bedchamber next.”  Lord Phineas nodded, obviously distracted by the contents of his correspondence.

“Thank you, Benny,” Claire said.  The boy flushed at her praise.

“I will put your things in his lordship’s bedchamber.”

“That will be all, Benny,” Lord Phineas barked.

Benny bowed to her quickly and fled the room.

“You need to clear up the boy’s misconception.”

“What misconception would that be?” He looked up at her, his blue eyes flashing at her.

“The lad is under the impression we’ll share a bedchamber.”

Lord Phineas stood up slowly.  He crossed the room to stand in front of her and bent down by her ear, where he said softly, “My darling.  We are going to share a bedchamber.”