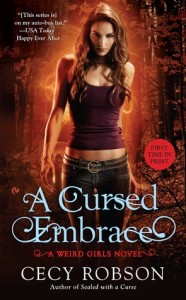 Aric shrugged.  “A little here and there.”

“Just enough to get some tail, Ceila.”  Liam spoke casually as if merely stating common knowledge.  He’d walked in to grab a pack of mini marshmallows from the pantry.  Too bad Emme hadn’t done so in his place. I didn’t need to know more about Aric’s sexual past.  The females who flaunted and threw themselves at him were enough evidence of his prowess.

Liam did a double take when he caught my open mouth and almost dropped the small package.  HIs hand shot out as he realized his mistake.  Sort of.  “Don’t worry, Celia.  All those one-might stands didn’t mean anything to him, right, Aric?”

Aric’s glare had Liam backing into the sliding glass doo.  Koda stuck his head in, his brows set deep and his long black hair descending to his thigh-thick arms.  “All you had to do was grab some damn marshmallows.  Shut your trap and get outside before Aric eats you.”  He gave me a stiff nod before disappearing outside.

Aric’s light brown eyes softened when they met mine.  “That was a long time ago, sweetness,” he whispered.  I supposed I was his way of offering an explanation or attempting to apologize.  I nodded but found myself inching away from him.  It hurt too much to think about other hands caressing Aric, especially when my own had barely touched him.  No matter how hot, his tempting heat stood no chance against my raging insecurities.  “Baby, I–”

Did you find anything, Danny?”  I spoke to Danny, but by that point I’d twisted enough to face Bren.  Bren could’ve laughed, or joked, or asked Aric for details about his indiscretions.  But he didn’t.  He sensed my hurt, and he didn’t like it.  That was the great thing about Bren.  All kidding aside, he really cared about me.

My clenched jaw screamed no, and that I was in over my head with Aric.  Bren made a motion to stand, but it was Danny who actually save me.  He cleared his throat hard enough to make him cough into his hand.  “There is something here.  Daemonium consaguineis loosely translates into demon kin from Latin to English.”  HIs finer traced along the passages as his mind worked to translate the words.  “It’s believed a new breed of demons will arise from ate and dark magic.  These demon lords, for lack of better terms, will possess the ability to cross between hell and earth without limitations, but that’s all it says.”

Oh, is that all?  Every muscle in my body saluted in tribute to our impending deaths.  One by one, the wolves entered the house and took a seat around Danny.  Emme squeezed Liam’s hand.  “What is it, Lee?”

Aric swore beneath his breath as the wolves explained what Danny had just surmised.  He leaned forward, resting his elbows against his knees.  “Does it say anything about how you stop them from rising?”

Danny’s finger continued to travel along the page.  He stopped suddenly and shot his finger back to where he started, his eyes widening as they darted back and forth.  “No.  But it does say the rise of these demons follows a significant change in the supernatural world.”

Danny slowly met my stare.  “Such as a vampire becoming whole once more.”

Taran threw her hands in the air.  “For shit’s sake, Celia.  Why the hell did you have to go and return Count Hotness’s soul?”

I stood, growling.  “If I had any clue that biting Misha would bring about the rise of freaking unstoppable demons, trust me, I would’ve have gotten defanged.”

Every head shot in my direction.  Aric rose, his anger permeating through our family room like a tidal wave.  He spit his words out like flaming arrows.  “You returned that asshole’s soul?”

“How the hell did you do that?” Liam asked, his amber eyes round with apparent shock.

I wanted to scream.  “Oh my God.  It was a total accident.  He pulled a piece of railing impaling me.  It hurt, and I reacted by biting him.  Apparently I’m some kind of…”

“Dantem animam,” Emme clarified.  “A-aaccording to the vampires it’s a rare ability to stimulate the return of a vampire’s soul.”

“We know what it is,” Aric muttered. His fists clenched at his sides.  “Why didn’t you tell me?”

I shrugged, not comprehending why Aric appeared so betrayed.  “In balancing life and death at once, Misha becomes more powerful, ad therefore a threat to other masters.  We agreed not to say anything so he wouldn’t become a target.”

Catholic guilt had a way of pointing a chastising finger at the most inopportune moments.  “Yes, Aric.  He and Bren both knew.”

Shayna tugged Arics sleeve.  We didn’t really know you guys yet when it happened.  Danny and Bren were the only ones we could turn to to make sure nothing dangerous had happened to Celia in the process.  It wasn’t anything personal, Aric.”

Aric’s features tamed as he took in the hurt settling across my face.  He lifted my hands and kissed them.  “I’m sorry.  I’m not angry at you.  That leech is one we watch closely.  I like knowing everything he’s into… and anything that can make him more powerful.”

“Especially if he’s the one bringing forth demons’ rise,” Koda rumbled.  Koda didn’t waste any time to turn the tides on Misha.  I didn’t like getting ganged up on.  And I didn’t like Misha being the go-to bad guy.  “Misha is not involved in the shift of the demon realm.  He’s not, Aric,” I insisted.  “You saw him today.  That thing that possessed him left him drained and vulnerable.  No way would he risk his soul by associating with hell’s minions.”

“What if I did it, though?  What if I somehow caused this mess to occur?”

“You couldn’t have, sweetness.  Your heart’s too pure to cause something so vile.”

I wasn’t so certain.