Today I’m pleased to introduce to you m/m romance author Heidi Belleau. Her latest title, Wallflower is out and available for purchase. Please welcome Heidi to That’s What I’m Talking About.

Today on the tour, my friend and co-writer Sam Schooler, who was my genderqueer beta-reader on this book, sits me down for an interview!

1. Rob’s main challenge throughout Wallflower is his gender identity. In a binary world, he struggles to find a way to ride the line between genders. What made you decide to write a book about a non-binary trans* character?

Well, partially it was because I hadn’t done it before and wanted to try. Partially because having a genderqueer character in this setting allowed me to write stuff I wouldn’t have been able to do with a cis guy. 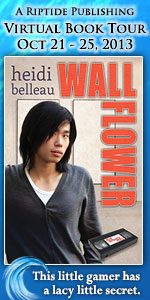 3. Dylan is Inuit, and he is staunch about rebuffing stereotypes. What sort of research did you do to bring Dylan, a man of color from a race of people historically misrepresented to life as a realistic, nuanced character?

Well, like with anyone else, it’s about writing him as a person first. Really setting out, right from the start, to write a man who is Inuit as opposed to an Inuit Man™. Especially when it comes to our First Peoples, we have this very bad tendency to simplify and homogenize, to treat them as a fantasy race like elves, to pretend they’re all Dead and Gone, etc. So yeah, person first. I wrote a guy who draws comics, who’s very plain-spoken but incredibly kind. But I didn’t write him “colour-blind” either. His ethnicity and his background are very much a part of him, so I always kept that in mind.

As to specific research, well, I live in a city that’s around 30% First Nations, although people here are Cree and Beaver (Dane-Zaa), not Inuit, so I had to be careful not to leave the Inuit part out of the equation. I did, however, steal his dress sense and way of speaking and his self-image with regard to his race from the Native people I’ve known here. What I didn’t get from real life, I figured out from the internet. I did research regarding trans-racial adoption, and specifically of First Nations/Inuit children being adopted by white people in Canada. I did research regarding Inuit customs/body language. And then there was the part of my job where I had to find out the body hair situation. Because, you know, different ethnicities often have different amounts/textures of body hair and when you’re writing erotica that’s something to take into account . . . but it’s not exactly as common to find porn of Inuit guys as it would be to find white or East Asian or African American. So, you know, it’s a little bit of everything, isn’t it?

4. Dylan and Rob end up spending time together while they work on a group project for school. Have you had any ridiculous group project experiences?

My only really strong memory of a group project was in a third year English class, acting out a scene from the screenplay for Parade’s End by Ford Maddox Ford. Another girl and I wound up in a two-person group. I dressed in drag to play the male lead, and put on my best Stiff Upper Lip. Even though all of the performances were great, though, somehow we won the skit contest and got a prize of a bottle of whiskey and a box of truffles. We ended up sharing the bottle of whiskey with the entire class, and that’s the story of the time I drank whiskey in school.

5. Both Dylan and Rob have sisters who significantly influence them. Was this an intentional parallel? Did you draw on your own sibling relationships for inspiration?

Yes! It was definitely an intentional parallel.  I think I even specifically mentioned how they’d both grown up in the shadow of a charismatic older sister, and how they both responded differently to that (Dylan becoming outspoken/supportive, Rob becoming withdrawn/jealous), but how neither of those relationships turned to bitterness. As for did I draw on my own sibling relationships? Yes and no, I suppose. I’m the oldest in my family, whereas Rob and Dylan are both the younger. I do think I am outshone by my siblings at times, though! Especially my younger brother, who is charismatic, very handsome, graduated at the top of his class, speaks French fluently, and graduated from school with a degree in Engineering.

And here I am writing dirty books. 😉 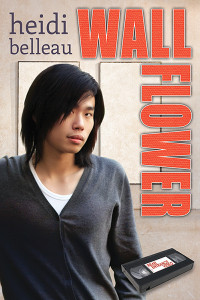 Buy it now or read an excerpt at Riptide Publishing!

Heidi Belleau was born and raised in small town New Brunswick, Canada, but now lives in the rugged oil-patch frontier of Northern BC with her husband and daughter. She has a degree in history from Simon Fraser University with a concentration in British and Irish studies. Her writing reflects everything she loves: diverse casts of characters, a sense of history and place, equal parts witty and filthy dialogue, the occasional mythological twist, and most of all, love—in all its weird and wonderful forms. Visit her online at www.HeidiBelleau.com, or chat with her on twitter: @HeidiBelleau

Win an e-copy of Rear Entrance Video #1: Apple Polisher! All you have to do is leave a comment on this or any of the other Wallflower tour posts. Each comment counts for another entry, so be sure to follow the entire tour. Just make sure your comment includes a way for me to contact you, be it email, twitter, or facebook. On October 27th, I’ll randomly draw a winner from all the entries who will receive a copy of Apple Polisher in their choice of format. Good luck!