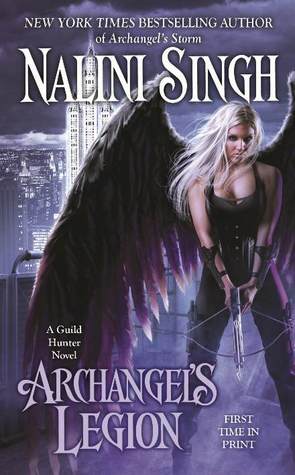 After a two-book departure from featuring the primary couple of the Guild Hunter series, Nalini Singh brings back one of my all-time favorite pairs, Raphael and Elena, front and center. Archangel’s Legion opens with a significant and unexplained event (the Falling) that nearly cripples Raphael’s Tower stronghold in Manhattan. Determined to make a show of strength, Elena continues her work as a Guild Hunter, making some very public appearances to show the world that Raphael and his territory are business as usual. She partners with Guild buddy Random to find a missing Hunter – one presumed to be close to the edge and possible going rogue. Along the way, they discover a mysterious illness that is killing vampires – something thought impossible.

As we discovered in earlier books, the world is entering a time called the Cascade. Ms. Singh writes of the Cascade that it is a confluence of time and certain critical events that lead to a surge of power in the Cadre. No one, even the Archangels, know what will happen, only that it will most likely lead to war between the Archangels and a dramatic shift in world power. It is this unknown that leaves Raphael and his Seven unsure if the horrible events happening within his territory are events of the Cascade or deliberate attacks made by Archangels with new found power.

One thing I adore and admire about Ms. Singh’s writing is that everything has a purpose and plan. The book begins with three mysterious things: The Falling, the diseased vampire, and a missing Hunter, plus a few other actions/events tossed in. It feels like so much; however Ms. Singh is a fantastic storyteller, and no event is random. I enjoy looking for the connections and trying to piece together the puzzle as I read. Somehow all the events will tie into one another, and it’s always one heck of a journey.

I love that this book is back to Raphael and Elena, and while crazy events are happening all around them, their love and relationship are the focus of the story. Although the pair are still in their honeymoon phase of sorts, this time around they have some bumps to smooth over. Elena questions herself and her relationship with Raphael. She fears he will change her and worse, that she makes him weak. She struggles with her past issues and her relationship with her father. Her internal struggles spill over into her relationship with Raphael, and how the pair deal with everything is so real and wonderful. Their emotional journey is fabulously written: poignant, touching, and fulfilling (plus angry angel sex!).  Raphael and Elena make a great team and couple. I absolutely love their back and forth; how they communicate, live, fight, and love. They respect and care for one another so deeply and thoroughly; it fills my heart and mind with joy when reading this pair.

One particularly poignant moment comes when the pair argue over using Ransom. Elena wants to remain loyal to her friends and Raphael will use a “mere mortal” so that he can get answers. This scene is incredible and very well written. I admire that they fight this out and end up better for it. It takes a special kind of writer to successfully tell the tale of the same couple from book to book, and Ms. Singh is one such author.

It was great to see Elena back on the ground as a Hunter for the Guild. This is where the series started, and I feel shines most brightly. Elena is a strong woman who will not be caged. Being a Hunter is who she is, and watching her perform her born-abilities is a treat. This is where she is most confident, and this time around, it helps counterbalance some of the frustrations of being an angel and the Archangel’s Consort. It also allows us to witness Elena among her mortal friends and the ramifications of what that means to her now that she is immortal.

Elena’s history: the brutal murders of her sisters, her mom’s suicide, and her father’s issues with hunters, is in the forefront of Archangel’s Legion. Not only are the nightmares still haunting Elena and impacting her life, but now it seems her father is going to make the same mistakes over again with Elena’s half-sister, Eve. Rediscovering her past and getting to the very nature of the events is cathartic and important in understanding what drives both Elena and her father.

Personal growth isn’t limited to Elena during the story. Raphael must also adapt and change with his mate and because of the Cascade. As the Archangels each evolve due to the Cascade, Raphael is also impacted. He struggles with the allure of heady new powers, while looking to his mother and (dead) father’s own personal journey for guidance on what to expect. He must decide how he will come to terms with the fact that he is growing into more. How he and Elena deal with this together is extremely moving.

Conflict is imminent, so it is no surprise when one Archangel declares war on Raphael. As the situation builds to a crescendo, I found it impossible to put down the book. The concluding battle was well-written and drawn-out to just the right length. I appreciate that it wasn’t all build-up and then over, which can happen in paranormal romances.

Archangel’s Legion is full of romance, love, friendship, action and power. The depth of the tale and growth of the characters is sublime. This story has meat, and it’s not for the faint-hearted. The emotions are raw and real. They are thrown at the reader with full-force, and I appreciate this. Archangel’s Legion is my favorite book thus far in the Guild Hunter series and is certain to be in my Top 10 reads of 2013.

Angels are falling from the sky in New York, struck down by a vicious, unknown force.

Vampires are dying impossibly of disease.

Guild hunter Elena Deveraux and the Archangel Raphael must discover the source of the wave of death before it engulfs their city and their people, leaving New York a ruin and Raphael’s Tower under siege by enemy archangels.

Yet even as they fight desperately to save the city, an even darker force is stirring, its chill eyes trained on New York…and on Raphael. Rivers of crimson and nightmares given flesh, the world will never again be the same…