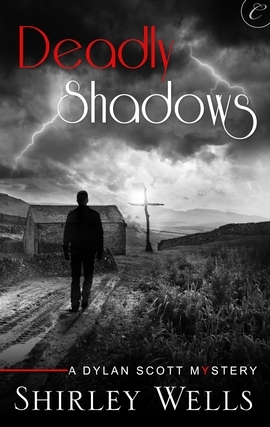 As I was preparing to write my review for Deadly Shadows, I went back and looked over the previous reviews I’ve written for the Dylan Scott series, and two things came to mind: consistently entertaining and engrossing, and always original. Each book in Ms. Wells’s highly addictive series brings an exciting new tale that is uniquely its own story while carrying on the same characters from book to book. Deadly Shadows is no different in this regard. I found myself unable to put down my Kindle once I started reading.

The book opens with a gruesome murder committed by an unknown assailant. The scene then suddenly shifts to a bar where we meet Joe Child. Joe is an ex-con turned bible-thumper, and he is the reason our hero, PI Dylan Scott was removed from the police force years ago (you can find that back story in some of my other reviews). Joe is attempting to convince David Young (they used to do jobs together) to come into his flock. While they are discussing the pros and cons of Joe’s new-found faith, Davey is hauled off by Dawson’s Clough’s finest where we discover that (*VERY MINOR SPOILER HERE*) Davey is none other than Dylan Scott, working undercover for the Dawson’s Clough police force.

Dylan is deep undercover, reprising his role as a two-bit crook from years ago in order to discover what has happened to two young girls missing from town. While neither girl knew the other, they had both spent time at Joe’s commune. Dylan is convinced Joe either has something to do with the disappearances or has knowledge of what happened, and Dylan wants to bring him down. However, not everyone sees things the way Dylan does. Many appreciate the work Joe is doing to serve the town’s homeless.

I absolutely love how Ms. Wells sets up her mysteries. The story is told from multiple points-of-view, which are masterfully written so you cannot be certain if a suspect is innocent or guilty. Deadly Shadows spreads out like fan from the first chapter: each character and scenario is its own mini-plot. Yet the complexity is never overwhelming or extraneous. I am driven to look for clues in every scene and interaction. It’s exhilarating, exciting, and nail-biting!

One aspect of the series that I adore is the human dynamics and emotional realism of each character, but most especially between Dylan and his family. With Dylan undercover, I figured this feature of the story would be sparse. But NO… not in the least. Dylan’s wife Bev is at home experiencing a health issue. Reading her POV, experiencing her vast array of emotions and her thought process is simply gripping. As a woman, wife, and mother, I found myself right in Bev’s place and wanting to hold her hand as she wonders what is happening – and doing so without her loving husband by her side. How Bev and Dylan communicate in the face of a health scare and while he is undercover is touching, with each scene more satisfying than the previous.

As the list of suspects grows and Dylan questions the truth, I began to figure out what has happened. Well, most of it, anyhow. Ms. Wells does a fabulous job bringing together all of the pieces of the puzzle, making each one fit just right. All of the questions are answered and the who-done-it aspect of the story is an absorbing tale.

I think that Deadly Shadows is probably my favorite book of the Dylan Scott series thus far. While I was able to solve the mystery itself, it is only because of Ms. Wells adept story-telling. Each character and scene kept me engrossed in the book. The emotional/human component of the story is well-written and enriches the book immensely. I will warn readers there is a huge bomb dropped at the end of the book, and it killed me in the kind of way that I’ll be stalking the author until I have the next story in my hands!

Before his disgraceful dismissal from the police force, Dylan Scott worked undercover to get close to notorious drug dealer Joe Child. Now, Dylan works as a P.I.–and Child heads up a religious commune near Dawson’s Clough. But after two girls go missing from the refuge, the cops need Dylan’s help to find out if Child is saving souls as a cover for something more sinister.

The investigation means going back undercover as a petty crook–a tough gig for a detective who has recently worked some high-profile cases in Lancashire. Even on a remote farm, Dylan’s in constant danger of being recognized. Not to mention the strain his long absences have put on his family life.

Still, Dylan won’t rest until he finds the missing girls. But the longer he looks, the harder it is to tell the sinners from the saints. And the truth may be more than this bleak northern town can handle.