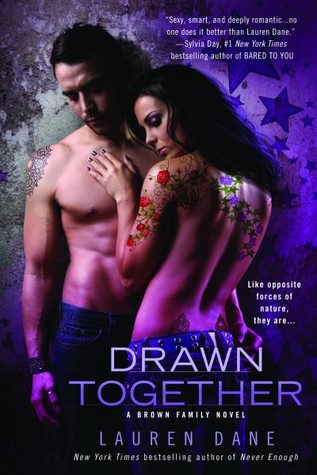 Drawn Together takes us back to the roots of the Brown Family Novels.  This is the story of Raven Smith; that is not her full name and it is full of meaning—which I will not spoil for you.  It is, however, one of many things that makes Raven unique.  Raven is tied to the Brown family through Erin, her best friend (Laid Bare, #1) and Erin’s brother Brody (Coming Undone, #2).  Raven used to date Brody, but now works for him in his tattoo store as a talented artist.

This far into the series, characters from nearly all the books make appearances or are referenced.  In fact, they make up almost all the peripheral characters populating the story.  For this reason, it’s easier to understand some of the dynamics if you have read the previous books.  It’s not absolutely necessary, but I think reading books one and two makes for a better read.  This book also crosses over into Dane’s Delicious Series making for an even larger casting call.  The Brown family and their friends tend to be so overly supportive that it can be drippy at times.  I laughed out loud when Raven made the comment, “They’re all so nice.  Perky.  Everyone loves everyone else and they’re close and blah.”  That kept me going during the slower parts to the end of the book where we finally get the character growth and change that we’re yearning for.

I appreciated how the twist in this book, which I did not see coming, mostly played out.  In previous books, such as Tart, Dane simply told us that the most significant thing in the book happened after the fact.  In contrast to that, Drawn Together lets us experience the events, the significance of them, and how they affect and change her characters.

In general, Dane’s writing tends to be somewhat hit or miss for me, and I liked this one a little better than others that I have read.  I think a large part of that will be what the reader brings to the story, especially since Raven and her love interest Johan Warner are in the neighborhood of forty years old.  This is not the blush of young love, it’s the “been around the block and so beat up I’m never going to fall again” love.  There is a fair amount of dom sex in this novel, it is after all erotica.  I found it to be light.  I don’t think the typical romance reader would be put off by it.  That’s not surprising when you consider that Jonah isn’t especially convincing as the bossy guy he’s supposed to be.  But then, he gets Raven in a way that is entirely endearing.  You want to see them together.  He is strong AND mature.  That is supremely refreshing in an alpha male type.

Raven is closed off and prickly.  “The thing people did not understand about Raven, because they only saw her outside, was that she didn’t say anything casually.  Or easily.  Though she was often blunt, it was her way of trying to connect on some level.  But when it didn’t work, it only pushed her further away.”  Jonah sees through that and pushes through to her.  When he’s being dominant, when Raven lets him, she allows herself to put her guard down.  She softens and surprisingly it makes her seem stronger, not weaker.  She becomes more endearing then.  If you have been enjoying the Brown Family books, don’t miss this one.

Tattoo artist Raven Smith is blunt and hard, broken and jaded, dark and beautiful. While she doesn’t hide her painful past, she does keep a wall around her heart. She’s free sexually—but no one gets to the real Raven beneath the prickly exterior.

With a voice like smoke, Jonah Warner is a smooth-talking, highly successful attorney, with a body that should never be hidden by a suit. He’s the kind of man who never takes no for an answer and always gets what he wants. And what he wants is Raven. She’s a survivor, and he finds that incredibly alluring.

Jonah gets under her skin in a way Raven has never experienced. He makes her break all her rules—including her no-monogamy rule.

But when a figure from Raven’s past shows up at the tattoo parlor and drops a bomb into her life, their relationship will face the ultimate challenge…

One response to “Review: Drawn Together by Lauren Dane”