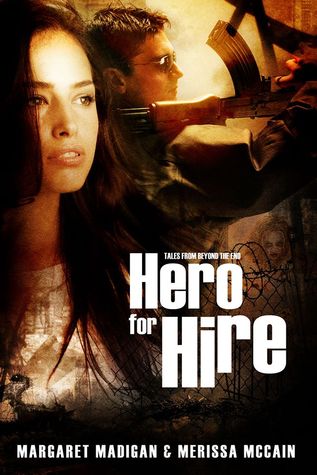 Although Hero for Hire is short, it packs a fun and thoroughly entertaining punch!  Gikany and Una enjoyed this adaptation of Snow White and the Seven Dwarfs and recommend it to anyone looking for a silly and engaging short story.

The story of Hero for Hire revolves around Gywn, an absent-minded scientist who is on a personal quest to find the antidote to the virus that has caused a zombie epidemic.  In order to achieve her goals, she seeks help from a “hero for hire”: Mr. Rafe Charming (the pun is intended).  The plot moves quickly and flows smoothly.  It is surprising how much Ms. McCain was able to fit into such a short length.  Rafe is handsome and “Dread Pirate Roberts”-esque, but we find him to be a man with a good heart.  We will not give away the “dwarfs,” but their addition really adds to the richness of the story.  The overall story arc around the cause of the zombie apocalypse and the cure was fascinating.

Although the romance moves quickly it is not surprising.  In a world where most men want to literally take a bite out of you, there are very slim pickings.  We find two people who make the best out of a really crappy situation – and actually find love.  We seriously hope there will be a concluding novel that hopefully gives us more of the happily-ever-after and shows us if Gywn is able to save humanity.

If you are looking for a really fun and well done adaptation of Snow White and the Seven Dwarfs – look no further.  Go and pick up a copy of Hero for Hire, we’re sure you’ll enjoy it as much as we did.

One day her prince would come…disguised as a zombie-killer. Having been disgraced and tossed out by her own scientific community, Gwyn is convinced she can develop a cure for a SuperVirus that has turned the Infected into zombies. By pure luck and determination, she has survived on her own for years, but while out scavenging, a clash with the local zombies leaves her potentially infected. Now, running out of time, she needs help and takes a chance on a hero for hire.

Rafe loves the apocalypse. Since the world went to hell, everything’s come up roses for him. Having procured a mansion in the Hollywood hills, adopted a slew of homeless boys and one cantankerous but useful Doc, Mr. Charming is benefiting from the nasty zombie infestation. His job? Killing the bastards, which he considers fun anyway. Gwyn Snow needs Rafe Charming to help retrieve her research from the Paragon Pharmaceuticals lab, also known as Zombie Central. Believing she can yet save the world, Gwyn makes Rafe question what’s right and what’s worth the fight.

Purchase Info:
Hero For Hire (Tales From Beyond the End #1)

One response to “Review: Hero for Hire by Merissa McCain & Margaret Madigan”