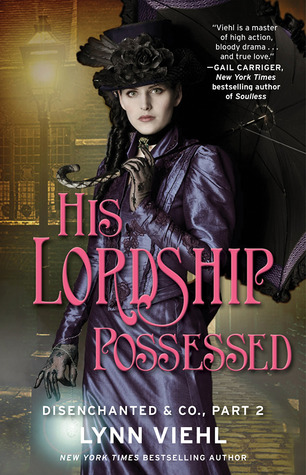 Note: this review will contain spoilers from the first title, Her Ladyship’s Curse, which is actually the first part of the two part story making up the novel Disenchanted & Co. If you plan to read the novel in its entirety when it comes out in January – or – if you haven’t read Ladyship, please be warned! His Lordship Possessed truly is the second half of a larger story, and I do not recommend reading it as a stand alone story.

His Lordship Possessed picks up immediately where Her Ladyship’s Curse ends. In the first half of the tale, the reader was introduced to Kit Kittredge, a sort of “private eye” who debunks magical curses and spells. Lucien Dredmore is her nemesis who is terribly attracted to Kit and wants her all to himself. After a brief weakness of spirit resulting in exciting sexual encounter between Kit and Lucien, Kit finds herself locked away in his estate. Relying on her mysterious grandfather, she makes a daring escape, only to find that Lord Walsh is attempting to ruin her.

I completely devoured His Lordship Possessed in a matter of hours. I could NOT put this exciting story down for more than a moment. After doing a fabulous job laying the groundwork and creating an interesting and intriguing world in the first book, Ms. Viehl sends her characters on a non-stop adventure, full of unforeseen twists and amazing revelations. The purposeful actions and events are well-planned and masterfully written. One really doesn’t need more from a book, right?

But wait… that’s not all! As I stated in my review of Her Ladyship’s Curse, the characters of this tale are an exciting aspect of the book that make it so much more than just an adventure. Each of the characters undergoes further development and adds heart to the story. However, it is Kit herself that truly makes this story a wonderful piece. Seeing everything from her point-of-view, I was heartbroken as Kit watches her life unravel due to the machinations of Lord Walsh. Her feelings and subsequent actions add complexity to the story and give readers a character to root for and admire. Add to this her complex feelings towards Lucien and their growing affections, and you have a beautiful romance as well.

Meanwhile, we learn the true nature of what happened to Lady Walsh (from the first book), as well as a detailed and elaborate history of events that shape the current conflict with Lord Walsh. We learn if in fact magic is real, and what the repercussions of the truth mean for our heroine. The added world-building is fascinating and completely unique.

I enjoyed the direction the book headed, creating some difficult choices that Kit had to confront. I liked that she took charge and faced each moment with everything she had. However, without giving spoilers, I will say that I did have a minor issue with how things resolved themselves in the end. While the concept of what happened made me cringe a little, I actually am please with the results, so I can’t judge Ms. Viehl’s choice too harshly. Additionally, it left the door open for some exciting adventures ahead, and I cannot wait to get my hands on Kit’s next story!

The second half of Disenchanted & Co.—the thrilling conclusion. In a steampunk version of America that lost the Revolutionary War, Charmian (Kit) Kittredge makes her living investigating magic crimes and exposing the frauds behind them. While Kit tries to avoid the nobs of high society, as the proprietor of Disenchanted & Co. she follows mysteries wherever they lead.

Reviews in the Series:
Disenchanted & Co., Part 1: Her Ladyship’s Curse