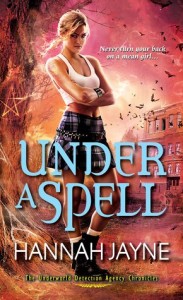 I groaned and grabbed my door, flinging it open.  “Nina, what the hell is go–”

“Shhhh!”  I was met by a chorus of angry hisses and then the business end of a megaphone as Nina yelled, “Cut!” directly into my face.  She pinched her icy, bony fingers around my elbow and yanked me into the kitchen, which had miraculously gone from cozy mess to break room chic: our mismatched collection of hand-me-down mugs with unappetizing statements — Carrie for Prom Queen, The Problem is Gonorrhea— had been replaced by an orderly heap of stolen straight-from-the-UDA Styrofoam stand-in mugs and brown paper napkins stamped with the Starbucks logo.  Our sugar bowl was stuffed with pilfered packaged sweeteners and coffee stirrers, and bottled water bloomed from an ice bath in the sink.  There was a hastily arranged basket of individually wrapped snacks that I recognized– basket, bagels, and all– from the Red Cross station on Second Street.

Nina swept an arm toward the cleared out living room.  “Auditions.”

I scanned the room and frowned.  “Auditions?  For the UDA commercial?”  I rolled up on my tip-toes and eyed the woman pacing my living room.  She couldn’t have been under five feet nine inches tall or over eighty pounds.  She took short, careful steps, smacking a sheaf of papers against her bony hip as she spoke soundlessly, her eyes bright and batting, engaging the struggling kitten on my Hang in There! poster.

Nina produced a clipboard from somewhere and thrummed through a stack of eight-by-ten black and white glossies.  “Um, that is Stella MacNeir.  Don’t you just love her?”

I pinched my bottom lip.  “What department does she work in?  I don’t think I’ve ever seen her.  Is she new?”

Nina leaned through the kitchen-living room pass-through.  “Thank you, Stella.  We’re going to wrap up for the day.  We’ll be in touch.”

“Wait.  You’re auditioning people for the UDA commercial who don’t work at UDA?”

I gaped as Stella slid into a neon-pink leopard-print jacket and slipped one of my Frescas into her knock-off handbag before she slunk out the door.

Nina looked casually over her shoulder as though Stella would reappear, perhaps in even more thespian-slash-sex-store-worker glory.  She looked back at me, using her index fingers to rub tiny circles on her temples.  “look, it’s been a really long day.  And we need Stella.  You know how many actual Underworld employees show up on film?  Two.  Two!  And one of them is a centaur.  So as you can see, outsourcing this part was necessary.”  Nina’s face suddenly brightened as her eyes slipped from the top of my forehead down to my toes.

I stepped backward, mashing my hips against our cheap Corian counter.  “No.  Oh, no.”

Nina framed me with her hands and grinned so widely, I could see the tip of her fangs and the tops of her gums.  “Oh, you’re perfect.”

Nina’s arms dropped to her side and she pushed out her swollen lower lip.  “You have no idea what I was thinking.”

“I’ve lived with you way too long, Neens.  I know exactly what you’re thinking and the answer is a giant, loud, resounding, no.  Scratch that–a no way in hell.”  I hopped up on the counter and plucked a mostly wrapped muffin from the Red Cross stash and eyed Nina, who said nothing.

“You were going to ask me to be in your commercial,” I said then, fishing for a bottle of water to wash the sawdust muffin crumbs out of my trachea.  “Right?”

I paused, water bottle midway to my parted lips.  “You weren’t?”

“Oh!”  Nina clapped a hand over her candy-pink lips as her eyebrows dove together in a sympathetic V.  “Oh, now you’re sad!  Don’t be sad!  I can’t believe I hurt your feelings. I didn’t mean to do that.”  Nina paced dramatically while I looked on in wide-eyed confusion.

“Oh, honey, you know what?  You’re too important to me.  I am going to put you in my commercial.  You deserve, probably more than anyone, to be in this commercial.  If anyone should be the voice, the image of the Underworld Detection Agency, it’s you.  It’s Sophie Lawson.”

Nina held up a silencing hand.  “Not another word.  It’s done.”  She yanked me off the counter and toward her, my chest mashing into hers in an overzealous hug that nearly knocked the wind out of me.  “You don’t have to thank me, sweetie.  You’re my best friend.  Of course I want to have you in my commercial.  Oh, I feel so bad–it was almost an oversight.

She flitted out of the kitchen and I stood there, completely dumbfounded.  “No, that’s not what I meant.  That’s not–I don’t want–”

But Nina was already out of the room and I was left with my day-old muffin and the second most horrible job in the world.

2 responses to “Sunday Snippet – Under a Spell”