Today I’m pleased to bring to you Sorcha Morbray who is here to talk about her new book, Claiming His Cowgirl. 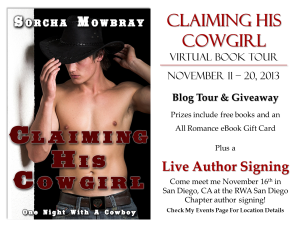 I am excited to see the next story in the One Night with a Cowboy series come out. I like these hot little short stories featuring a happy ending—or at least a happy for now.

Once again set at the Golden Mustang Dude Ranch, this time I’m telling the story of the ranch owner. Cassie is a country girl at heart, which is why she loves the Golden Mustang—even if it is a mild version of real ranch life.

Cassie, like some of us, was previously engaged. In her case environmental pressures hastened the end of the relationship. Her city-man couldn’t hack ranch life. Even the watered down version. That left Cassie alone to manage a business plus a ranch, which meant her love life got put on the back burner.

I was once engaged—back when I was 19 and sure I was in love, the forever kind. Then reality intruded. I had to leave school, and with a little distance I realized the future wasn’t as bright as it had looked. I called off the engagement and sent his ring back.

As often as we romance writers tell stories of love overcoming impossible odds—it ain’t always so. Of course we mere humans often go on to find love in other places which makes it easier to look back on past attempts with humor and wisdom.

I want to hear about your near misses and brushes with forever. Or maybe the one that got away. Comment below and then be sure to enter to win prizes via the Rafflecopter form below (may be a link). 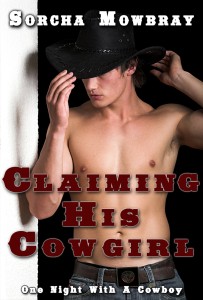 Cassie Truhart is too busy with life and the Golden Mustang Dude Ranch to worry about love. Especially since her fiancé dumped her for an easier life in the city. Elbow deep in horseshit, she never expects to meet a man capable of commanding not only her attention, but possibly her love.

Trent Jones agreed to a blind date to appease his pesky younger sister. He never imagined finding a woman that would rouse every dominant instinct he possessed, much less love. Good thing his real date cancelled at the last minute.

As Cassie and Trent indulge their strong sexual attraction, he must discover if one night with a cowboy is long enough for him to claim his cowgirl. 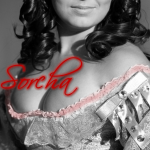 Sorcha Mowbray is a mild mannered office worker by day…okay, so she is actually a mouthy, opinionated, take charge kind of gal who bosses everyone around; but she definitely works in an office. At night she writes romance so hot she sets the sheets on fire! Just ask her slightly singed husband.

She is a longtime lover of historical romance, having grown up reading Johanna Lindsey and Judith McNaught. Then she discovered Thea Devine and Susan Johnson. Holy cow! Heroes and heroines could do THAT? From there, things devolved into trying her hand at writing a little smexy. Needless to say, she liked it and she hopes you do too!

Cassie bent over and jammed the shovel into the smelly mix of hay and horse dung. The pungent odor hung heavy in the air as she flung the shovelful of mixture into the wheelbarrow. Almost done.

The streaming rays of sun licked the barn through the open door. Ownership of the Golden Mustang Dude Ranch was everything she’d dreamed of and more, with one small exception. Her ex-fiancé had ridden off into the sunset—without the girl. He’d lasted two months before declaring he couldn’t handle ranch life.

The dude ranch was so far removed from real ranch life it wasn’t worth the effort to explain. The Mustang made good money from the guests that came for the atmosphere. Very few vacationers sought out a real ranch experience. They came to use the spa and lounge by the pool. In winter they came for the snow and the pageantry of Christmas. Most folks weren’t looking for anything more ranch-like than a short jaunt on horseback.

If this were a real ranch, the animals they cared for would be their life’s blood instead of relegated to ambiance. The last of the dirty hay landed in the wheelbarrow. Cassie wiped the sweat off her brow and set down the shovel. With a solid grip, she lifted the barrow and headed toward the compost pile. Hay and horseshit mixed with kitchen scraps made fantastic dirt. Back in the barn, she spread fresh hay in all the stalls she’d cleaned. The raspy rumble of a masculine throat clearing startled her.

“Shit! Do you always sneak up on people like that?” She returned to spreading hay.

“Sorry, ma’am.” He tipped his hat in a mingled greeting-apology.

“No worries. I was probably over-focused on a simple task.” She glanced back and smiled at him. Whoa. That was a real cowboy. Not some duded-up city boy. Worn jeans molded to strong thighs. His shirt fit him like it was made for him, and the Stetson on his head would have looked wrong anyplace else. She stopped spreading hay and faced the stranger. “Is there something I can do for you?”

“I was hoping to get in a quick ride. Feeling kind of antsy.” He let his gaze drift down her body in a slow, blatant appraisal.

*Note: The giveaway is run by and sponsored the Sorcha Mowbray. Please direct questions to the author.