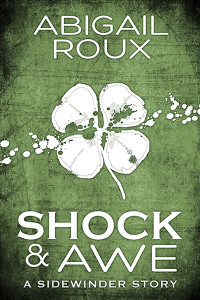 Born of an anti-smoking campaign, a healthy dose of serendipitous chemistry, and a contest bribe, Shock & Awe is, in my experience, one of the best gifts of writing an author has ever given to the fans. This offshoot of the Cut & Run series shouldn’t exist (I recommend looking up the chain of events if you don’t already know it—it’s a fun chain of events), but, thankfully, now does. Kelly wasn’t supposed to survive the events of Touch & Geaux, and Ms. Roux had other plans for Nick. But, the characters had a mind of their own, and altered the shape of things to come.

I admit that I had mixed feelings about Nick O’Flaherty when he was formally introduced in the series. My heart was overruling my head, as has been a consistent side effect of reading Ms. Roux’s works, and it took a second reading for me to understand his perspective a little better. By the next book he appeared in, Armed & Dangerous, I began to love him, and upon finishing Touch & Geaux I was completely hooked. Nick is a good man through to his soul and a ferociously loyal friend, ranking his allegiance to Team Sidewinder—his real and chosen family—above all else.

Kelly Abbott, on the other hand, has always been a favorite of mine. From his initial appearance, he’s been an open, shiny presence, living honestly and with a generosity of self that is so very rare it’s stunning. Referred to more than once as the “heart” of Team Sidewinder, Kelly lives his life without pretense or malice, his devotion to the other members of his unit unwavering and all encompassing. Similarly to Nick, they are the only real family he’s ever known, and there’s nothing he wouldn’t do for them. He is always willing to put himself on the line in every way for those he loves, even if it hurts him. One of the things that made me love Kelly even more in Shock & Awe is that, although Kelly wants everything that being with Nick promises to be, he knows Nick so well that he is willing to settle for whatever piece of himself his best friend is able to give.

Though the chemistry between them is undeniable, their differences are substantial and add intensity and genuineness to their situation. Whereas Nick sometimes wrestles with the concept of right and wrong, yet usually holds true to his principles, Kelly doesn’t seem to wrestle with much of anything. What’s good for those he loves is the right path for him, making his choices both impulsive and admirable despite the possible consequences. That’s not to say that Kelly is naïve. He most certainly is not. He knows exactly how painful life can be, and, as a result, pursues whatever joy he finds with everything he’s got, regardless of the risk of heartbreak. Kelly’s desire to make Nick see what, to his mind, is a completely obvious path to happiness leaves him doing most of the pulling, while Nick’s fear of losing what they already have provides an notably substantial opposing force. Together, they are the poster boys for the “glass half-empty/half-full” conundrum, even though they’re essentially splitting the same beer.

While all the members of Sidewinder are essential parts of the whole, it wasn’t until I saw Nick and Kelly’s interactions as a pair in Touch & Geaux that the “something extra” buzzing through their connection became apparent. Described separately in Shock & Awe as “smoke and water” and “fire and ice,” they really are perfectly matched, and the heat between them is some of the most convincing I’ve had the pleasure to read yet. Ms. Roux has always excelled at capturing her characters’ passion in words, but what she has done with Kelly and Nick is especially remarkable. Their familiarity and thorough knowledge of each other make their physical intimacy immediate and good, the rightness in the way they fit together overpowering even Nick’s most persistent reservations. Forced to maintain a modicum of restraint because of Kelly’s injury, what begins as curiosity quickly turns into an overpowering hunger that neither is capable of refusing. That first kiss is one for the history books, and every touch thereafter is beyond what either of them is able, or willing, to deny.

I wish I could say I was surprised when my emotions got away from me when reading Shock & Awe, since it’s just not a typical response when I read, but I’m not. Ms. Roux knows how to torment her characters and readers expertly, and manages to do so while leaving her audience begging for more. Kelly and Nick possess an openness and honesty which makes their dialog flow effortlessly and their mutual attraction seem as real and wonderful as a work of fiction could possibly convey. But, the same is true of the pain they must face as well. The final scene of Shock & Awe is wrenching, but it was the scene on Kelly’s porch, when his world is turned upside down with no warning that left me completely undone. Without giving further details, what Kelly expresses is nothing short of agony, and my heart ached for him and Nick both.

Thankfully, Ms. Roux didn’t leave her readers hanging on a somber note, but because she is an amazing and generous author, included another short piece titled Bait & Switch, which picks up several months after the end of Shock & Awe. In addition to a glimpse of Zane’s wellbeing and an update from Ty, we’re gifted with the continuation of Nick and Kelly’s story, which was more of a relief than I can adequately express. All of the lust and wanting they weren’t able to fully indulge in during their time at Kelly’s cabin is there in full force, with none of the doubts and questions they were restrained by the first time around.

Bait & Switch is a “hot monkey sex”-filled romp, a celebration, and a promise, although not without a hiccup or two. Kelly manages to be a crazy, sexy revelation (“I’ve been practicing!”), no matter how well Nick thinks he knows him. And Nick, bless him, has done some changing of his own. Combined with Shock & Awe, it is the perfect ending to a wonderful new beginning, and will make the transition between the two series much easier.

There simply wasn’t a way for me to keep this review purely objective and unbiased. The Cut & Run series has long been one of my favorites, and I’ve been dreading the end of the series for quite some time now. Thanks to Ms. Roux’s deft handling of an unforeseeable change in plans, moving on doesn’t have the ring of finality that it once did, for which I’m extremely grateful. With Shock & Awe, she has shown that Nick and Kelly, and the Sidewinder series, in general, will just as surely claim a piece of my heart, and I am genuinely excited and hopeful about what’s still to come. 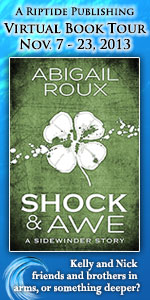 After barely surviving a shootout in New Orleans, Sidewinder medic Kelly Abbott has to suffer through a month of recovery before he can return home to Colorado. He’s not surprised when fellow Sidewinder Nick O’Flaherty stays with him in New Orleans. Nor is he surprised when Nick travels home with him to help him get back on his feet—after all, years on the same Marine Force Recon team bonded the men in ways that only bleeding for a brother can. He’s very surprised, though, when Nick humors his moment of curiosity and kisses him.

Nick knows all of Kelly’s quirks and caprices, so the kiss was a low-risk move on his part . . . or so he thought. But what should’ve been a simple moment unleashes a flood of confusing emotions and urges that neither man is prepared to address.

Now, Kelly and Nick must figure out what they mean to each other—friends and brothers in arms, or something even deeper?—before the past can come back to ruin their tenuous future.

You can read an excerpt and purchase Shock & Awe today from Riptide!

In celebration of Nick and Kelly’s coming out, so to speak, the author is giving away three of Nick and Kelly’s Heart and Clover T-shirts to three lucky commenters. She also has five sets of trading cards with original artwork and character work-ups, something Abigail intends to add new cards to every year, which makes this first year’s cards pretty important if you’re an obsessive collector like she is. This giveaway is open internationally (except where prohibited by law) and tour-wide for the blog tour, so be sure to visit the other stops on the tour. For more information on the blog tour, visit Riptide Publishing.