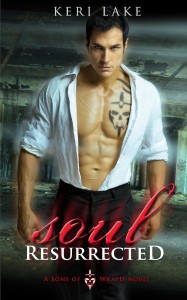 I have been waiting for Soul Resurrected since I read Soul Avenged nine months ago.  Keri Lake’s Sons of Wrath series is definitely on my auto-buy list, and for fans of PNR and UF, it should be on yours, too!

What I love the most about Ms. Lake’s books is the way she builds relationships.  While the Sons of Wrath all seem to have a special connection, the reader is treated to watching the sibling relationship become even deeper as new understanding between the brothers is reached.  Even something as simple as making connections with those chatty and prone-to-gossip Gambis Demons is important to a plot line.  I totally wish I could illustrate characterization and character relationships using Ms. Lake’s titles because she does it so well.

Even though I adore so much about Soul Resurrected, I must admit to skimming over some of the Draven parts.  I don’t know why, but I didn’t connect with his character as a reader.  I was kinda ‘meh’ about him, even knowing he was integral to the plot.  I mean, I caught what he did and all that stuff – but as far as having memorable moments from the title having to do with him? Um…  I also, probably, rushed through a few of the more scientific discussions having to do with the ~*new development*~ .  I understood what was said and absorbed the info, but I didn’t savor the information as much as I did everything else about this title.

Moving on to all the awesomeness …

Gavin, Zeke, Zayne, Calix, Mad Dog, Maddox and the other Sons of Wrath (did I forget anyone…???) give me the warm fuzzies.  Seriously.  I can’t wait to read Gavin’s story next.  My heart breaks for Zayne, and I want him to eventually have a HEA.  What is so awesome about this series is that with each subsequent book, I become more and more invested in the characters.  I actually care about what’s going on with Gavin in the next book already.  I’m worried about him.  I want to know how insane Calix will be when he finds out about Ava.  Most of all, which is pretty amazing, I care about all of them.  I don’t hate any of them, and none of them annoy the crap out of me.  Major deal, there.

While some people might call anyone but Logan and Calla secondary or tertiary characters, I count all the Sons of Wrath as major characters.  The secondary characters, for me, would have been Ryke and Draven, as well as all the other baddies.  The incidental characters – those met only briefly – even seemed to be purposefully planned.  I fully believe that most every character Ms. Lake takes the time to introduce with more than a cursory ‘Oh yeah.  This is Jane,’ seemed to be important to the story.  The housekeeper/Gambis demon Anna… yeah.  Important.  While you’re reading this title, as well as the first in the series, make mental notes.

Calla.  She’s an Alexi soldier, and seems to be some sort of prized possession.  Which boggles my mind because there’s a bunch of Alexi all over the previous title.  Just what makes Calla so special?  Oh yeah.  She’s a virgin.  Wait. Wait.  When I first read the virgin thing, I was like, “Oh, well.  Shit,” because I’m not a big fan of the trope.  Ms. Lake did a great job with it, though.  What I loved about Calla was that she wasn’t psychotically protective of her virginity nor was she ready to screw the next guy that came through the door.  She SAVED Logan, and for that alone I have to say that I adore the girl.  She’s sassy and she protects what is hers fiercely. FIERCELY. With a huge ROAR going on in there.  I’m glad she’s with Logan.  He needs someone to keep him out of his own head.

I totally want #LoganLove to trend on Twitter.  Quick.  Everyone read Soul Resurrected and post!  I gotta admit, I’m a sucker for a tortured hero.  Especially when it’s a paranormal hero that’s tortured.  No one fits the bill quite like Logan.  With a hot-mess going on in his own life, Logan brings with him TRUNK-LOADS of baggage to wade through before he gets his HEA.  I love the way Ms. Lake alluded to this internal struggle, maximizing it with the external conflict near the end before everything was brought into the open.  My heart hurts for Logan from the first scene to the end when he’s finally able to be with Calla without secrets and they’re bound.  The way he resisted his connection to Calla, and how he knew in his heart that she was the one for him; his internal struggles over this as well as his past.  I just simply fell in love with him.  Besides being a total hottie – and who wouldn’t fall in desperate, panty-twisting love with one of these Sons of Wrath – Logan has the one thing that makes him one of my Book Boyfriends for 2013:  the ‘I am not worthy’ syndrome.  He is SO worthy.  Throughout the book, we learn about how Logan puts others before himself.  Especially Calla.  I can’t wait to see more of Logan in future installments of Sons of Wrath.  I want to know how things are going with him (and to a certain degree, Calla).  I want to meet his son and watch him be an awesomesauce dad.

Even if Keri Lake were to write all her books about Logan, it still wouldn’t be enough for me.  I’m eager to read the next title in the series – about Gavin – and I’m sure we’ll be seeing a LOT more of the Sons of Wrath in the future.  Personally, I can’t wait!  Remember… share the #LoganLove!!!

As Wrath’s fiercest son, Logan carries the scars of fifty years spent in the most dreaded prison of the underworld, for a sin he’d kill to keep secret. Enduring decades of gruesome torture has left Logan feared by and detached from others, until a female Alexi’s blood resurrects his soul from death and, with it, the pleasures he’s been denied for so long.

Plagued by shame of her own, Calla is drawn to the ruthless demon, Logan, whose insatiable craving for her touch rouses buried passions and, for once, leaves her feeling desired.

A dark and dangerous evil has been reawakened, however, and when Calla is drawn too close to its breeding grounds, Logan vows to summon the violence of Wrath in order to keep her safe. First, though, Calla must save him from a past riddled with deceit and corruption … but only if she can accept the chilling consequences of unearthing his vilest skeleton.

Reviews in the Series:
Soul Avenged by Keri Lake (Sons of Wrath #1)

Throughout the Soul Resurrected tour, participating blogs will be posting a question for readers to hunt down on Keri Lake’s website.  Questions can be found throughout the site:  book pages, snippets, blog posts and glossary.  Most questions will be related to the Sons of Wrath series.  A few bloggers will have added bonus questions taken directly from Soul Avenged.

You can visit Keri Lake’s Scavenger Hunt page by clicking on the button.  Record your answers on the Answer Sheet.  At the end of the tour, you’ll be able to submit your responses via Google Doc right on the Scavenger Hunt page.  The individual with the MOST correct responses will win a MYSTERY PRIZE, valued at $125.

Here is the question assigned to That’s What I’m Talking About:

In Soul Resurrected, what is the name of the fallen angel that Gavin hires as security?
HINT:  Go to my blog and check out the Flash & Shorts category

So quick, click the link to Keri’s website and track down the answer. And be sure to follow the blog tour for more scavenger hunt clues!

CLICK HERE to see other stops on the blog tour!