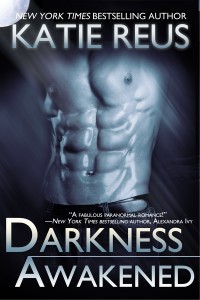 Darkness Awakened is the first book in Ms. Reus’s new Darkness series; however, it is loosely based in the same world as her Shifter Novella series (with Harlequin Nocturne). The world is full of shifters, vampires, and demons, all hidden from humankind.

The story centers around Finn Stavros, alpha of the Stavros wolf pack and Lyra Marius, a noble-born vampire. Seventeen years ago, Finn and Lyra had a forbidden affair, which he broke off suddenly to protect her from the then alpha, his uncle. Although they’ve had no contact in seventeen years, Finn has never stopped looking for Lyra. He is shocked when she suddenly shows up asking for his help to find her kidnapped daughter, Vega. The pair must team up to find the girl and save her from fulfilling a frightening prophecy.

Darkness Awakened is a solid first book in a new series. The world building is strong and unfolds fairly smoothly. The reader picks up bits and pieces of what this world is like, while enjoying the primary story, rather than being told what is going on. However, it is similar to some of what I had read in her novellas, making it a little repetitive for me. Quite a bit of emphasis is placed on an ancient prophecy, predicting that the blood of a hybrid child (half vampire, half shifter) will open gates of hell on the day of a solar eclipse. This timeframe creates a critical urgency to the search for Vega and adds tension and suspense for the reader.

Lyra and Finn share a past, which allows for a quicker road to strong emotions. The fact that both still care for and probably love the other is evident and sweet. However, Lyra has kept hidden the fact that Finn has a daughter, and that the missing girl is, in fact, his own. While I understand the reason Lyra kept the truth from Finn, and wants to continue to do so (therefore lying to him), it bothered me how strongly Lyra believed the worse of Finn if he found out the truth. She seemed to have a lot of animosity, which tainted their reunion. In fact, I felt their story became stronger once the truth was out, which thankfully happened sooner rather than later.

There are a number of supporting characters introduced throughout the story, creating a richer world (and fodder for future books). One character that stood out to me is Valerie, a warrior wolf in Finn’s pack. She is sharp, but subtle. I loved her observations and the fact that she is tuned in to what is happened beneath the surface. There is also Drake, a mysterious dragon shifter who helps the team and has a fondness for Valerie (next book?!)

The story progresses from small skirmishes and situations to a climatic battle that was pretty exciting. Discovering who was ultimately behind the kidnapping and the reasons for his actions was not overly surprising. I felt like I didn’t know him well enough to be emotionally impacted by what possibly should have been shocking actions. I wish that there had been more development on this front.

Overall, Darkness Awakened is an entertaining story and good first-in-a-new-series book. I really enjoyed Ms. Reus’s shifter novellas, and I am glad to see she decided to take this world into a novel-length series. I look forward to moving from the “introduction” to the world and into the “meat” of it with future titles. Finn and Lyra are a passionate, loving pair, making their long-awaited HEA special. I am eager to learn more about the supporting characters and find out the direction the series will take.

Rating:  B- Liked It, but I had a few small issues

Years ago he ended things between them to protect her…

As leader of one of the fiercest werewolf packs in the south, Finn Stavros is in full battle mode 24/7. He has no choice—he’s one of the few beings strong enough to fight the Akkadian demons, whose mysterious escape from hell threatens the entire world. With the battle turning bloodier by the second, Finn is ready for anything…until his vampire long lost love shows up on his doorstep in desperate need of his help, sending his heart into a tailspin. He agrees to help her, unaware that she carries a shocking secret that will turn his life upside down.

This time, he’s not letting her go…

Vampire Lyra Marius curses the day she met Finn. The ruthless werewolf promised to love her forever, but he rejected her instead—before she could share her life altering news. Pregnant, kicked out of her coven, and cast aside by the love of her life, Lyra struggled to raise their rare shifter-vampire daughter Vega alone among humans. When the 16-year-old is kidnapped and used to fulfill a frightening prophecy, Lyra swallows her pride and turns to Finn for help. But how long can she fight her feelings for him and keep him from guessing the truth about who Vega really is? As they race against the clock to save their daughter, they must defeat the lethal threat imposed by demons infiltrating the human world and a hell gate that could not only reveal their existence to mankind, but destroy the world in the process.