Devil in My Arms 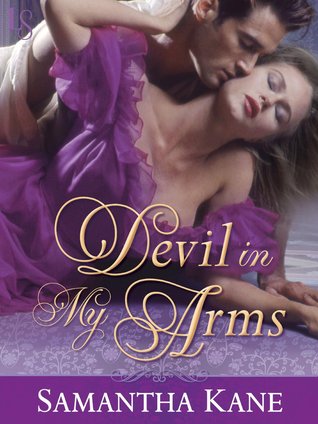 I have been a big fan of Ms. Kane’s The Saint’s Devils series since the first title, The Devil’s Thief. I enjoy her sharp witted heroes, no-nonsense heroines, and the wonderful romances each story imparts. Devil in My Arms is the third entertaining story in the series. This time around, the focus of the story is on Sir Hilary St. John (aka Hil), probably my favorite character in the series. It will take a special woman to match Hil’s cleverness and cunning ways, and Eleanor Enderby fits the bill.

The story grabbed my attention from the very start, filled with intrigue as we follow a penniless and hungry Eleanor running from her abusive husband to the home of her sister, Harriet Templeton (from the second book, Tempting a Devil). Quickly we learn of Eleanor’s horrible marriage and how she hopes that after hiding for three months, her husband will assume she is dead and move on.

I admire Eleanor and her desire to be a free woman. She has a sense of who she is and won’t let society dictate who she will be. When Eleanor first arrives, she is sent off to the country for three months to recover and remain hidden. I appreciate this time for what it is–a chance for Eleanor to get her feet on the ground and for the reader to learn more about the heroine without interference. As Eleanor begins to feel more comfortable that her freedom is real, she embraces all that she has been denied for too many years. As she steps out into society, she gains the attentions of her brother-in-law’s good friend, Hil. It is during this time of exploration that Eleanor finds her true self, and it is such a joy to experience.

Hil is a worldly man, perhaps even a rake, who has friends in high places and tours all over the continent. Eleanor is an enigma that he must solve in order to rid himself of thoughts of her. Hil’s incredibly rude and blunt words for Eleanor when they first get to know one another had my jaw dropping more than once! But he is obsessed, and he doesn’t hide it. Luckily for the pair and the reader alike, Hil begins to see the true beauty of Eleanor and his obsession turns to lust and love.

Together the pair have fabulous chemistry, but it is their frank conversations, double entendres, and sassy duel of words that capture my mind and heart. Ms. Kane pens fantastic dialogue for the couple, allowing greater emotional connection to both characters. There were a few moments in which the raw nature of the discourse brought a few tears to my eyes.

There first coupling was pretty hot – but it was the circumstances and dialogue that made me smile most. After two weeks of no contact, Eleanor sneaks to see Hil in the middle of the night to “have an affair.” She is a gem, and I love her deliberate way of thinking and her take-charge action. It may have taken two weeks for Eleanor to decide that her desire for Hil is stronger than it being a bad idea, but at that moment, she charges in without consequence. Their word play after – deciding whether or not to continue on – was equally delightful. I adore this couple.

Once Hil and Eleanor have found their way to be together, Eleanor is accused of a horrible crime. With her life on the line and a very short time to prove her innocence, the story ratchets up the intensity and I couldn’t put down the book. At this point, I was heavily attached to the couple; therefore, I was “sick with worry” over what would happen. It created a great tempo change within the book and made for an exciting conclusion. I enjoyed reading Hil work through the clues to solve the puzzle, although I was slightly disappointed that there wasn’t more of a tie-in to events earlier in the book.

Overall, Devil in My Arms is an enjoyable story. I adore Eleanor and Hil together. Their verbal sparring and dancing is as sexy as their mutual attraction. I’ve always had a thing for Hil, and to see his world turned upside down because of a woman is fabulous. Eleanor is his perfect match… Besting him and meeting him jab for jab, so to speak. Their courtship is entertaining and a joy to follow. I became heavily invested and emotionally connect to the pair. When the story moved to a whodunit mode after Eleanor is arrested, I was on the edge of my seat, trying to figure out how to save Eleanor.

Even though she is starving and destitute, Eleanor Enderby’s quiet beauty strikes Sir Hilary St. John speechless. He expects the woman he’s searching for to be skittish and plain. Instead he finds the picture of bravery—and willfulness—in his quarry. She gives away little, but Hil can see something is terribly amiss. And though he cannot say exactly why, he is determined not to let her come to more harm than whatever it is she has already survived.

Six months later, Eleanor believes she has finally found safety from the tyrant she risked her life to escape. Thought to be dead by society, Eleanor is ready to be reborn as someone new—someone whose life will never again be tied to the fate of one man. But her smoldering savior seems unwilling to leave her unprotected for an instant. Despite the threats he thinks he sees coming, the real dangers Eleanor faces in Hil’s arms are unmistakable: temptation, seduction, and maybe even love.

Purchase Info:
Devil in My Arms (The Saint’s Devils #3)