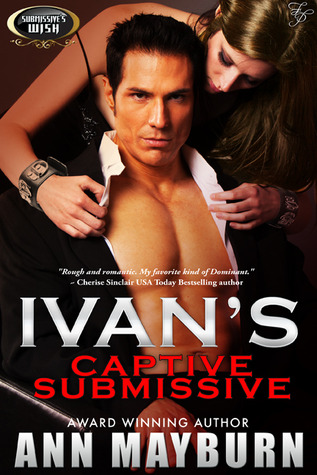 Gia, a trained submissive, hopes to find a true Master to fulfill her sexual and emotional needs, so she offers herself at a charity auction where she will be “given” to a Master for one week. Ivan is immediately taken with Gia and wins her at the auction. With the hopes of fulfilling one of Gia’s fantasies, he comes to her as her new Master’s bodyguard, and then follows through on an elaborate kidnapping scheme. While he thinks he’s making Gia’s abduction fantasy come true, Gia mistakenly thinks she’s truly been kidnapped, yet she is completely attracted to Ivan.

Ivan’s Captive Submissive is an entertaining and enjoyable ride into the emotional and sexual world of a Master/submissive (M/s) relationship. The story revolves around meeting Gia’s sexual desires and needs, and there is a LOT of sex in the book. At times the sex is sensual and loving, while at others it is hardcore and needy, but at all times it is about the M/s relationship. If you are someone who is uncomfortable with sex that may push boundaries, then this story is not for you. And while there are a lot of sexual scenes in the book, they are all part of the greater story and help define and build Ivan and Gia’s relationship.

While a “forced” or “consent/non-consent” fantasy does not appeal to me, I was okay with what was happening because I knew it was all a ruse. It was fun knowing, via Ivan’s POV, that he truly believes Gia is aware of the role-playing. I enjoyed the M/s play and growing relationship between Gia and Ivan, but the fact that she is so conflicted and thinks something is wrong with her needs and desires, made it hard to enjoy completely. It was difficult to read the gritty emotions of Gia who felt so messed up because of her situation. I like how Ms. Mayburn allowed the storyline to play out, but didn’t drag it on and on.

At times the sex scenes read a bit like a “how to” manual as Ivan taught Gia more about her desires and fueled her submission. When this happened, it tended to take me out of the emotional side of the story and caused a bit of disconnect with the characters. With that said, these situations tended to give way to touching emotional scenes. In the end, as the relationship solidified, I found my emotional attachment to the pair cemented.

One thing that did bother me is Gia’s immaturity. While I was completely head-over-heals for Ivan, it took time for me to enjoy Gia’s character. I understand that most of what was going on was new for Gia, but as a trained submissive and a strong woman, I felt she flew off the handle and made a couple of rather rash decisions. She was also distrustful of Ivan’s words, making me frustrated. I think it’s because the reader is privy to Ivan’s POV, giving knowledge of his sincerity and true nature.

But with all that said, Ivan’s Captive Submissive is a love story, and I do like how the couple had to work for their relationship. The story hit a number of emotional buttons for both individuals, and watching them work through each one made the end result all the more satisfying.

When Gia Lopez signs up for the Submissive’s Wish Charity Auction she has no idea that she’s about to be bought by a Russian Dom who will do anything to make her fantasies come true. Including staging an elaborate kidnapping that Gia believes is real. Ivan is instantly drawn to Gia and he wants to be the best Master she’s ever had. As he spends time with Gia he begins to have intense feelings for the strong, independent, and sexy American woman. He’s only won a week of her service but wishes to keep her forever.

Unaware of Ivan’s true feelings, Gia fights her growing emotional attachment to him. All she wants is to settle down with a nice Dom in the United States, continue her career, and live a normal life. However, Ivan sets a plan into motion that will push Gia to all of her limits and take her on a global journey of self-discovery, extreme pleasure, and love.