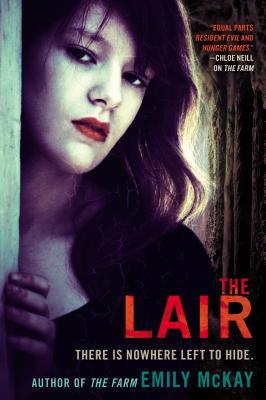 The Lair is the exciting sequel to the YA novel, The Farm.  Although The Farm wasn’t exactly what we were expecting, we liked it. But right from the start, The Lair was a gripping read which we enjoyed, and we look forward to more.

The story starts off near where The Farm ended.  Mel has been turned by Sebastian, and he has taken her under his wing to “raise” her.  For the first time in Lily’s life, she is not only not watching over her sister, but they are physically separated.  However, being with Carter, softens the blow.  Gikany and Una enjoy that we continue to have both Mel and Lily’s points of view in The Lair.  It was fascinating to observe Mel’s transformation and her time being mentored by Sebastian.  The abilities of vampires seem to develop quickly.  And, as we observe through Mel’s eyes, we question whether Sebastian’s motives are entirely pure.

While Mel learns how to be vampire, Lily and Carter finally reach the home base of the resistance.  But all is (of course) not well.  Once they reach the base they realize something is not right…horribly not right.  We would love to say that they do get better, but who are we kidding.  This IS a post-apocalyptic world.  It does not get better… but it does spiral and twist in ways we did not expect.  Keeping us glued to the pages, we could not put down The Lair as we kept trying to figure out Sebastian with Mel and what on earth was going to happen with Lily and the choices she endures.  Let’s just say (we realize we are being utterly vague but we would hate to spoil things for you) there are arguments, break ups, betrayals and more betrayal.

We do enjoy Carter’s point of view, but Lily is the main narrator in The Lair with Mel giving us snapshots of her journey.  However, Carter’s point of view does add a richness to the overall world.  He is struggling with being the leader of the resistance without the abductura he was supposed to retrieve.  In Carter we see the epitome of a leader – calm, decisive, confident.  Someone anyone could follow and would.  However, through his points of view we discover he questions every choice, struggles with thoughts of the future while grieving his lost soldiers and worries who will be next.

Gikany and Una cannot wax on any further without fear of giving something away.  What makes The Lair so compelling is the surprise twists that take you off guard.  We feel that this novel is an incredible improvement from The Farm and well worth reading this series.  However, PLEASE read from the beginning.  The Lair is a true continuation and you will be lost without reading The Farm.  If you are looking for a gripping, heart racing, young adult adventure set in a post-apocalyptic world – come check out this series!

In the battle against the vampiric Ticks, humanity was slowly but certainly headed for extinction. For months, twin sisters Lily and Mel had been “quarantined” with thousands of other young people being harvested for their blood—food for the Ticks. Finally escaping with a few friends, the twins are separated—and must continue the fight on their own . . .

After making it to a resistance base camp in Utah, Lily learned to survive at all costs. But when a Tick attack decimates the fighters, Lily and her pregnant friend, McKenna, decide to make the hard trek north to Canada—and safety.

Meanwhile, Mel is being taught how to survive by the very vampire that turned her. Living without her sister is hard, but dealing with the fact that her autism was cured by the vampire bite is an even bigger challenge.

But when a monstrous betrayal places Lily in mortal danger, Mel must set out to find her, save her, and begin to unravel the empire of destruction that the Ticks have built.

Purchase Info:
The Lair (The Farm #2)

Reviews in the Series:
The Farm (The Farm #1)

3 responses to “Review: The Lair by Emily McKay”