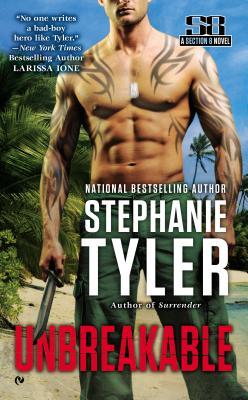 After killing off the bad guy (Rip) and making it back to New Orleans in the first Section 8 novel, Avery insists that everyone leave town to relax and think about what the future holds for the Section 8 team. Finally left alone with Gunner, Avery gets up the courage to tell him how she feels, and that’s when everything falls apart. James, aka Gunner, knew the moment he stepped onto Rip’s Island that his identity would be discovered. Gunner doesn’t want to return to the life he escaped: doing the bidding of crime lord Drew Landon, but he refuses to endanger his new Section 8 family, so he cuts ties and takes off. Now it’s up to Avery and the others to find Gunner and make him whole again.

Welcome to the high-octane, crazy ride that is Section 8. This group of loosely connected individuals found their way together after each was impacted by an evil man (Rip). They are a second generation group, and at the start of Unbreakable, they are contemplating the merits of staying together to make the world safer by running covert black ops missions off the grid. The story is told from multiple points-of-view, which can be a little confusing at times. I recommend reading the precursor story before picking up Unbreakable for a better understanding of the group and what’s going on.

Typical of Ms. Tyler’s military-suspense romances, our hero is a tough-guy, bad-boy. A man of few words, he’s rough around the edges and better at action than heart-to-heart talks. As the story unfolds, we learn that Gunner has lived a pretty miserable and unfortunate life. Briefly escaping once before, he was taken in by a warm couple and fell in love with their daughter. But after she was killed, he realized that a “normal life” was not for him. Gunner really works for me. He’s unapologetic when it comes to the choices he makes, which gives him a raw honesty. He is equally passionate when it comes to loving Avery. Although he puts distance between the pair to protect her, he loves her with a powerful intensity that makes me blush. I enjoy seeing Avery though Gunner’s eyes.

Avery is young, but not completely innocent. Her childhood, while better than Gunner’s by far, wasn’t all sunshine and roses. But she isn’t jaded like Gunner, which gives her the edge needed to save him from his boss, as well as himself. Her perpetual optimism kept me from ever getting too down while reading the story.

The bulk of the storyline revolves around Gunner’s former boss, Drew Landon. Although he is a big-time man of crime, he treats Gunner like a son. He also sends Gunner on missions to take down human traffickers. Yet he is responsible for some horrendous actions as well, such as killing Gunner’s first love and harming Gunner’s ex-wives. There is also a horrible torture scene. Stopping Landon permanently so that Gunner can finally be free takes over as the focus once the gang retrieves Gunner. The storyline has a significant twist, which is fairly predictable, but I wasn’t quite sure of the truth for a while. Although the twist is a good one, I felt the timing of when certain pieces of the puzzle were initially presented came a little too late in the story, making it feel like an afterthought.

While I enjoyed the story and its twists, I will admit that I had a tough time trying to piece together the timeline of events and how much time was passing while Gunner was gone from the group and even after his return. If you are not a stickler for such things, it probably won’t bother you the way it did me, but I found myself rereading passages trying to piece together a timeline, which confused and frustrated me.

In the end, regardless of my frustrations over the timeline and flow of the story, Unbreakable is a solid action/suspense story. I like the characters and enjoyed seeing them come together as more than a team. Ms. Tyler pens a good balance between the tense situations and low-key downtime – action and romance. And with the way this one ended, I’m curious as to what is next for the Section 8 team.

A cabal of operatives with dangerous pasts team up to work black ops missions. Their weapon: deception. Can they help one of their own before he goes too far?

When Gunner agreed to help out Section 8, he didn’t realize he’d be pulled back in to the shadowy world he’d thought he’d escaped forever. The son of double agents, Gunner was initiated at a young age into the cold world of espionage when his father forced him to work for international smuggler Drew Landon. And when Gunner’s past with Landon threatens the other mercenaries, and most importantly, Avery, he makes an impossible choice…and disappears.

Avery’s not willing to give up on Gunner. The attraction between them has been there from the start and she rallies Section 8 to help him. She knows there’s only one way to keep Gunner safe: fake his death and take him off the grid. But when she finally locates him, Gunner is a changed man, harder, more desperate, and on the edge of self-destruction. And only Avery can find a way to free him from Landon—and from the demons of his past—before it’s too late.