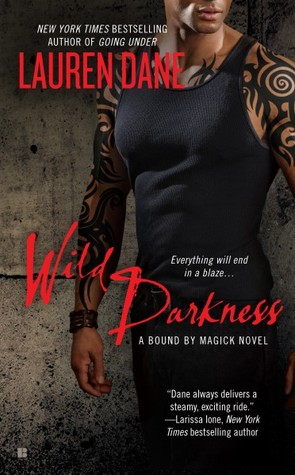 Wild Darkness was a fabulous conclusion to Lauren Dane’s Bound by Magick series.  Even though the storyline resolved – the Faine and Helena storyline, as well as that of the Owen/Genessee witches – I still have soooo many questions about the universe!  I guess that’s a sign of some magical storytelling, huh?

I fell in love with Faine and the Lycians while reading Going Under, the third book in this spin-off of Ms. Dane’s Cascadia Wolves and de LaVega Cats series.  I couldn’t wait to get this title, and I’ve been waiting ten months for it.  On. Pins. And. Needles.  I knew we’d be reading Faine and Helena’s story, and there was no way anyone could talk me out of reading this book.  I was so happy when we were offered the opportunity to review it.  Early.  Before release. 🙂 <Insert Giggles of Glee Here>

I am mesmerized by the world-building with this series.  The focus on the witches and the way their magick is generated, cultivated, and used is phenomenal.  While Wild Darkness could function as a stand-alone title, readers will get much more out of the book if they’ve read the first three titles in the series.  They’ll be able to connect with the characters that make appearances, and appreciate the intimacy of several scenes.  I see so much potential for additional titles, based on plot developments within this book!  I am, however, happy that I can continue to look toward the de La Vega and Cascadia series as a ‘fix’ for my need to see more of the intricate and engrossing universe Ms. Dane has created.  I want to know more about all the characters.  I want to see how things go with them in the future.  There’s questions I’ve formulated to which I want answers!  Yup.  That’s the classic signs of reading a great book!

I could seriously gush about every major plot line in this book.  Which would make my review as long as the novel itself.  No one wants that.  Let’s start with the Others.  In the previous titles in this series, Ms. Dane brought us the Magister, an evil being that sucked the magick out of everything and threatened to eliminate the magick that makes this universe crackle with emotion.  Defeated in book 2 of the series, the Magister is a side-line threat once again.  The Others – witches, were-beings/shifters, vampires – have been ‘outed’, and this book picks up where Going Under left off.  Molly, the PR guru from one of the witch clans, is in casts from her recent attack, and Gage isn’t leaving her side.  I love the continuity between books.  There’s a war simmering below the surface, and as we’ve seen throughout history, no one will win if the Others are relegated to second-class citizens, stripped of their rights as Americans.

Enter Helena Jaansen.  Sister to Lark (heroine of Chaos Burning).  I think what most fascinates me about Helena is the fact that she’s the epitome of efficient, yet she sees herself as utterly lacking due to the haven incident.  The inner conflict that she’s working through in this title is maximized when Faine Leviathan announces his intentions regarding Helena. Which freaks her out even more.  Coupled with increased responsibility for the Others and a few ass-kicking episodes tossed in to keep things interesting, Helena works through her inner conflict and manages to still keep it all together enough to resolve the major, over-arching conflict for the title.  The discrimination against the Others.

While Helena is fighting for truth, justice and the American way, Faine wants to protect her like no one he’s ever encountered before in his life.  Helena is his KEY.  His Ne’est.  His Alamah.  It’s obvious from the beginning that this story is headed for HEA territory.  Faine just needs to give Helena the space necessary to wrap her head around the fact that they’ll be bound in an ancient ceremony on Lycia.  There’s many benefits to binding.  Lark tells Helena about them.

Then, there’s this plot line about Toshio Sato and Delilah Sperry.  Both senators.  Delilah is a werewolf.  They’ve got serious chemistry.  I like the direction of this plot line, but I want to see MORE!!!

Now.  Faine.  I’ve been waiting for Faine since January 2013.  Seriously.  The way he reacts and interacts with Helena is a-maz-ing.  Lycians have this longevity thing.  Faine is like 400 years old.  He’s had relationships in his life, but nothing like what he feels for Helena Jaansen.  He is intrigued by the way she makes him feel.  By the way she handles her business of security for the witches.  By the way she lets him take care of her, as a personal guard.  Early on in the title, he realizes she’s his ne’est – his key.  He feels whole around her in a way he’s never felt before.  He just needs to be patient and let her realize that she needs him just as much as he needs her.  Watching this relationship unfold – the way Faine was firm yet gentle with Helena – was one of the most beautiful love stories I’ve read in a while.  Set against the backdrop of potential civil war, there were a lot of things stacked against Faine winning over Helena’s heart.  A lot of ‘what ifs’.  Fortunately, this persistent yet grumbly puppy dog persevered – oftentimes against Helena’s initial wishes – and did his job.  He kept Helena safe.  Something no one else (besides her dad) has ever done for her before.

The end of the book.  Um.  Wow.  It was amazing and unexpected on a certain level, and utterly perfect against the backdrop of uncertainty that ran throughout the entire novel.  Honestly, I really need to see more of this universe.  I need to know that things will ultimately be OK.  Even if I have to see it as a snapshot in a new series.  Bound by Magick has been a fabulous series, and I am eager to watch more elements of this world evolve in future installments of the Cascadia / de LaVega titles.  See Ms. Dane’s FAQ – scroll down to BOOKS, then the link to Wolves/Cats/Magick & click for more information.

*** Special thanks to Lauren Dane for talking me off the ledge when I thought I wouldn’t see these kick-ass witches again, and for making sure I had all the info to keep up with the Bound by Magick peeps!***

The bombing that almost killed Owen witch Molly Ryan has worsened the tensions between the humans and the Others. While the Others desperately campaign to prevent the passage of a law that would strip their people of all rights, the human separatists develop an agenda far worse than anyone imagined. With her position more precarious than ever, security head Helena Jaansen finds herself relying more and more heavily on

her personal guard, Faine Leviathan, and, despite her better instincts, falling more deeply into the intimate connection that they share.

As Helena and Faine’s explosive passion grows, a deadly separatist plot is discovered, one which could bring ultimate destruction for the Others, and war breaks out between the two opposing factions. With the Others forced into hiding, Helena must overcome her fear of repeating past failures to save her people—and her heart—before it’s too late…