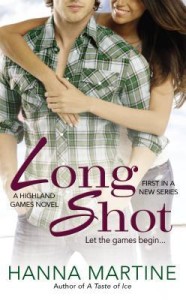 “Leith MacDougall, what a surprise!”  Evidently Sue McCurdy did know how to smile, and it was when the town’s celebrity was in touching distance.  Today’s Syracuse T-shirt was navy blue, and the age-inappropriate hairstyle was pigtails sticking out from just behind her ears.  The mayor stood in the open door of Town Hall, beaming right over Jen’s head at the big man at her back.  “To what do I owe this pleasure?”  Leith moved to Jen’s side, crowding her on the small front stoop, their arms touching briefly.  “Just dropping off Jen,” he said.

Sue blinked at Leith, then shifted a confused glance to Jen, as though seeing her for the first time. Jen understood.  Leith somehow managed to consume the atmosphere and draw eyes wherever he went.  If he were a true celebrity, his pockets would be full of women’s underwear.  Dimly, Jen wondered if he’d ever found the pair of hers they’d lost in the dark woods one night a long time ago.

…Maybe he’d finally forgiven her.  Maybe he hated her and was doing a damn fine job of covering it up.  That second thought made her want to throw up.

“Thought I’d come say hi, too,” Leith said to Sue, “and to let you know Chris’ll be taking over your yard when I’m gone.”

“Are you helping Jen?” Sue asked Leith, her eyes brightening.  “Because that would be just fantastic.”

The smile he gave Sue was pure gold.  “Wish I could, Mayor Sue.”

The mayor leaned forward conspiratorially.  “But you’re going to throw, right?  Your last hurrah before you leave us for good?”  Leith was laughing in a genial, polite way until Sue added in a syrupy voice, “It’s what your father would have wanted; I’m sure of it.”

Maybe Sue didn’t notice, but Jen did – that little hiccup in Leith’s laugh, the slight narrowing of his eyes.  Then those were gone, leaving Jen to wonder if she’d actually seen them.

“I’m sure he would have,” Leith slowly replied, “but I just haven’t been training like I should. Out of practice, you know.  Besides, I’ll be gone by then.  The Carriages – you remember them?  Rory and Hal, the Hemmertex president?  Anyway, Rory called me out to Stamford to redesign their entire property.  I’ll be going back and forth until I find permanent digs down there.

Now it was Jen’s turn to blink.  Not that he owed her any information of the sort, and not that they’d really talked about anything the past, oh, hour or so since they they’d reconnected, but she was still shocked to hear it.  Leith MacDougall was really up and leaving Gleann.  It wasn’t just talk.

Sue stood back, a girly put pushing her bottom lip forward, and sighed.

“So,” Leith said to Jen after an awkward pause. “you good here? Or do you want me to stick around in town and take you back when you’re done?”

Jen shook her head. It was only a fifteen-minute walk back to Maple, nothing by New York City standards, but that wasn’t why she said no.  “I want to go see Aimee when I’m through here.  Thanks, though.”

“Kay.” He touched Sue’s arm in good-bye, but didn’t reach for Jen.  Just gave her a weird, tight-lipped grin, eyebrows raised, and then bounded back down the steps.

She didn’t exhale until his rumbling ruck made a U-turn and headed up toward Maple.  He didn’t once look back.

“So what can I do for you?” Sue’s arms folded under those boobs, and she glared down at Jen with a look she knew all too well.  Like Jen was seventeen again and she’d given the mayor’s three Yorkies the wrong food at the wrong time of day.

Guess what?  She wasn’t seventeen anymore, and she wasn’t doing this for Sue.  Above everything, Jen was a professional.  “I have a bunch of questions for you before I give my recommendations to the city council.  Do you have time?”

Sue flattened her back to the wall to allow Jen to pass, but Jen still advertently brushed against that chest.

“He’s leaving, you know,” Sue said as she turned into her office at the front of Town Hall.  “It would be kind of stupid to start something with him again.  I remember how you two were back in the day.”

Jen froze in the doorway of the cramped office, flabbergasted and unable to speak for several moments.  Sue flicked annoyed eyes at the windows, as if Jen didn’t already know she was talking about Leith.

“Thanks for the advice, Sue, but nothing is starting up between us again.”  Jen sat in the lone chair opposite the mayor’s saccharine statue of three Yorkie puppies.  Tugging her laptop out of her purse, she muttered under her breath, “Glad you noticed, too.  That’s not creepy at all.”