Sins of the Lost 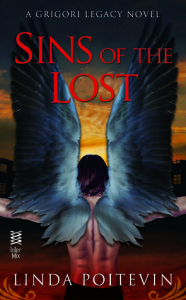 She found Michael seated by the window in the back of the crowded café.  Sliding into the chair opposite, she shook her head at the waitress’s offer of a menu and asked for coffee.  Michael declined to order anything.  With a huff of displeasure, the harried-looking woman stomped off to serve other, presumably higher-paying clients.  Michael cleared his throat.

Alex raised a brow.  Small talk?  From an angel?  She reached past him for the sugar dispenser, taking in the stiff lines of his shoulders, his fists resting on the chipped tabletop.

“And you’re not here to exchange pleasantries,” she replied.  “So you might as well get to the point.”

“I thought you said my part in your affairs was done.”

“It was supposed to be.  Something has changed.”

It was Michael’s turn to raise an eyebrow.

She cast a look at the crush of breakfast patrons crammed into the restaurant.  At the table nearest them, a lone man turned the page in his newspaper, giving it a snap to straighten it out.  She lowered her voice.

“One of the pregnant women turned up dead.  The baby was ripped out of her.  Detective Henderson says there have been others.  Five altogether that we know of.  If I had to guess, I’d say the Fallen Ones are to blame.”

Beyond a brief flash of annoyance, however, the Archangel looked unperturbed.  “I told you, the Nephilim are your concern, not ours.  That’s not why I’m-”

She slammed down the sugar dispenser.  “Maybe you didn’t hear me right.  We’re already dealing with the Nephilim problem, Michael.  Women across the globe are terrified of becoming pregnant, demand for DNA testing has soared beyond all capacity to provide it, and religious fringe groups are all over the Internet spouting off about the end of the world being nigh.  But this?  This is the Fallen Ones killing human women.  That sounds like direct interference to me.  The kind of interference you’re supposed to have rules about.”  Michael regarded her.  She scowled back, silently daring him to say what they were both thinking: that the women would die anyway.  He sighed.

“Fine.  I’ll increase our surveillance.  Now can we please move on?”

Hesitation flickered across her companion’s face, just enough to make ice crystals form in her veins.  Hell, maybe she should have driven away when she had the chance.

I could still leave.  Before he tells me why he’s here, I could walk out.  Just like that.  Stand up, pay for my coffee, and-

“We need Seth to take back his powers.”

The air hissed from her.  “Excuse me?”

“His choice has had repercussions-”

“Stop.”  Holding up both hands against his words, she leaned back in her seat, as far away from him as the chair would allow.  “Why hasn’t Seth told me this?”

“You haven’t spoken to him?”

“I thought it best to speak to you first.”

“Then this conversation is over.”

“You don’t understand.  The world-

“No, you don’t understand.”  She glared at him. “You wanted to kill him.  His own mother wanted to kill him.  You would have cut him down where he stood in that alley if Aramael hadn’t helped me get to him, even after you promised to give me time to help him.  You lied.  To him, to me-” She broke off, remembering their very public location.

“I did what was necessary,” Michael growled.  “You don’t know all that’s going on-”

“And I don’t want to.  The only reason you’re coming to me is because you know Seth won’t give you the time of day on this.  He made his choice, and you made yours.”

Alex slammed a fist full of change on the table beside her untouched coffee.  She stood.  “You told me once that I was done with your affairs, and now I’m telling you.  I’m done.  And so is Seth.”

Iron fingers clamped on her wrist.

“If Seth doesn’t take back his powers-”

“What, you’ll put out an assassination order on him?” she hissed.  “Oh, wait, I forgot.  You already did that.  For God’s sake, Michael” – how ironic that she should invoke the Almighty’s name at a time like this – “you’ve done enough to him.  You know that, or you’d be talking to him, not me.  Just let him go.  Please.”

“Then grow a set and talk to him yourself.  Because I’ll be goddamned if I’ll do your dirty work for you.”  Tugging free, Alex pushed past the man with the newspaper and stalked out of the café.