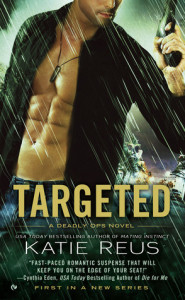 “What is this place?” Sophie finally said as she slowly pulled out the pepper spray from her pocket.  He’d parked in between two unused warehouses he’d scouted out earlier.  Bayside Marketplace wasn’t that far from where they were – hell, he could actually see Port Boulevard Bridge jutting over Biscayne Bay – but for how quiet and desolate the area seemed, they might as well be a thousand miles away.  He glanced at her hand and shook his head.

“You can keep that if it makes you feel better, but you don’t need it against me.  In fact…” Jack reached down and lifted up his pant leg.  He handed her a simple revolver.  “Take this.  There’s no safety and you don’t have to pull back the hammer.  It’ll make for a smoother shot if you do, but it’s not necessary.  All you have to do is pull the trigger.”

Swallowing hard, she eyed him with surprise.  but she didn’t hesitate to take the weapon.  “Why are you giving this to me?”

“Because I don’t like that fucking fear I see in your eyes when I’d never hurt you,” he snapped, losing his tight control for a moment.

Her eyes widened, but she still held the weapon in her lap.  At least it was turned away from him.  “You still haven’t told me where we are.”

“Just somewhere to ditch this vehicle.”  He pulled out another weapon from under his seat.  Jack was all about backups.  He needed to call Wesley to have someone pick up the SUV and sanitize it, but now his only priority was getting Sophie to safety.

After popping the locks he gave a cursory glance over his shoulder, then froze.  There was a black Humvee gunning right for them.  With a warehouse on either side, they had nowhere to go.  Making a split-second decision, he pressed the button to open the sunroof.  He’d been in worse circumstances, but having Sophie with him now made his heart beat just a little faster.

Sophie looked back at him.  Her mouth dropped open, but before she could ask any questions, he pointed up.  “These guys are going to ram us and there’s nothing we can do.  As soon as we hit the water, you’re going to clear the sunroof.”

“What? What about you?” Panic laced her voice as she tucked the revolver into the waist of her skirt.

“Sophie!” he shouted, needing her to listen, needing to get through her adrenaline-jagged brain.  They only had seconds now.  In his periphery vision he could se the black vehicle closing in on them.  Instinctively he tensed, bracing for the impact.  This was gonna hurt like hell.  He prayed Sophie wouldn’t be injured too badly to escape.  He’d disabled the airbags – as he always did – in the SUV so at least they wouldn’t suffer under that impact.  “Promise you’ll climb out the sunroof.  I’ll be behind you, but I can’t worry about you while trying to save myself.”  Eyes wide, she nodded and slipped her heels off the moment before impact.  She still had her purse slung across her body like a satchel.  He wanted to tell her to lose it, but there was no time.

A jarring crunch wrenched through the vehicle.  Sophie let out a little scream as her body slammed forward, but she held on tight as they were propelled toward the water.

“Why aren’t you shooting at them?” she shouted as the Humvee driver gunned the engine once more, shoving them inexorably toward the small pillars that wouldn’t stand a chance under the force of the two vehicles  She quickly jerked the purse off, but snagged her wallet from it as she tossed it to the floorboards.  Shoving the thin wallet down her shirt, she looked over her shoulder again, fear clouding her eyes.

He ignored her question.  “We’re going to go over in a second.  Through the sunroof, then swim east.  Swim as hard as you can until you find cover!  Don’t surface until you’re safe!”  There was a lip that curved over where the string of warehouses sat.  They had to reach it.

The SUV jerked forward again and the scent of burning rubber filed the air as they teetered and plunged over the edge.