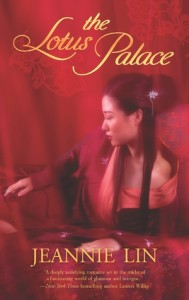 … Yue-ying went downstairs to fetch a plate of red bean cakes from the kitchen as it seemed the men would stay awhile.  When she returned, the old historian had turned the conversation back to the imperial court.

“This is an opportunity to advise the Emperor that he must change course.  Heaven has given us a sign.  Earthquakes and floods have ben known to topple dynasties,” the historian pointed out sagely.

Bai Huang was already shaking his head.  “A sign of what?  It sounds more like superstitious doomsaying,” he said with a bored look.

“What does it matter if it’s superstition or not?  If such a disaster gains the Emperor’s attention, then it can be used as a means to an end,” Taizhu argued.  “This morning’s disaster serves as a better excuse for a couple of friends to complain over tea,” Bai Huang contended, lifting his cup.  He attempted to drink, then frowned and peered into it, finding it empty.

As Yue-ying bent to fill the empty cup, Bai Huang startled her once again, halting her movement.

“What do you think, Little Moon?” he asked.

Mingyu’s mouth pressed tight at the casual endearment.  Yue-ying glanced at Bai Huang.  Dark eyebrows framed his face, giving him a serious expression that was contrary to his usual carefree manner.  The nobleman had never spoken directly to her in such company before.

“Has the earthquake provided you with any signs?” he persisted.

The room fell silent.  Old Taizhu affected a shallow cough and sipped his tea in silence.  Bai Huang was the only one unperturbed.  He continued to look at her, smiling crookedly as he waited for an answer.  His gaze on her was insistent, but not unkind.  Yue-ying looked nervously to Mingyu before answering.  “I was frightened at first,” Yue-ying admitted.  “But sometimes rain falls and sometimes the earth moves.  That was all it seemed to me.”

“Yue-ying.”  The courtesan’s command was soft, yet somehow sharp  “There is no need for you to remain here.  You are free to continue with your other duties.”

Yue-ying immediately set the pot down without refilling Lord Bai’s cup and retreated toward the door.

Mingyu regained control of the conversation quickly.  “Old Taizhu, have you considered that the earthquake might have been a warning to those bickering faction in court rather than our gracious Emperor?”

Bai Huang would find himself cut out of the conversation for the next hour, perhaps for the whole afternoon if Mingyu decided he deserved it.  They continued on to more pleasant topic: the upcoming festival on the double fifth and the number of candidates who had passed the exams that spring.

Was Lord Bai deliberately trying to provoke Mingyu?  Or had he simply forgotten that the courtesan was very strict about anyone being so familiar with her attendant?

As Yue-ing reached the door she turned to see Lord Bai staring at his still-empty cup.  After an expectant pause, he reached over to pour for himself since Mingyu wasn’t being amenable.  As he sat back, the young nobleman directed his gaze across the room and  caught her watching him.  He raised the cup to her in salute, eyebrow lifted.

Her heartbeat quickened and she swallowed past the dryness in her throat.  Yue-ying might have been unaffected by his beauty, but she wasn’t completely indifferent.  Any other woman would have been flattered by his show of interest, but she merely turned, head held high, and exited the parlor.

Lord Bai knew exactly what he was doing.